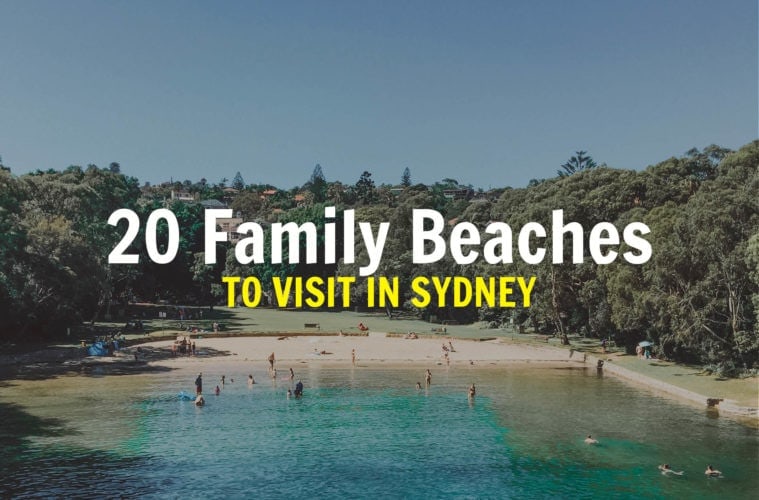 We’re here to help you find some of the best family beaches in Sydney as it can be hard to find some swimming spots without waves!

Luckily, Sydney also has plenty of beaches, and ocean & harbour pools with calmer waters so if you’re not a fan of the waves, this post is also for you. If you have children, you’ll be pleased to know many also have playgrounds close by and other kid friendly joys.

Seana Smith from the awesome Hello Sydney Kids brings you this post which includes 20 of the best family beaches in Sydney including some of the best beaches for shade as well.

Save for later and pin below. 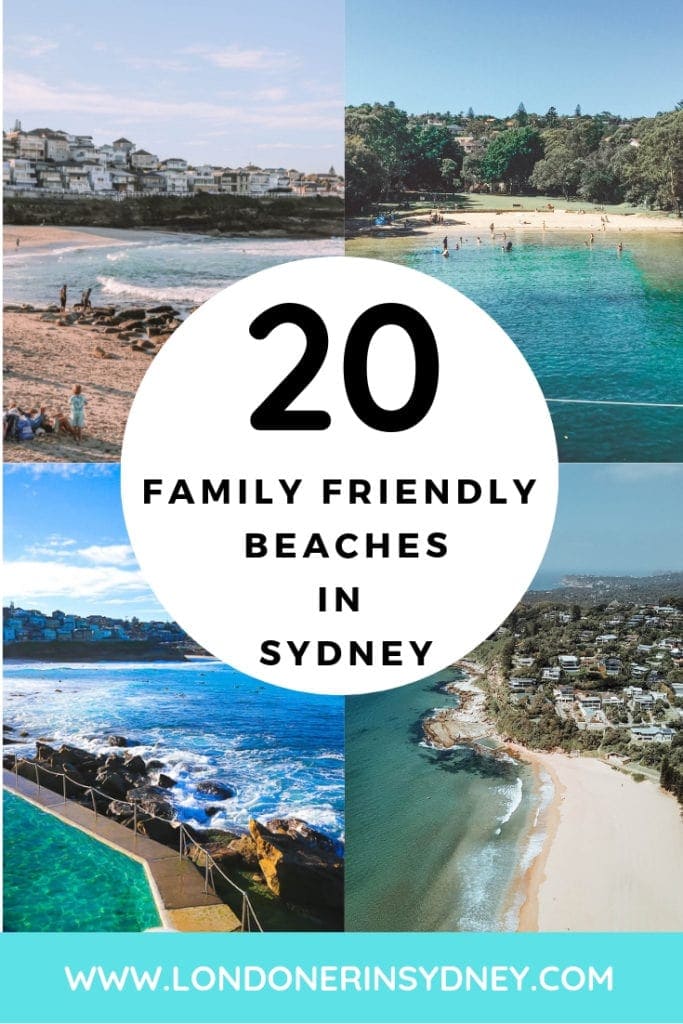 The Northern Beaches and Pittwater

Most of the Northern Beaches have big surf but they also have wonderful rock pools built into cliffs to the north or south of the beach itself. These rock pools are top spots for tots and have usually flat calm waters. Kids do love to splash in the surf at times too and so long as they stay between the flags, and with their carers close by, they will be fine. 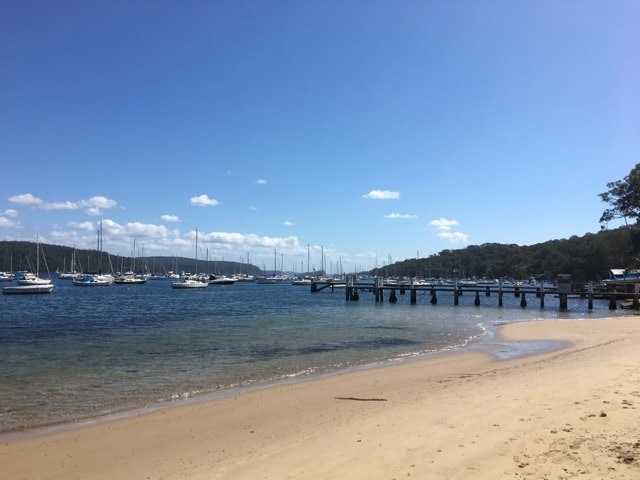 The sheltered beaches of Pittwater are ideal for little kids so we’re letting you know about the little gem of Clareville Beach. Make sure you park close to the sand and enjoy splashing in the gently sloping beach at Clareville. Kids will love watching sea planes cruising along too. 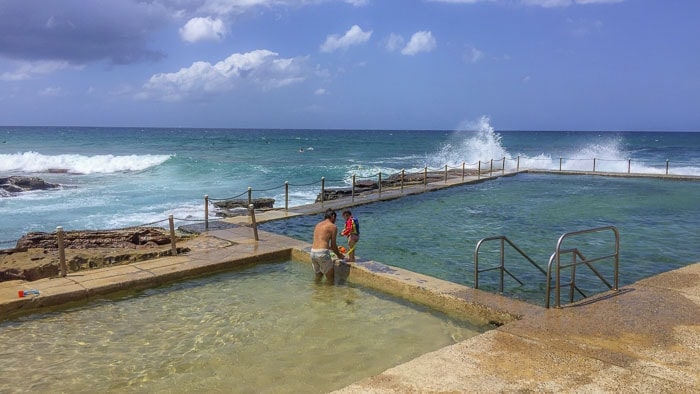 Just across from the bustling village heart of Avalon (locals call it Sydney’s Byron Bay) is the large sweep of golden sand that is Avalon beach. The surf can be big, but just pop over to the rock pools and there’s plenty for kids to do.

There’s a children’s own rock pool plus plenty of rocky outcrop crabs scuttling around the rock pools by the beach. The café in surf club called Beach House Avalon has splendid views and serves meals, drinks and ice creams. 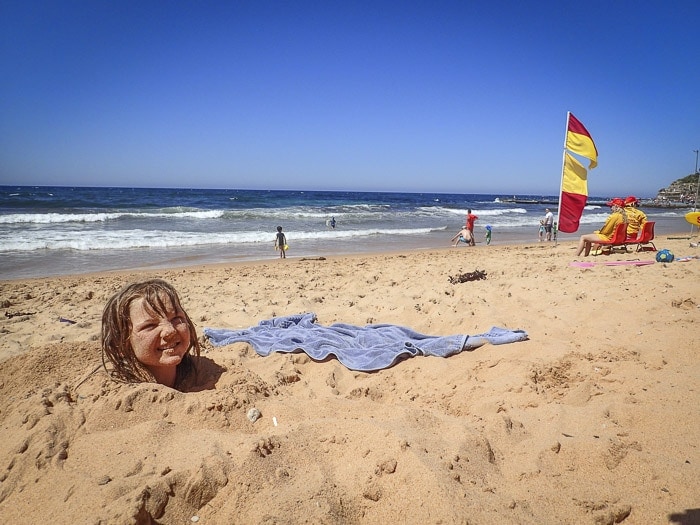 Collaroy has a truly magnificent playground right beside the beach – it’s a destination in itself! There’s also a 50m rock pool and beside it a kids pool. Check out the little beach beside the rock pools as it’s much more sheltered than the larger surf beach. 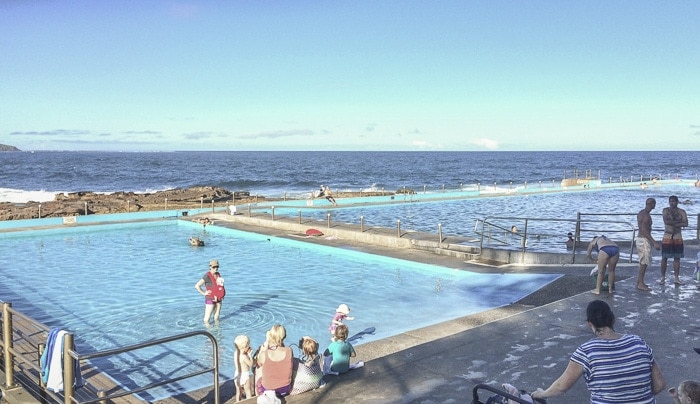 Dee Why has a terrific bright blue children’s rock pool beside the main 50m lap pool. This can get very busy on hot days. The south corner of the beach can be a sheltered spot too. Then there is the playground up on the reserve but we love Dee Why for the fish and chip and ice cream shops plus cafes and restaurants right across the road from the beach.

Related post: 9 wild swimming spots in Sydney you had no idea existed 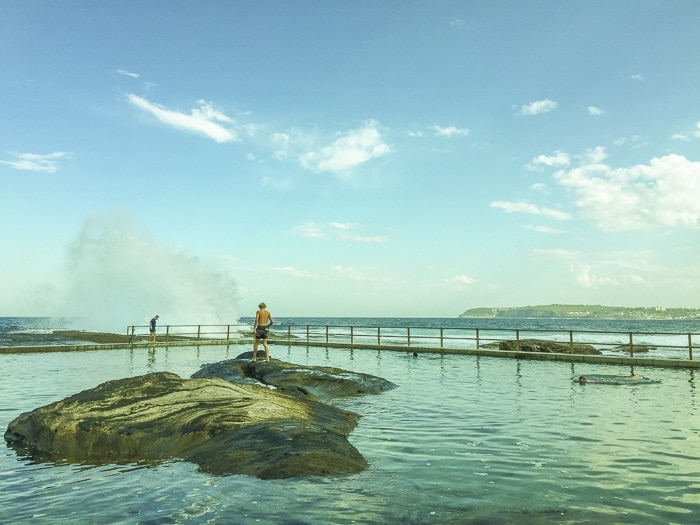 If you are looking for a wee adventure get over to North Curl Curl. There are caves in the rock cliffs for kids to explore plus a hike across the cliff tops to the pool if the tide is high. The pool here has a rock in the middle and many more fish than other rock pools.

Tip – do not touch the blue ringed octopus if you see one. 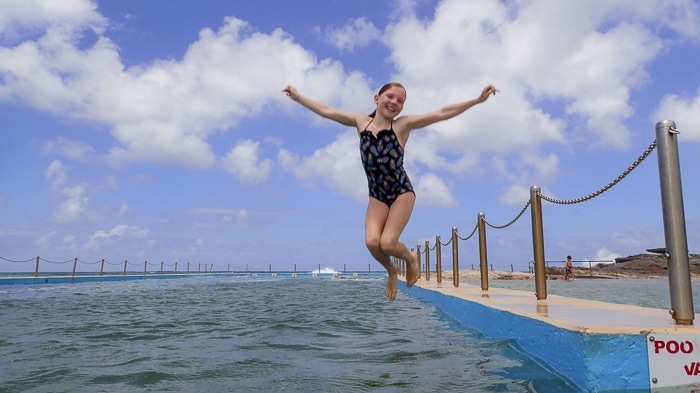 South Curl Curl has many great spaces for kids to splash around in the fab rock pool here plus a mini island to play on. The surf can be wild at South Curly but the rock pool is fab and the cafe at the surf club has magnificent views. There’s a boardwalk walk south too. 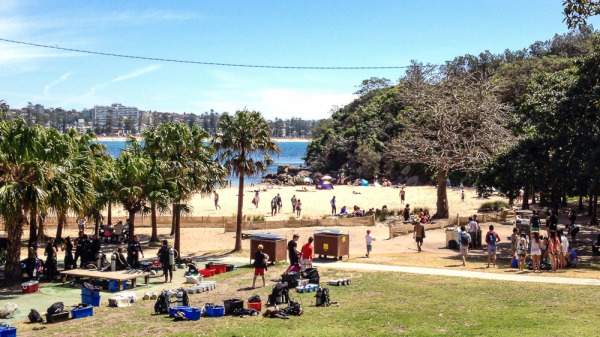 The most southerly of the Northern Beaches is just a short stroll from Manly along a beautiful walkway. There’s a sweet rock pool called fairy Bower along there too. Shelly is very sheltered with an abundance of marine life which makes it a magnificent place for learner snorkelers. Make sure you eat at the beautiful Boathouse when you’re there too.

The lower north shore has some fantastic beaches for kids in Sydney because most of them sit around the harbour meaning there aren’t any waves. 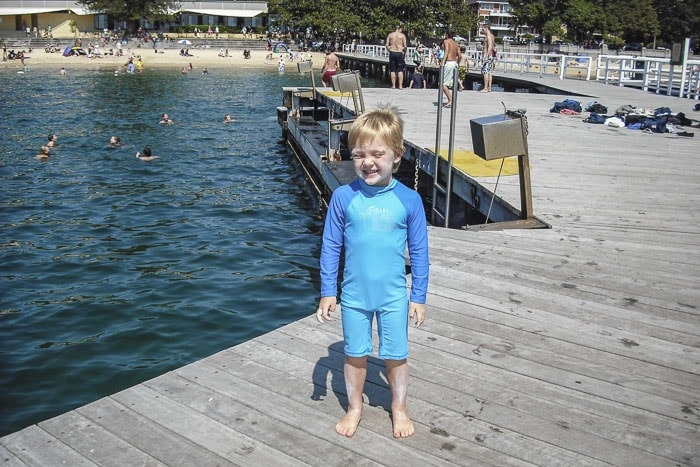 There are in fact several beaches at Balmoral, plus the delightful promenade and even a tiny island to explore. The netted baths area is the prime location for families as it is close to the playground and café. The rocky northern end of Balmoral, where the Beach Club is, is terrific for snorkelling. 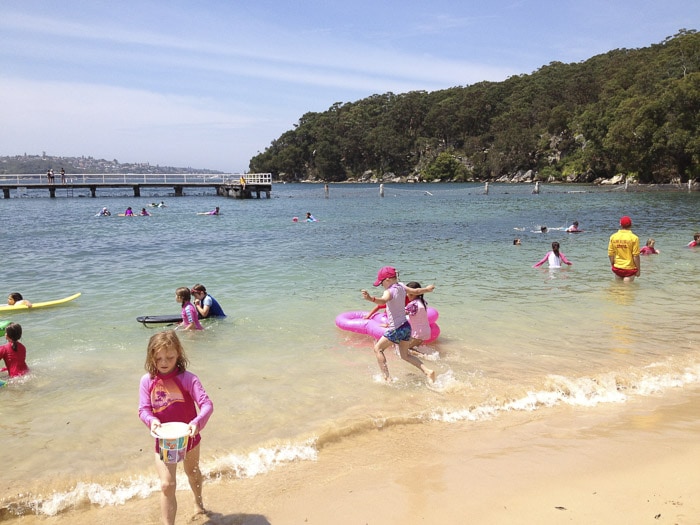 The fantastic playground, the huge reserve and the exciting baths and beach make Clifton Gardens a beach to spend a whole day at. Kids love leaping into deep water from the boardwalk that surrounds the baths. You can even get a coffee at the little kiosk and ice cream vans make regular calls. 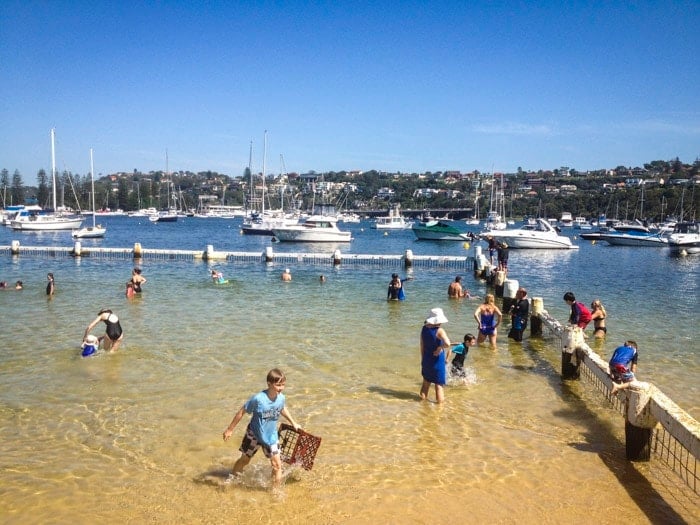 Clontarf is excellent for families as there’s a netted swimming baths which is pretty shallow, plus a really terrific playground slap bang beside the beach.  There’s also plenty grassy areas and trees to have a picnic and a game of cricket. And there’s a lovely café/restaurants there too called Clonnys, good for family meals, and the kiosk for simple meals, ice blocks and drinks. 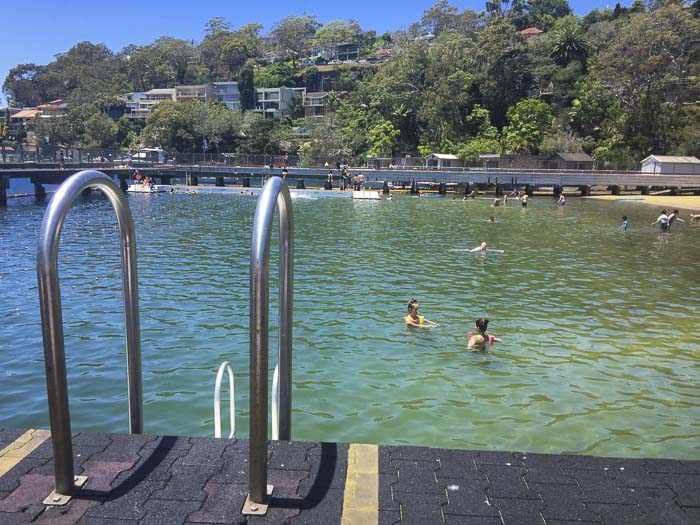 Northbridge Baths are a longtime institution, free to the public and open all year round.  There’s a very large netted swimming area with a beach which is spacious at low tide and a bit of grass behind. A boardwalk goes all around the Baths, terrific for leaping in. This is teenagers’ heaven and fun for younger children too. The walk back up to the car park can feel very steep after lots of swimming and playing.

Related post: 15 reasons why you absolutely must visit Avoca Beach 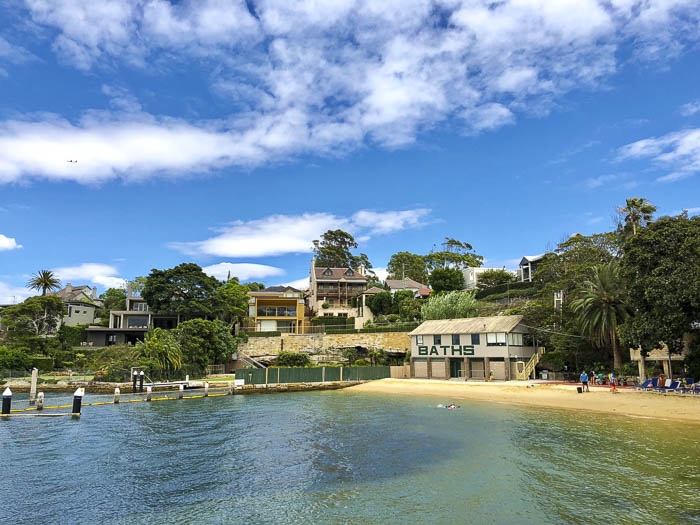 Greenwich Baths is a brilliant Sydney beach with shade as most of the beach is shaded for the majority of the day. It also includes a large netted baths area and there’s a cafe here if you need to grab anything.

This is a pay-to-enter Harbour Baths and is only open for half the year, roughly October – April. Parking can be tricky and you need to walk down steps, but once down at the Baths you can while away the day easily, enjoying the lovely views and the delightful feeling of seclusion.

Some of the Eastern Suburbs beaches are very wild such as Tamarama for example. But there are a few which work very well for families too including some of the best rock pools in Sydney. 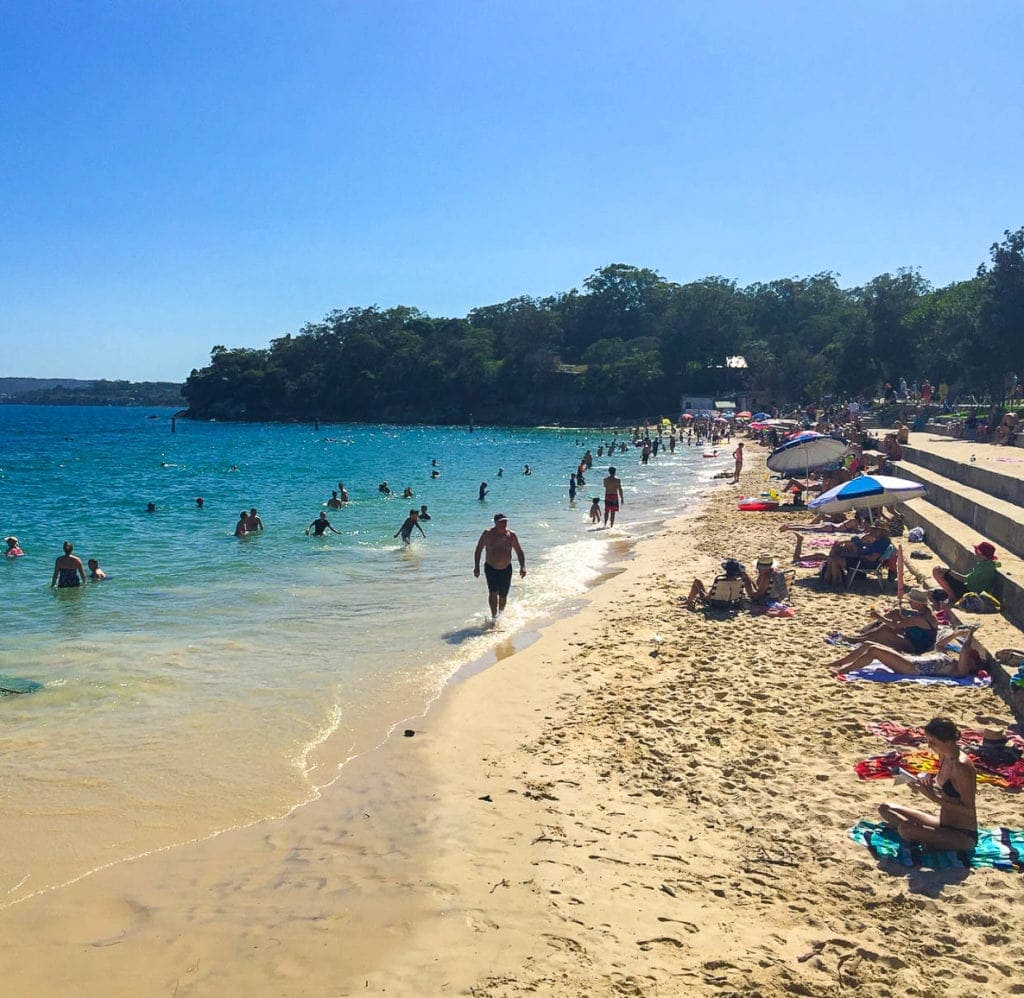 Do not be put off by the name!  Sharks are not regular visitors here but even if they were there’s a sharkproof netted swimming area to splash in. Within the lovely Neilsen Park this beach is very scenic and with the café and kiosk just behind and huge spreading fig trees, it’s a terrific picnic spot. 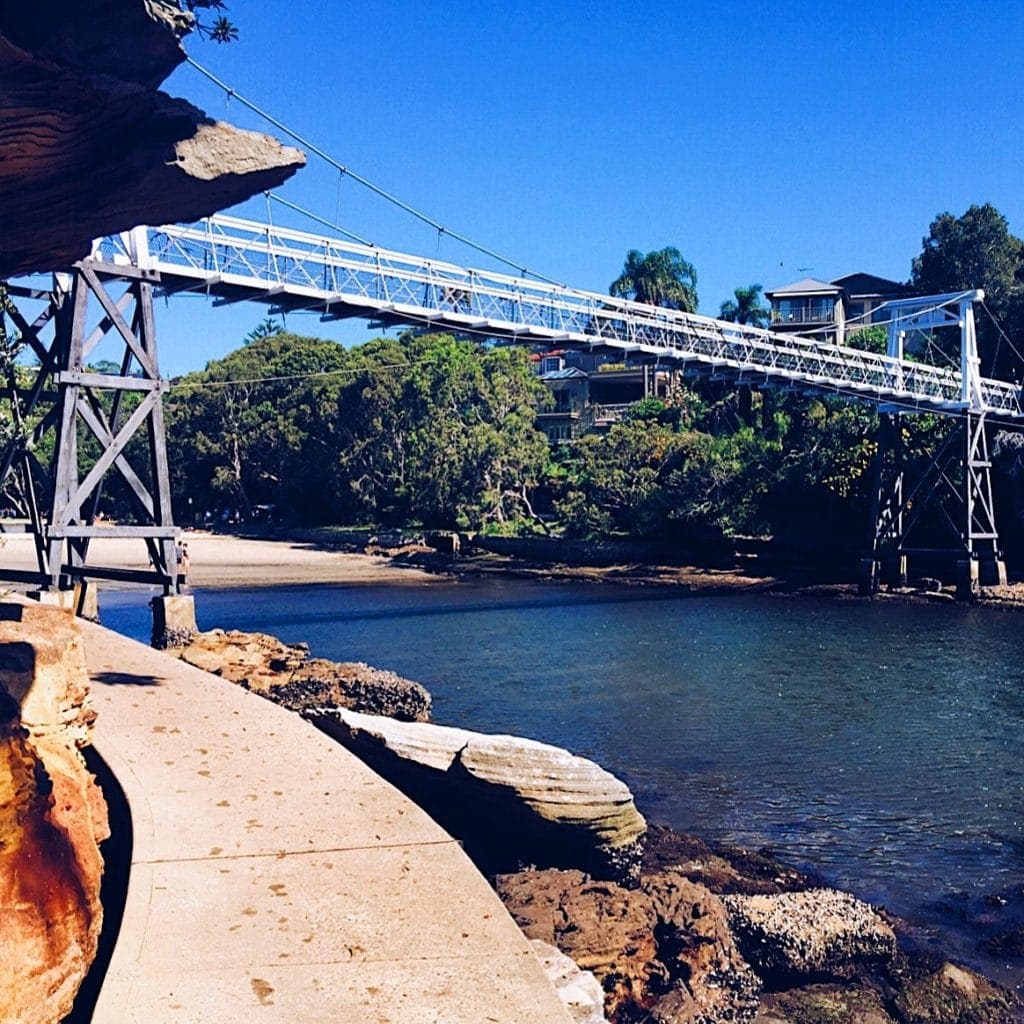 What a tiny hidden gem we have here, tucked away in Vaucluse. Get here early to find a handy parking spot as it does get busy. There’s a lovely netted beach, snorkel out to look for sea horses. The reserve has a playground and a kiosk too. You’ll feel totally removed from the bustle of the big city at this small but perfectly formed Harbour hideaway. 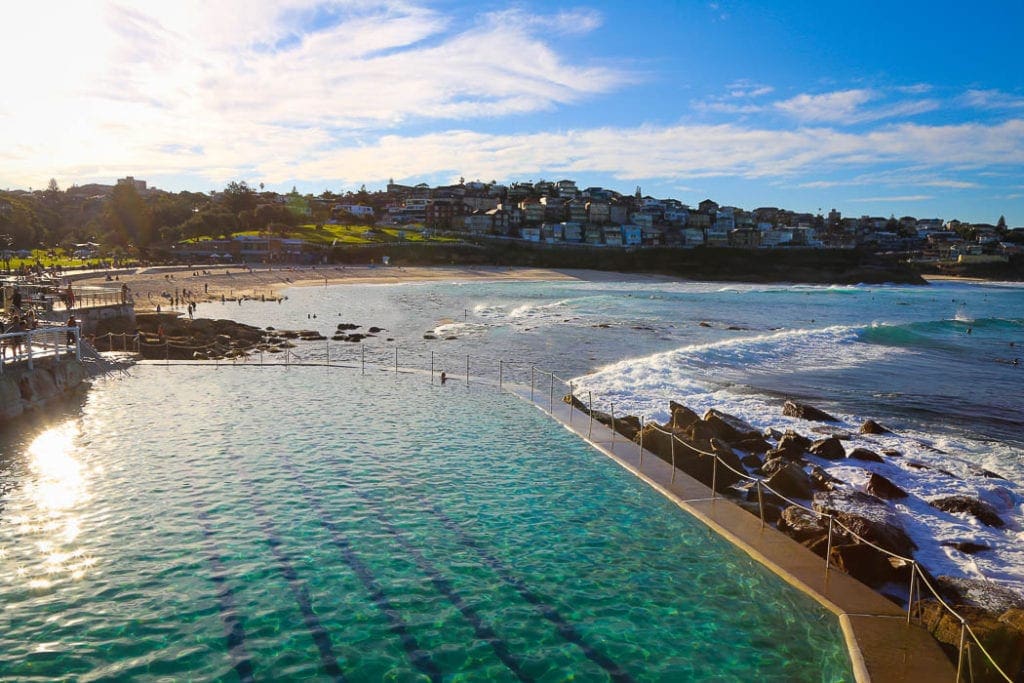 Bronte has to be crowned as the best of the Eastern Suburbs ocean beaches for families with babies, toddlers and preschoolers. The only drawback is the scarcity of parking. Arrive early or bring two adults so that one can be dropped with kids and bags whilst the other finds a parking spot.

There’s a lovely beach here, plus a natural rock pool called the Bogey Hole and a proper rock pool too. Add in a large playground and heaps of grassy space to picnic and play and you’re set for a super Sydney beach day. There’s a small beach at the very end of the bay here at Clovelly and that’s where you will find babies and toddlers with their buckets and spades. Once children can swim then there’s the whole bay to explore, plus the swimming pool up at the side. The café does takeaways or sit inside and enjoy the views.

Related post: 4 secret gardens you have to explore in Sydney 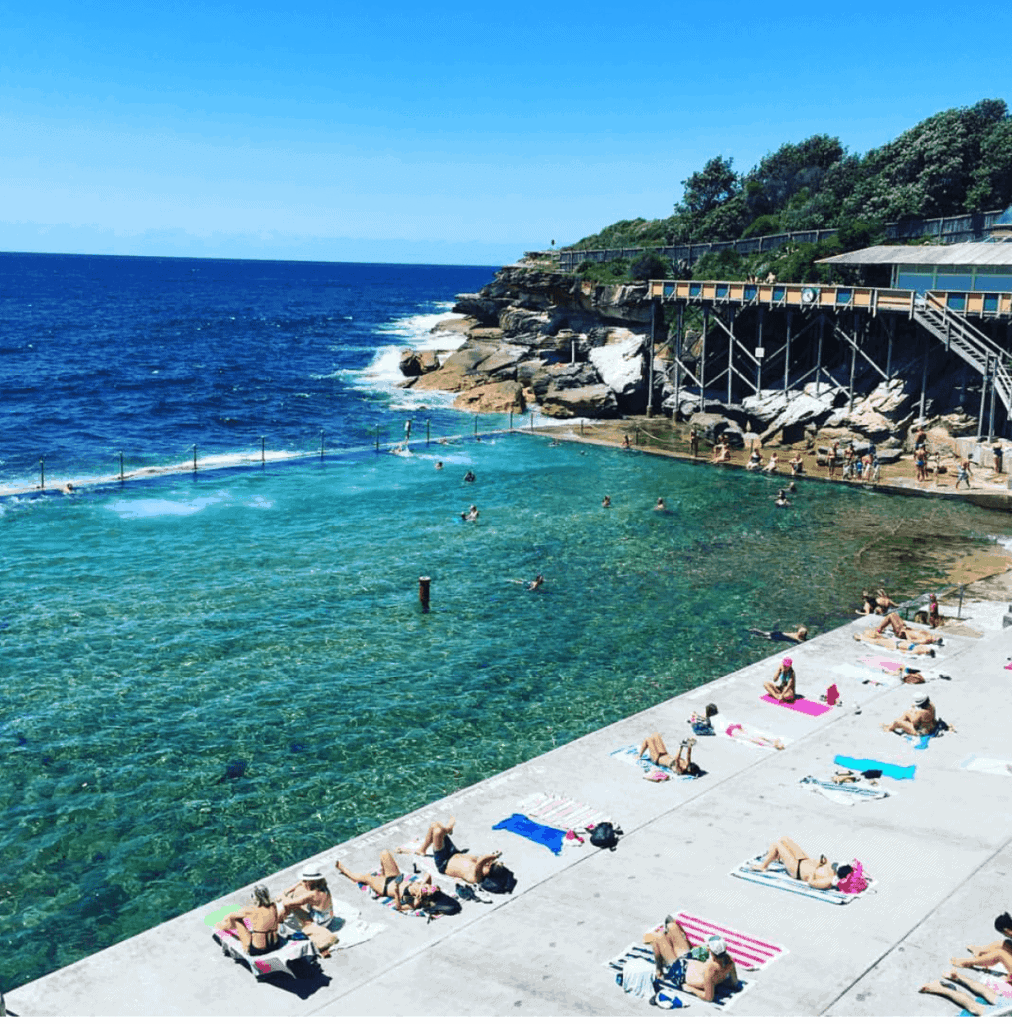 There are many steps to climb down to get to the pool, but once there you might stay all day. Wylies Baths is a large rock pool, with spacious desks for lounging and a café.  There’s a small fee to enter around $5 but it’s totally worth it.  The pool can get a bit wavy so it’s best for older kids on those days. A lovely place to play, spot fish and explore away from busy Coogee Beach. 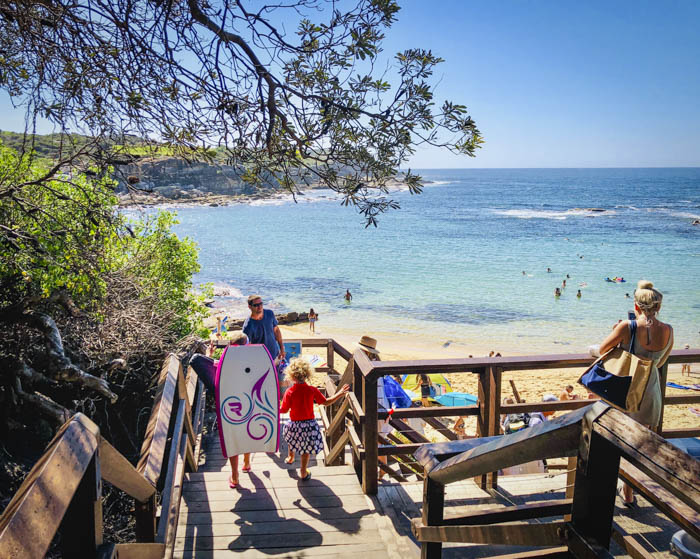 The colour of the water at this beautiful sheltered beach is exquisite, you will think you’re in the Mediterranean which is no surprise why it makes it onto our list as one of the best family beaches in Sydney.  There are rock pools to explore here and a feeling of being a million miles from anywhere.  This is an ocean beach but tends not to have any surf at all. Little Bay is a lovely place to spend a day picnicking.

Related post: 10 brunch cafes you have to visit in Sydney 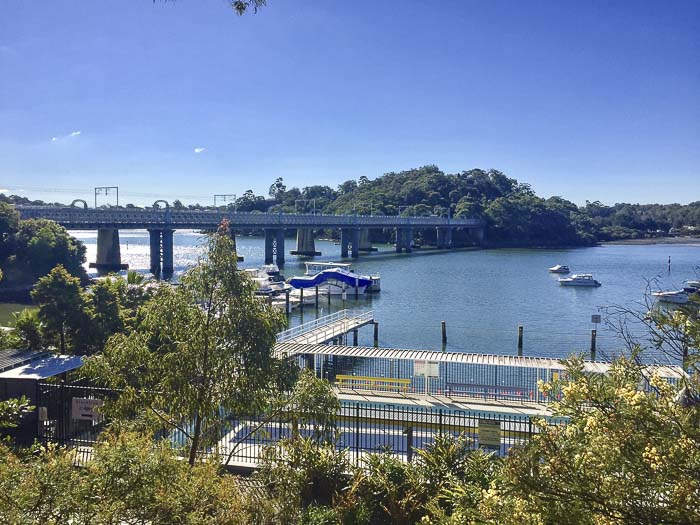 On the banks of the Georges River there’s a netted baths area plus a swimming pool perched above. Both are free to use and are part of Como Pleasure Grounds. You’ll find a handy playground here, a café too and nice walks and bike or trike paths too. 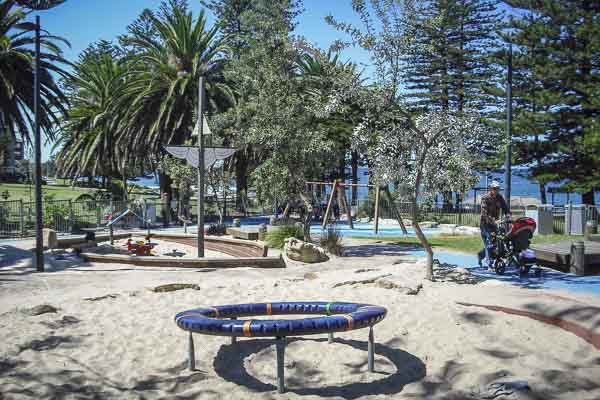 Tucked south of Cronulla is a tiny beach with a cool rock pool which is one of the best family beaches in Sydney. Shelly Beach is a local hero because its more sheltered and also for its swathe of green grass and large thrilling playground.  This is a great place to picnic in the shade of the huge trees whilst the kids play.

Have you read these other swimming blogs yet? 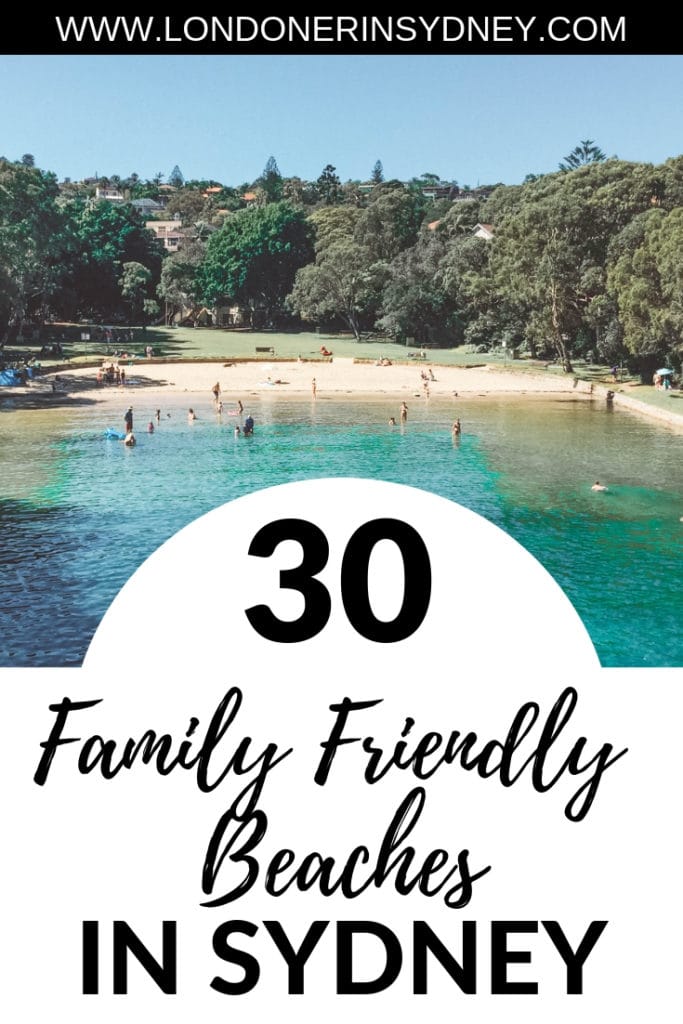