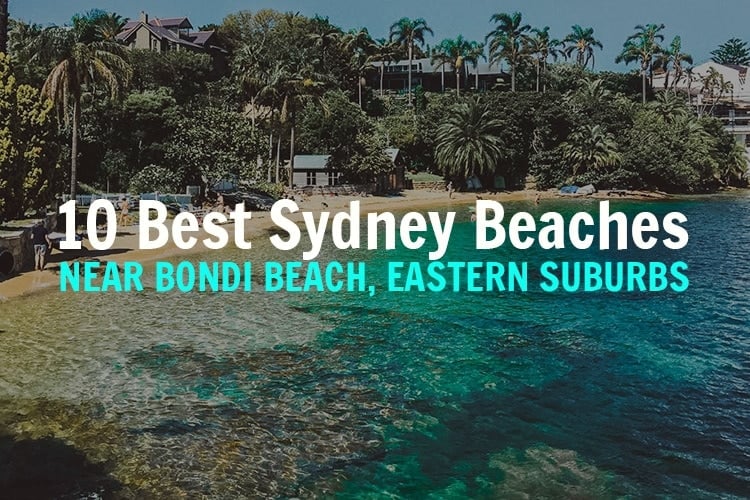 Are you looking to discover some of the best Sydney beaches near Bondi Beach? If you’re trying to find a few quiet beaches in Sydney where the crowds can be virtually non existent and you don’t need to spend all day trying to find a park? Sounds too good to be true right?!

We’ve visited all of the beaches mentioned in this post on a super hot day in Sydney right in the middle of Summer. The results we found on how busy these beaches were in comparison to Bondi Beach were absolutely mind-blowing.

Read on to see if your favourite beach in Sydney made the cut.

One of our favourite places to swim near Bondi Beach is the Ivor Rowe Rockpool located in South Coogee. Parking is easy to find and FREE all day as this gem of a find sits at the end of a residential street.

It’s a small rock pool, big enough to do a bit of light swimming as it’s deeper than you think, but don’t expect the world from it (Steve calls it a puddle!).

But to us, this is the most magical spot in the Eastern Suburbs. Why? I’ve been there a fair few times and on that morning when we went to visit loads of beaches in the area, this was the only spot that wasn’t rammed full of people.

There wasn’t anyone there but us. We couldn’t believe it!

We’re officially calling it, Ivor Rowe Rockpool is the most secluded swimming spot near Bondi!

Was there something wrong with Ivor Rowe Rockpool? We could see Coogee beach in the distance completely packed, but why was no one here? We love the fact you can just sunbath on the rocks with your legs in the pool in the peace and quiet.

If you want to sunbathe with most of your body in the water and have some peace and quiet without a group next to you banging out their music, then this is the spot for you!

Note there’s no toilet facilities or cafes near by so it’s probably not somewhere you’ll want park up for the entire day.

Directions by car: If you’re driving, you can park up on Palmer Street or Bunya Parade.

Parsley Bay is the perfect place to swim with a floatie near Bondi Beach. Again, this is a beach you can find parking easily for FREE, and it’s a relatively quiet beach.

The sand itself isn’t anything to write home about but what we really love is the setting of this beach. There’s a gorgeous bridge that runs over the top which is beautiful, and a great spot for families as the water is flat and shallow.

A lot of people sit at the end of the dock sunbathing and it’s a great spot for swimming. The best bit is, it’s a floatie heaven and we went prepared with our big inflatable. We even had a lot of people looking at us green with envy!

Directions by car: You can park up on The Crescent road where you’ll see the path going down to the beach.

Kutti Beach is known as one of Sydney’s best secret beaches. There’s a small entrance to locate but when you find this beach, you’ll feel like you’ve really found a secret gem. It’s actually right around the corner from Parsley Bay. Just make sure you get here early as it’s not a big beach at all.

We love Kutti Beach and we think you’ll find it to be one of the best Sydney beaches near Bondi Beach too!

Directions by car: Park on The Crescent or Wharf Road, then walk right to the end of Wharf Road and at the very end you’ll see a white gate on the left. This is the entrance to the beach.

How to get to Kutti Beach by public transport: Catch the direct 324 bus from Town Hall which will take 40 minutes.

Wylie’s Baths is a great alternative from busy Coogee Beach. You’ll need to pay $5 to get in but it’s completely worth it. There’s toilets, and a cafe there so this spot is perfect for all. My friend had a massage there as well and said it was the best massage she had ever had!

Directions by car: If you’re driving, park up on Neptune Street or one of the side streets a bit further back for free parking.

How to get to Wylies Baths by public transport: Take the M50 bus to Coogee Beach, then when facing the beach, walk to the far right of the beach and keep walking up the hill right along the beach until you see the sign for Wylie’s Baths.

We’ve tried to go to Shark Beach a few times before but could never find parking. This is far from a secluded beach but I’m adding this one onto the list because it’s a really good family beach to take your kids to.

It’s located in Nielsen Park which is a beautiful big park with lots of space for the kids to run around in. There also looks to be a gorgeous date night restaurant in Sydney called The Nielsen, right on the beach as well.

When we went to Shark Bay on that hot day at around 10am, we actually had to illegally park as we couldn’t find parking. The beach was completely packed that morning (see photo above I took at 10am above).

Directions by car: Greycliff Avenue is the closest spot to park, but whether you find a park that close might be another story!

How to get to Shark Bay by public transport: Take the 324 bus from Town Hall which takes about 40 minutes otherwise Greycliff Avenue is the closest spot to park, but whether you find a park that close might be another story!

There’s something really nice about the area around Watsons Bay. I’m not sure if the ferry ride over from Circular Quay makes you feel like you’re on holiday but it’s a lovely area.

NUDISTS: And if you like a nudist beach, then Lady Bay Beach is just around the corner from Camp Cove which is stunning!

Directions by car: The closest street to park near Camp Cove is Victoria Street.

How to get to Camp Cove by public transport: Take the ferry from Circular Quay or the 324 bus which both take 50 minutes in total to get there.

Gordons Bay is hardly a well kept secret but it has this kind of castaway island feel to it. Located on the Bondi to Coogee coastal path, it’s well known for being an amazing snorkelling beach in Sydney. We say beach, but there’s actually not much of it so you’ll have to park yourself up on the rocks.

Gordons Bay is an awesome getaway from Coogee Beach as it’s just around the corner from it.

Directions by car: If you’re driving then Battery Street, Melrose Parade or Beach Street might be ideal spots to park in.

How to get to Gordons Bay by public transport: There’s no access to cars or transport other than by foot to get here on the Bondi to Coogee Coastal Walk. The quickest way is to get the 339 bus from Town Hall to Clovelly, then it’s a 10 minute walk along the coastal walk.

We’re always drawn to Mahon Pool in Maroubra, an awesome hidden ocean pool that’s absolutely gorgeous. You’ll feel like you’ve hit the jackpot with this one!

Mahon Pool  is more of a busier ocean pool but totally worth it.  There’s the Pool Cafe at the top of the street as well as public toilets.

Directions by car: If you’re driving, park up on The Corso, then when you see the Pool Cafe at the bottom of the hill, the entrance is directly over the road by the public toilets.

How to get to Mahon Pool by public transport: Take the 377 bus from Town Hall which takes 35 minutes to Marine Parade, then it’s just 2 minute walk down to the pool.

And if we had to choose one busy beach near Bondi Beach it would be Bronte Beach hands down. There’s something really beautiful about Bronte that we absolutely love.

The fact that there’s not a busy road next to it and has a way more relaxed vibe makes Bronte our go to busy beach. And there’s a great park with BBQs right on the beach as well!

Bronte Baths must be the most beautiful rock pool in the whole of Sydney. We often go to The Bronte Cafe to have an acai bowl and just sit there watching the beautiful beach. We get the sense there’s a more of a local vibe to Bronte unlike than Bondi and Coogee, and if we could live anywhere in Sydney, it would be in Bronte for sure.

Directions by car: You can park on one of the back streets like Evans Street which we think offers 2 hour parking so you’ll need to keep moving your car. But it’s worth it.

How to get to Bronte by public transport: The 440 bus will get you to Bronte Beach in 35 minutes.

This is literally all the sand you’ll see at Milk Beach.

We heard so much hype about how Milk Beach is one of THE best secret Sydney beaches near Bondi Beach. When we got there, all we could think of was; is this it?

Although there might not be much of an actual beach at Milk Beach in Sydney, we loved that you have to walk through the beautiful gardens at Strickland House to even find this little secret beach. The view out onto Sydney Harbour is beautiful and it’s a great place to take tourists.

There’s also a beautiful walking path known as the Hermitage Foreshore Walk which will take you up to Shark Beach which runs alongside Milk Beach.

How to get to Milk Beach by public transport: Take the 324 bus to New South Road, then it’s a 13 minute walk to Strickland House.

Other secret beaches in Sydney to consider

Little Bay is known as one of THE best secret beaches in Sydney, but it definitely wasn’t a quiet beach in Sydney when we visited.

We picked up a weird vibe in the area as there’s an old hospital complex located at the top of the beach but probably most wouldn’t even notice this.

We did a bit of a hike around this part of the Eastern Suburbs and made it to Little Congwong (a nudist beach).

You see, there’s Annie again thinking I bet there’s won’t actually be any nudists there, but how wrong was she (needless to say we didn’t stay very long)! It’s not the most beautiful nudist beach we’ve seen in Sydney and it was pretty crowded at the time of visiting.

Literally just around the corner from Little Congwong lies Congwong beach. We’ve read in many posts that this is again THE best secret beach in Sydney but to the beach was packed so maybe we just visited at the busiest time of the day.

It was however nice to see the famous wharf that was used in the Mission Impossible 3 movie!

What’s your favourite Sydney beaches near Bondi Beach are? Let us know in the comments below.

Read more from us.

Need an airbnb in Sydney?

Pin below to save for later.