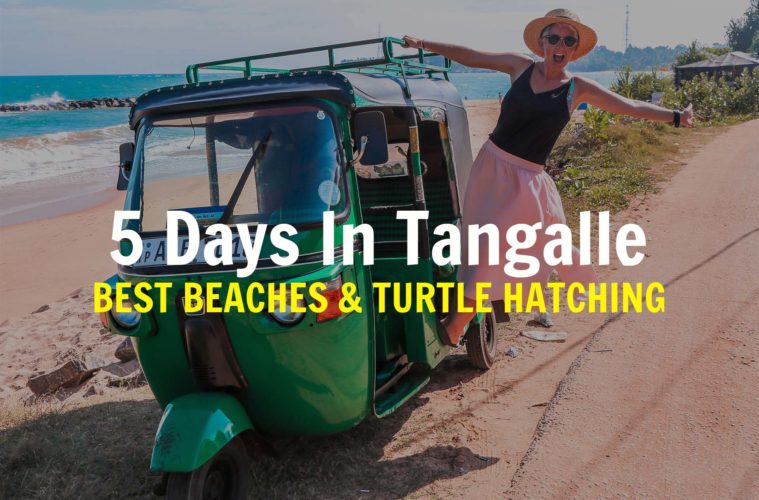 Why you should visit Tangalle Sri Lanka

After a good 10 days travelling non stop around Sri Lanka, we were exhausted. The beach had our names written all over it so we made a beeline from Ella down to the beach town of Tangalle (pronounced Tangalla). We decided on Tangalle because we heard it was a quieter beach in comparison to Mirissa and more chilled out. It also made sense directionally to start there, then head across to the other beaches on our way back to Colombo.

How to get to Tangalle from Ella 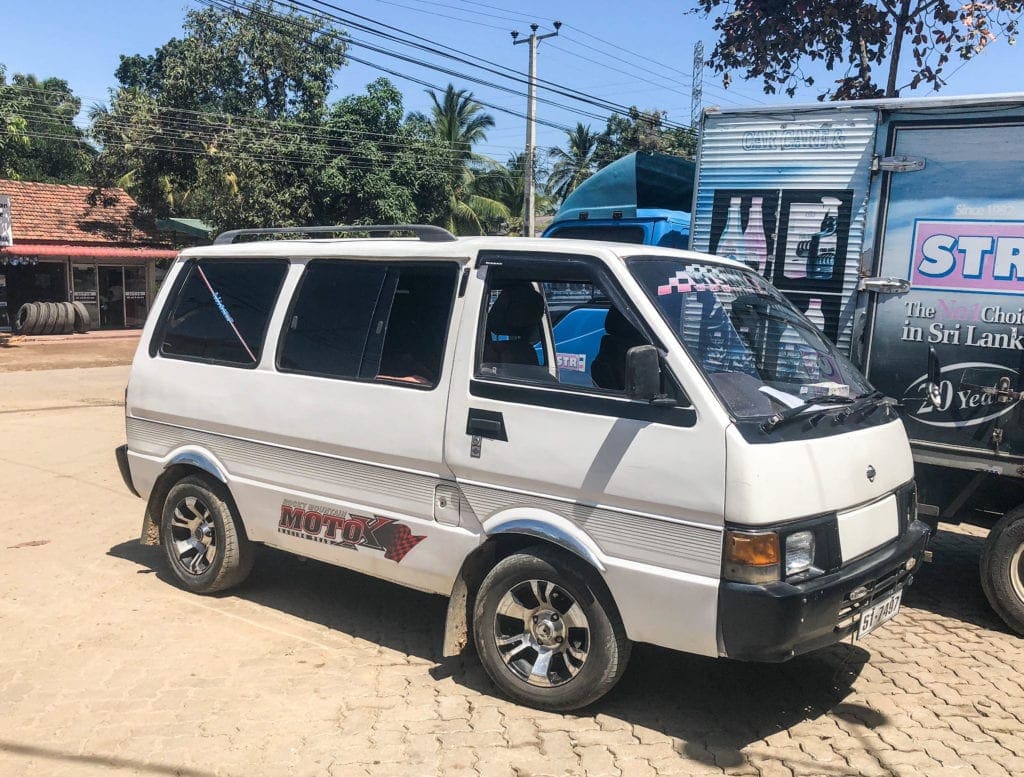 There’s a direct bus from Ella to Tangalle which takes about 4 hours but after our horrendous train journey to Ella, we decided to splash out and we paid 9,500R (about AU$80) for a private car to drive us 3.5 hours to the beach. I’m glad we just paid it because we were exhausted and I couldn’t even imagine standing for another 4 hours again.

When we got to Tangalle, the temperature had risen considerably and it was super hot!

Where did we stay in Tangalle? 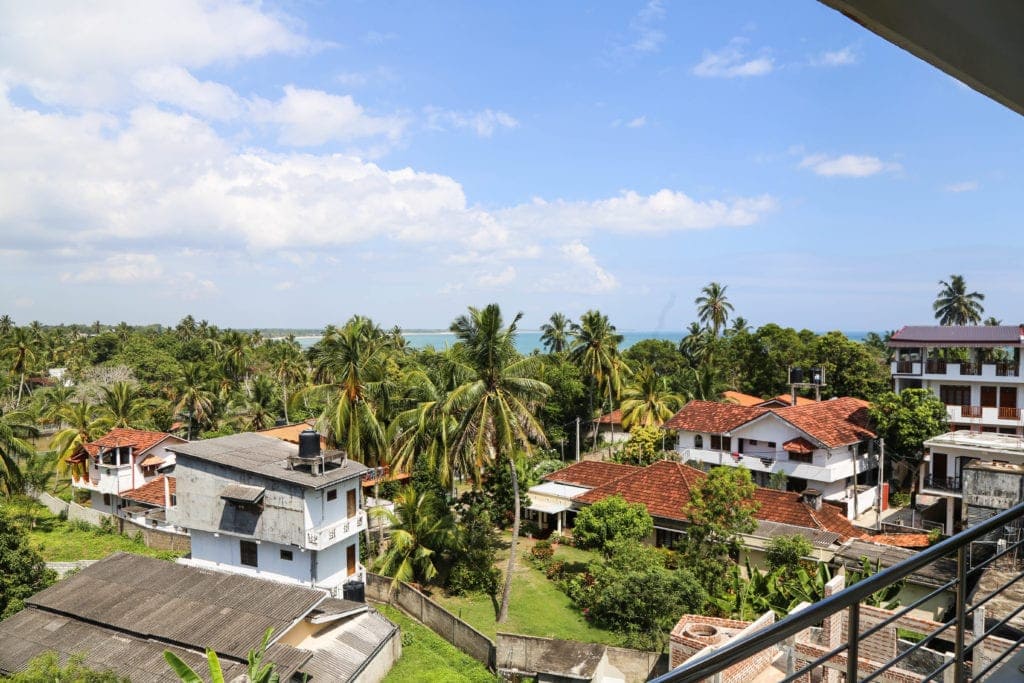 The view from our balcony at The Mars Hotel, Tangalle

We stayed at The Mars Hotel, an upper end hotel right in the middle of the small city off the main road and in a quiet area, where rooms start from AU$40 a night. The location was fab, and perfect to nip out for a cheap bite to eat or to catch a tuk tuk to the beach. 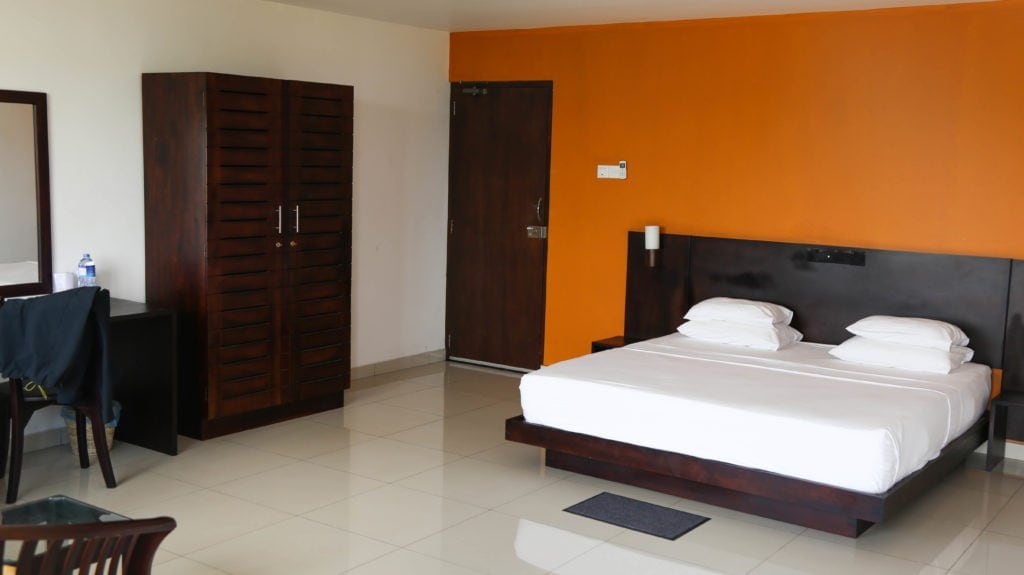 The hotel staff were lovely and when we were greeted by them, we were also greeted to the most beautiful view of the beach. It felt great to be back by the beach again! 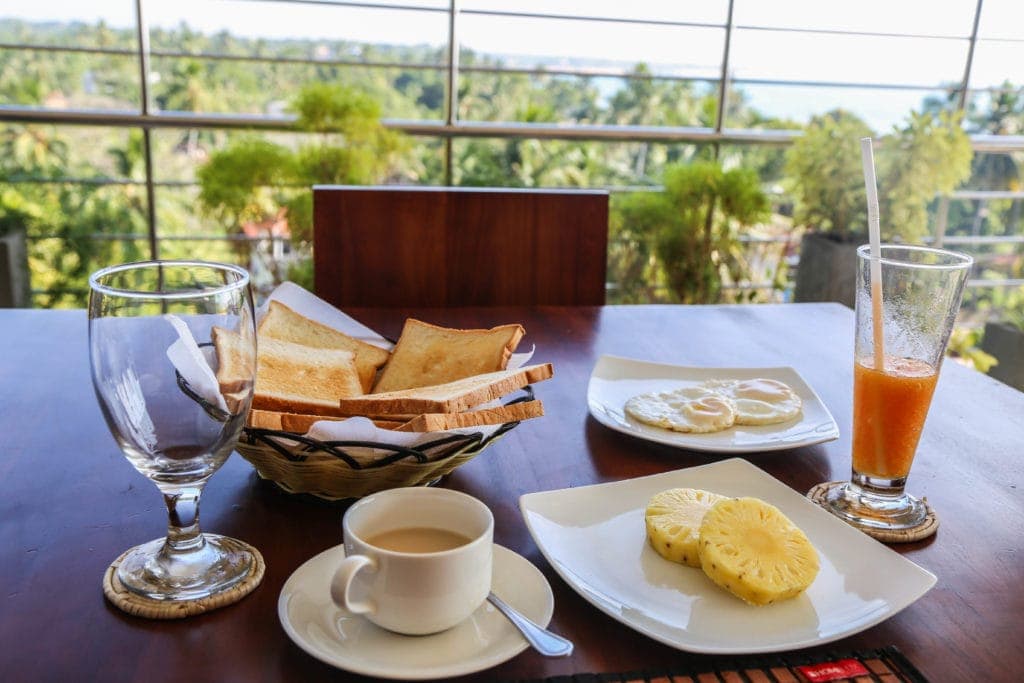 Our room was big and spacious with the best shower I experienced in the whole of Sri Lanka with hot water too!! We also had a balcony to really enjoy the view of the beach.

A lot of tourists stay in the area of Medaketiya which was more of a holiday vibe. More on that later in the post. 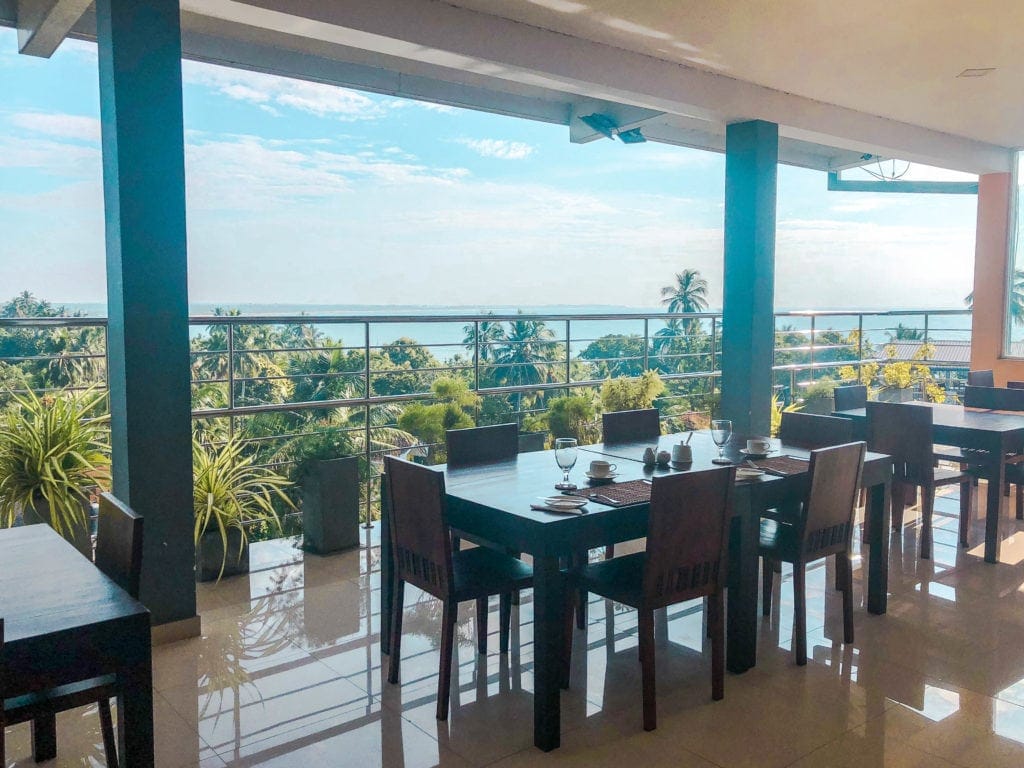 Breakfast views don’t get much better than this!

Best beaches to visit in Tangalle 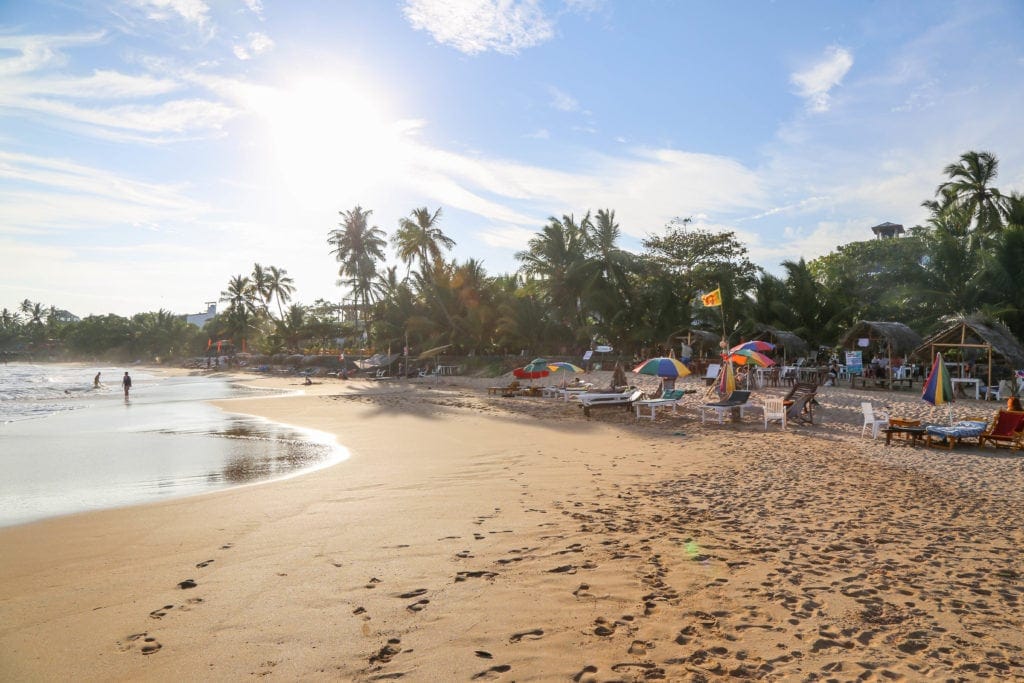 After we checked into our accommodation, we hoped into a tuk tuk and asked them to take us to Goyambokka beach, a beach I heard from many others that was supposed to be beautiful. When we arrived, it had clouded over and we were surprised to see so many people on it. I’m sure it would have looked beautiful if it was sunny. 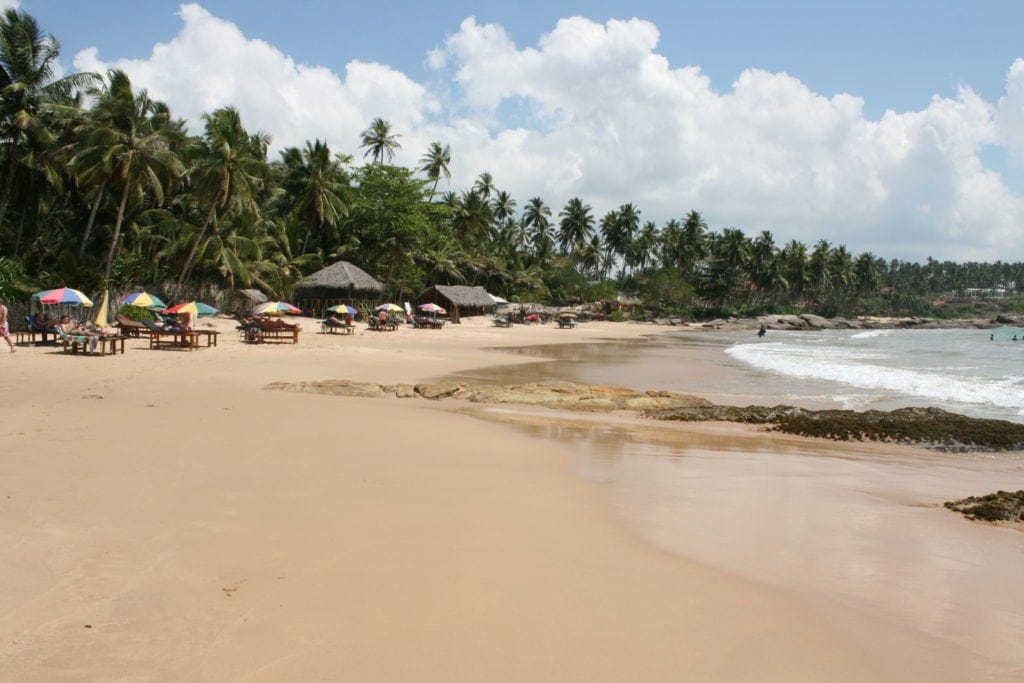 Goyambokka Beach: I found the photo above from John Henderson blog which was taken in 2015. It’s much more busier now with various beach restaurants and more sun loungers.

But, the best beach for us was Silent Beach, a beach located just next door to Goyambokka. We couldn’t believe the difference in the two beaches, as there were hardly anyone on this beach. It was absolutely beautiful, a beach which was what we hoped Sri Lankan beaches would look like with white sand, crystal clear, turquoise waters and palm trees everywhere. It was without a doubt one of my favourite beaches I saw in the whole of Sri Lanka. 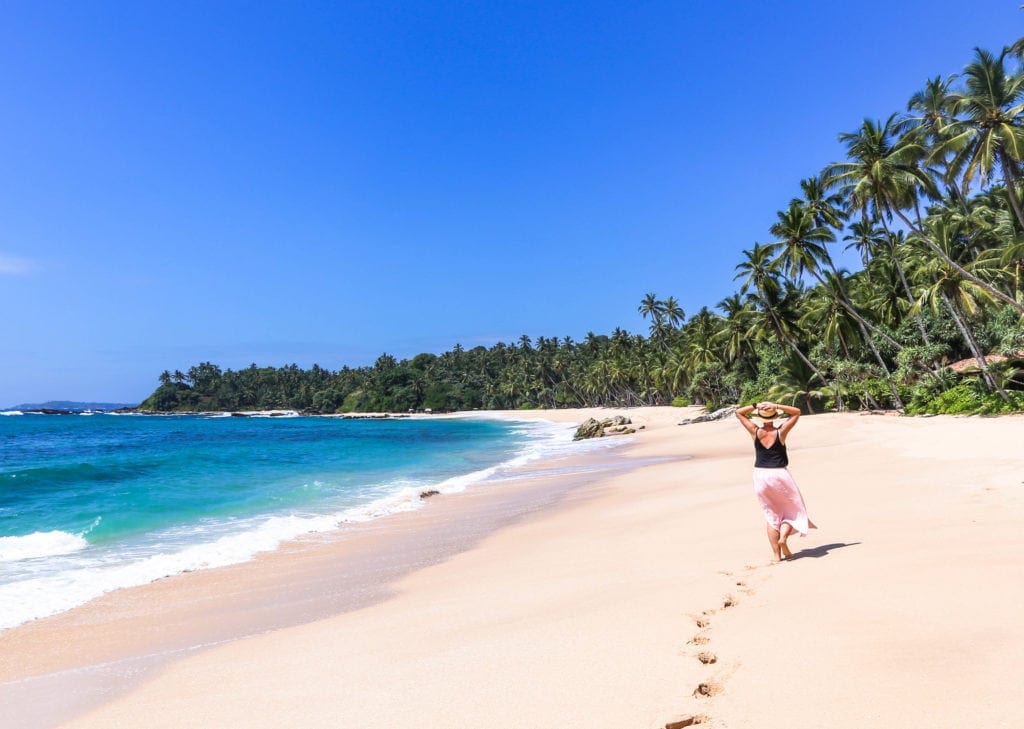 Both Goyambokka and Silent Beach had resorts on them but they were still lovely. 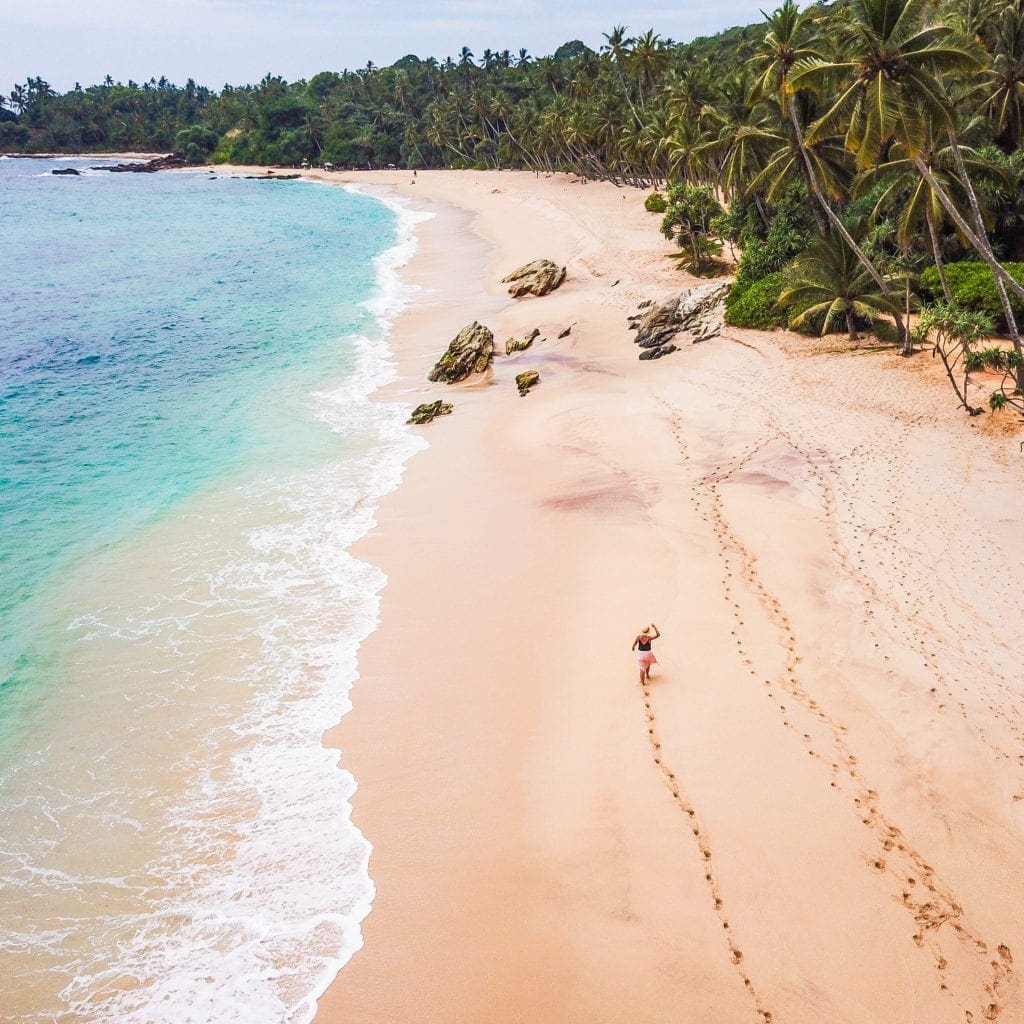 We also went to check out Medaketiya which was where a lot of the holiday makers stay. It was quite fascinating seeing the difference between the small city of Tangalle and once you drive 30 seconds down the road, you come to the holiday street of Medaketiya. It actually had a nice vibe although the restaurants were always dead. The beach wasn’t anything to write home about but would be worth staying if you wanted that ‘I’m staying opposite the beach’ feel. 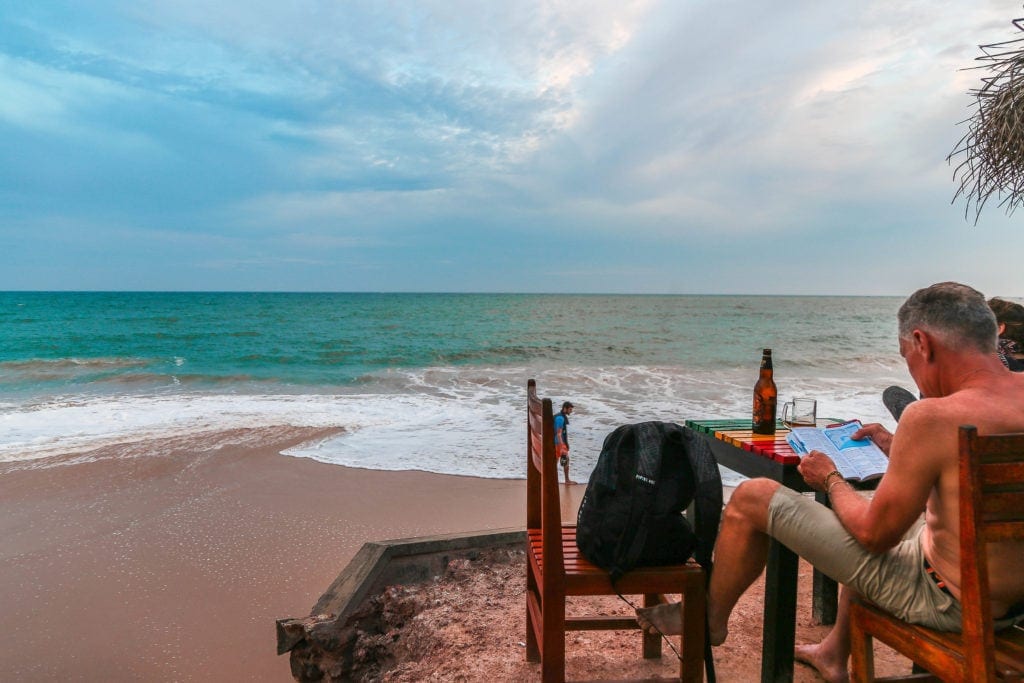 We also decided to stay two nights in Rekawa which was just twenty minutes out of the city, known as the place to see turtles hatch their eggs at night time.It’s a nightly occurrence where turtles come back to where they were born to lay their eggs before leaving their babies to return into the ocean.  It was amazing to stay in the country and get away from the noise of the city for some peace and quiet. The beaches in Rekawa were beautiful and deserted but our time went a bit worse for wear when I stepped onto a sea urchin in a rock pool. Before I knew it, I was in the operating theatre having the spines taken out. 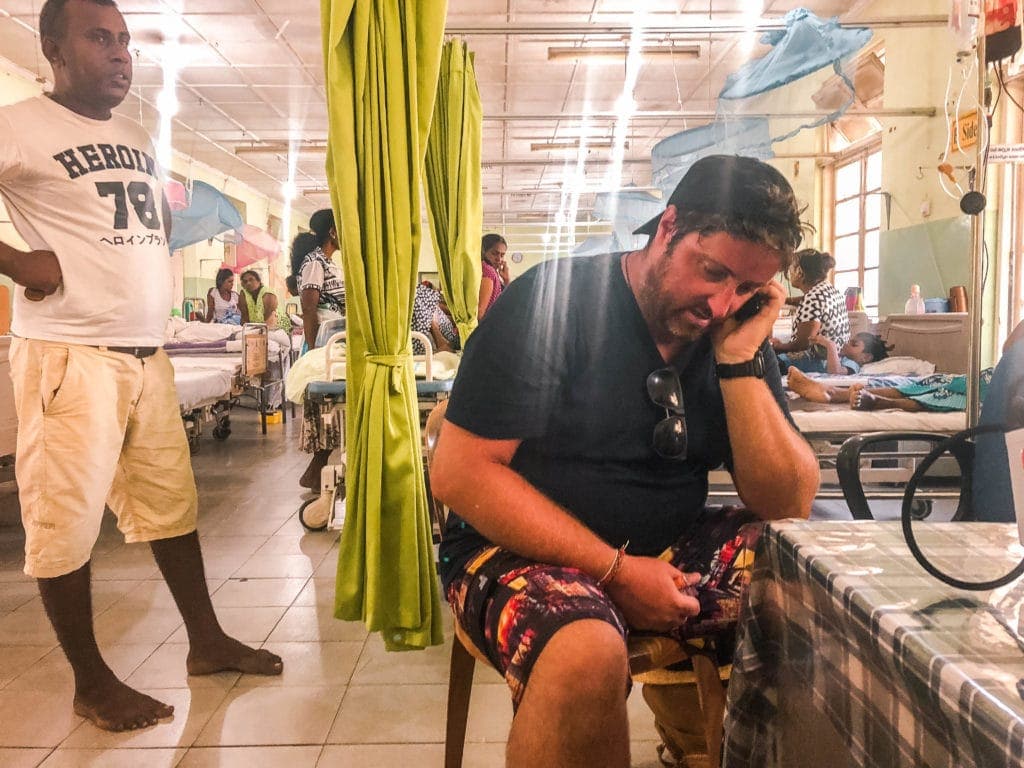 At the hospital waiting for surgery

But, we returned back to Rekawa to finally see a turtle one night laying her eggs. It was a bit of a circus with about 100 others there to see the same thing. We all had to pay 1000R (about AU$8) each to be taken down the beach in the evening. 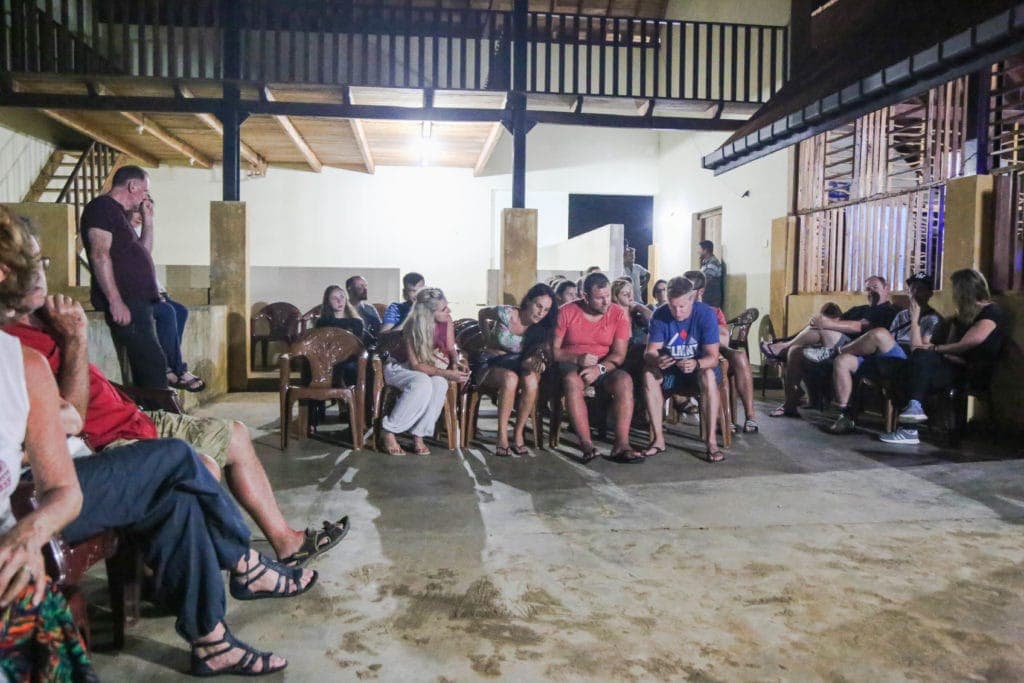 Everyone waiting before the walk to find the turtle.

We only got a few minutes with the turtle and it wasn’t anything to write home about but taking a walk along the beach at night time was nice. 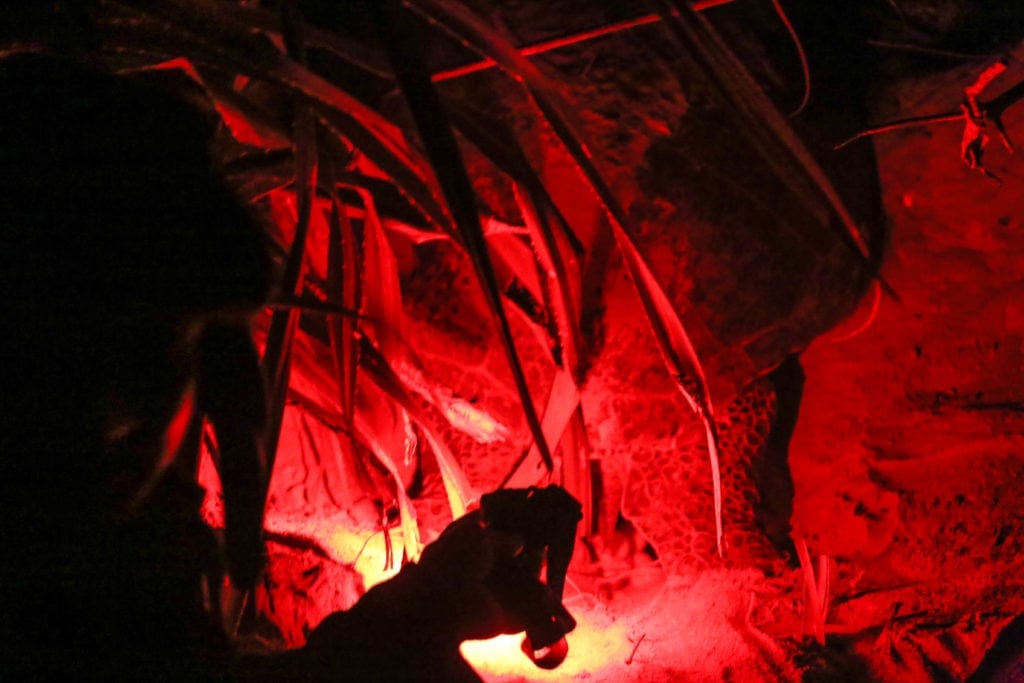 Would I recommend going to Tangalle? 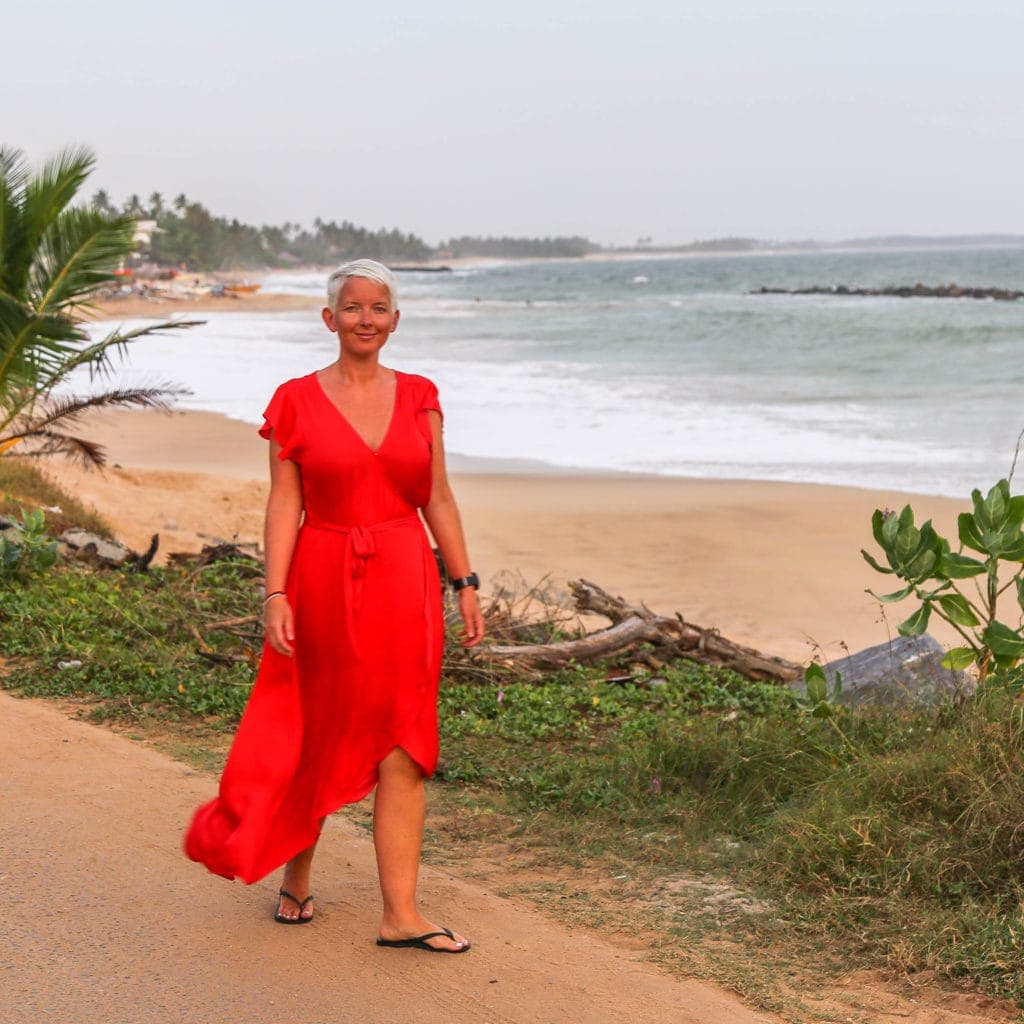 Our experience in Ella Sri Lanka