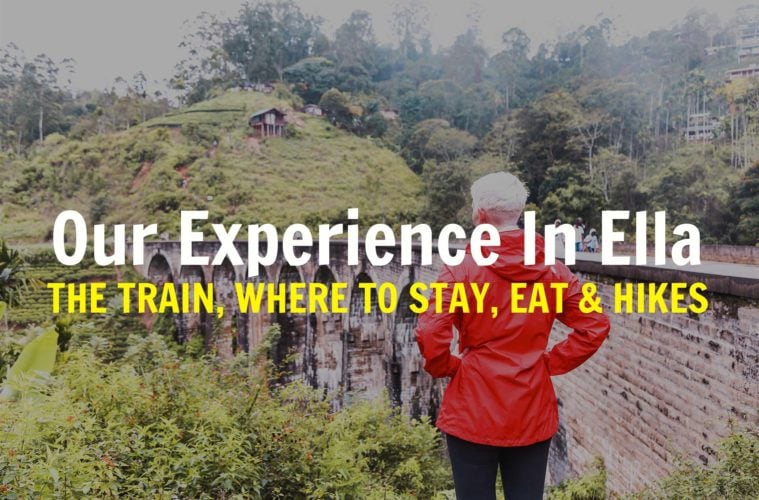 Our experience in Ella Sri Lanka

Whilst we were travelling around Sri Lanka, one of the highlights we were most looking forward to was the train ride from Nuwara Eliya to Ella. It’s known as being the most beautiful train ride in the world, a journey that takes you through countless rolling hills of tea plantation after tea plantation.

But, the reality of going on this train was actually very different and I’ll just point out that we were travelling in Sri Lanka during peak season at the end of Jan/early Feb 2018 which probably made the difference because I hope it’s not like it all the time.

How to get to Ella

To get from Nuwara Eliya to Ella, it should take about 3 hours. Unfortunately for us, it took 5.5 hours that day due to the train engine being changed. But the time wasn’t actually a problem for us, it was the lack of structure on the trains as in once again tickets were being sold without seats and so many tourists were boarding the train that there wasn’t enough space for everyone. I actually felt sorry for the local people trying to get on the train and I thought they must absolutely dread this train now the tourists have really taken over it. Everyone looking like they are having a lovely train ride in Sri Lanka.

But here’s the reality of what it was actually like all squashed in for 5.5 hours. Standing all cramped for over 5 hours, whilst being rained on wasn’t exactly fun. 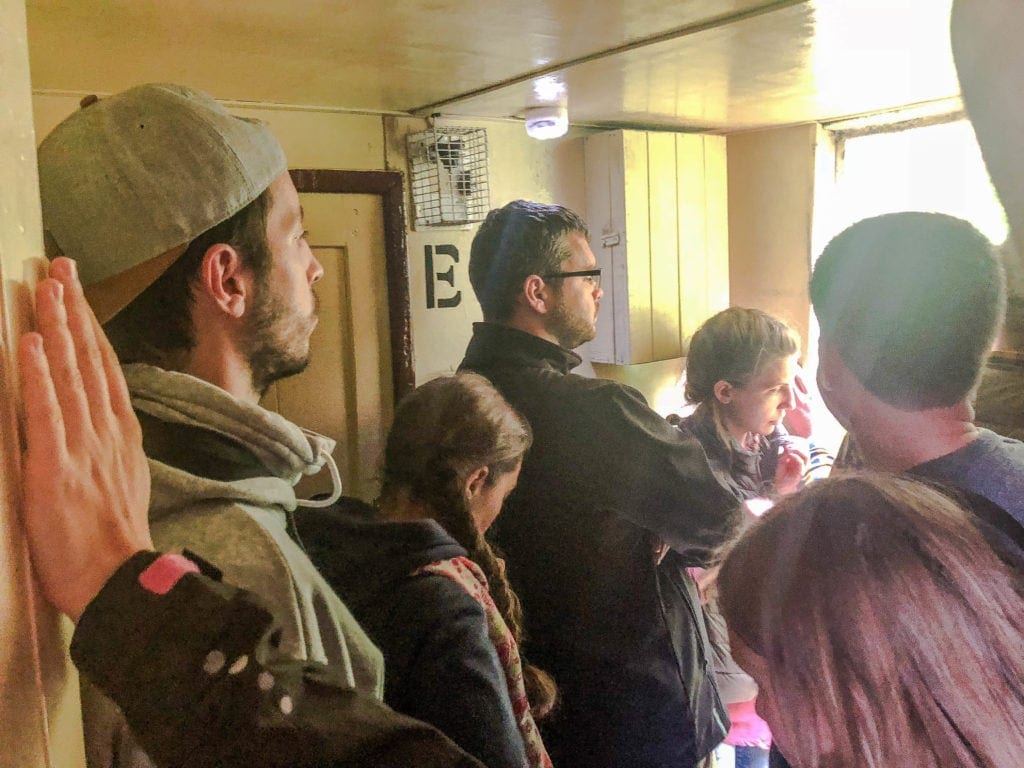 Other tourists not quite expecting the train journey to be like it was.

Luckily we had some chatty tourists on the train with us that made me feel that at least we could help each other through the journey. Because the weather was bad it meant there were no views whatsoever and just fog throughout the entire journey.

We decided that day, it would be the last day we’d take Sri Lankan trains again.

When we got to Ella, there was a sign saying Welcome to the tourist town of Ella and it was spot on, a town purely there for tourism which was actually quite nice because there was some amazing Western restaurants and it was a lovely small and chilled out town, surrounded by the most beautiful landscape. If you’re expecting it to be an authentic Sri Lankan town, it’s not quite like what it probably once was, but we found it a nice break from being hassled by tuk tuk guys and the chaos in other towns. 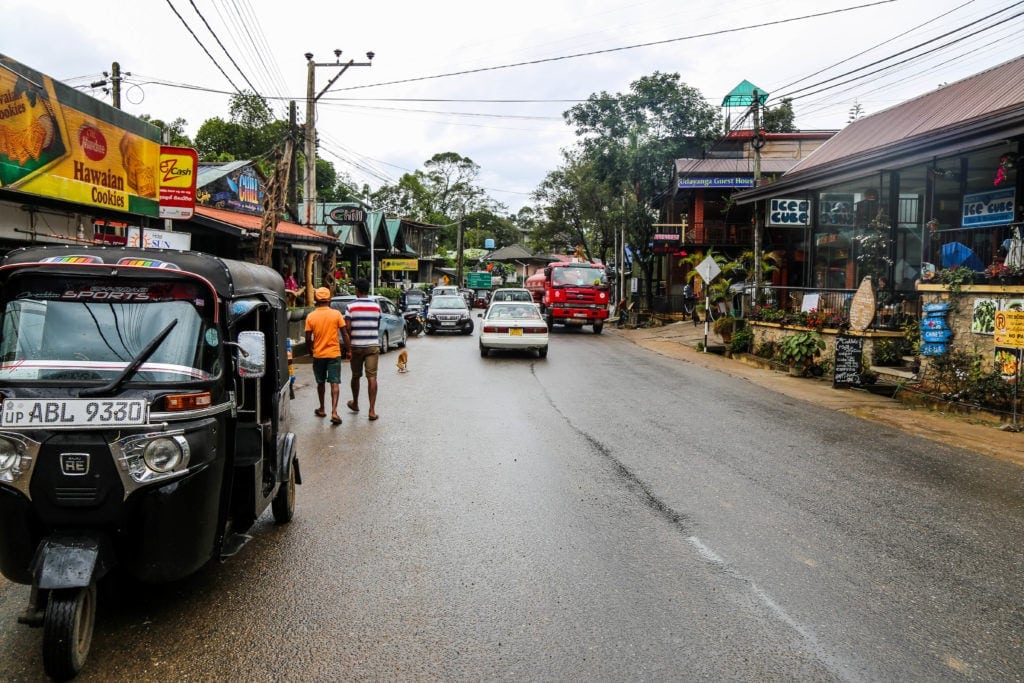 Although it rained in Ella, we still enjoyed it very much.

Where did we stay in Ella? 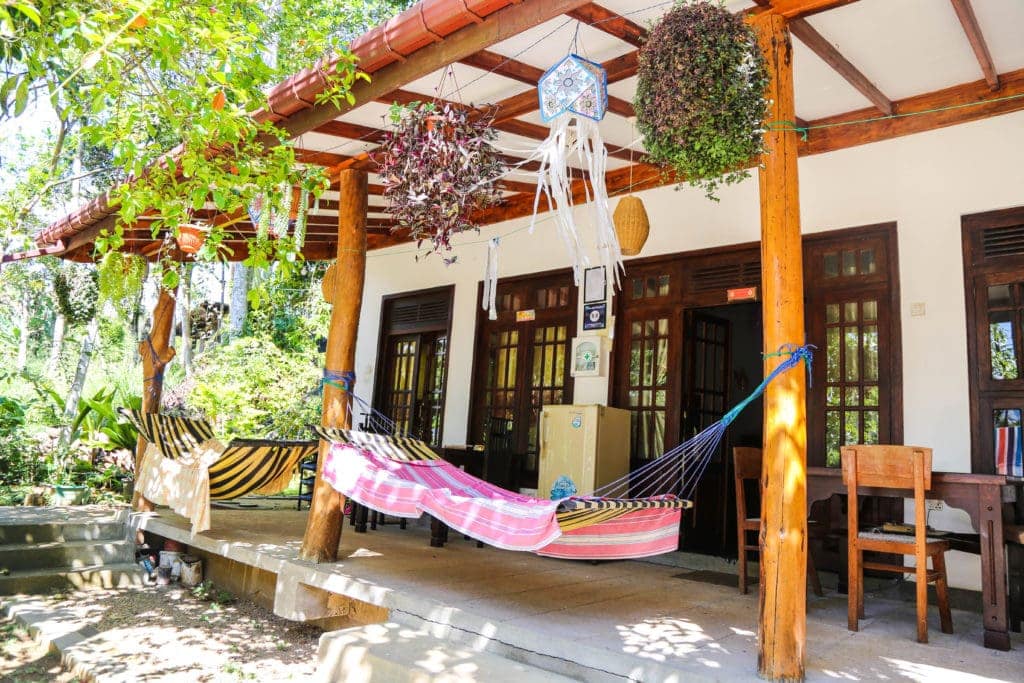 Villa Eden Paradise was a lovely place to stay in Ella

We booked into Villa Eden Paradise, a beautiful and new guesthouse just up the road from the train station which we found on airbnb which cost around AU$50 a night. Make sure you get your $55 off airbnb from me if you haven’t yet (there’s no scam, it’s just purely because I use it all the time that others can reap the benefits from me!) It was also in a good location and just a couple of minutes walk to the centre of town. It was a lovely, quiet guest house and I must say, we had the best breakfast out of anywhere in Sri Lanka at this guesthouse! Some of our massive breakfast at Villa Eden Paradise. There were also pancakes and eggs as well!

When we got there, we were shown to our room complete with aircon, ensuite with hot water and a cool room that had a light display under the bed which I’ve not seen before. 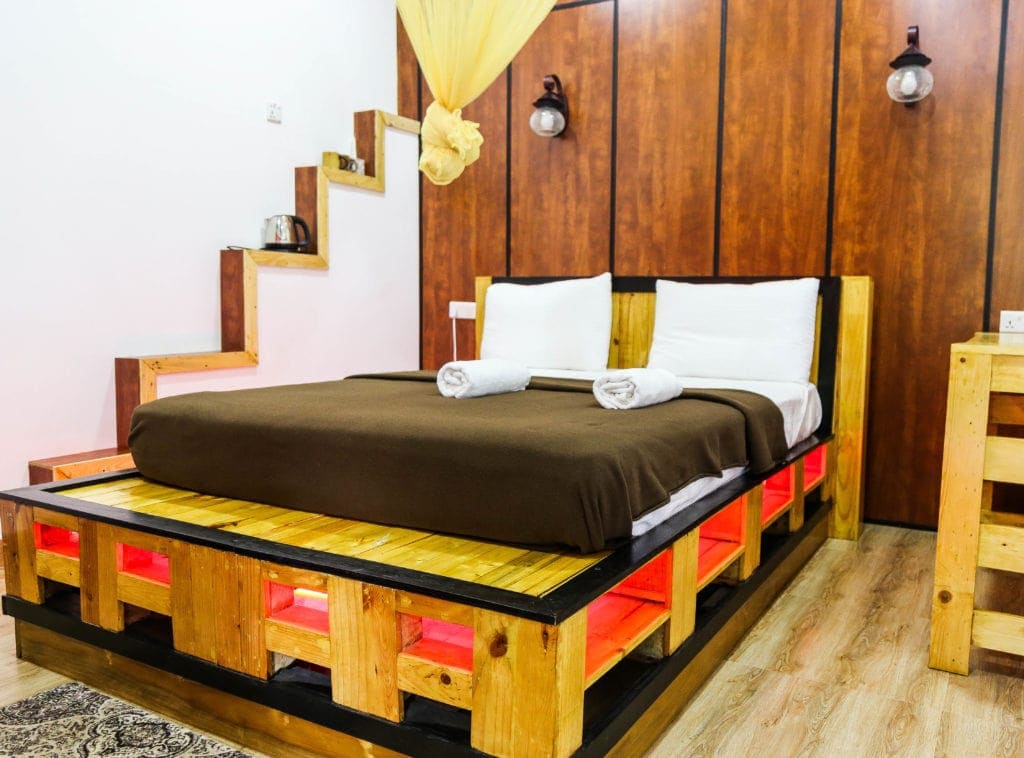 Our room at Villa Eden Paradise.

The local family which ran the hotel were lovely and welcoming and we really enjoyed our stay there. 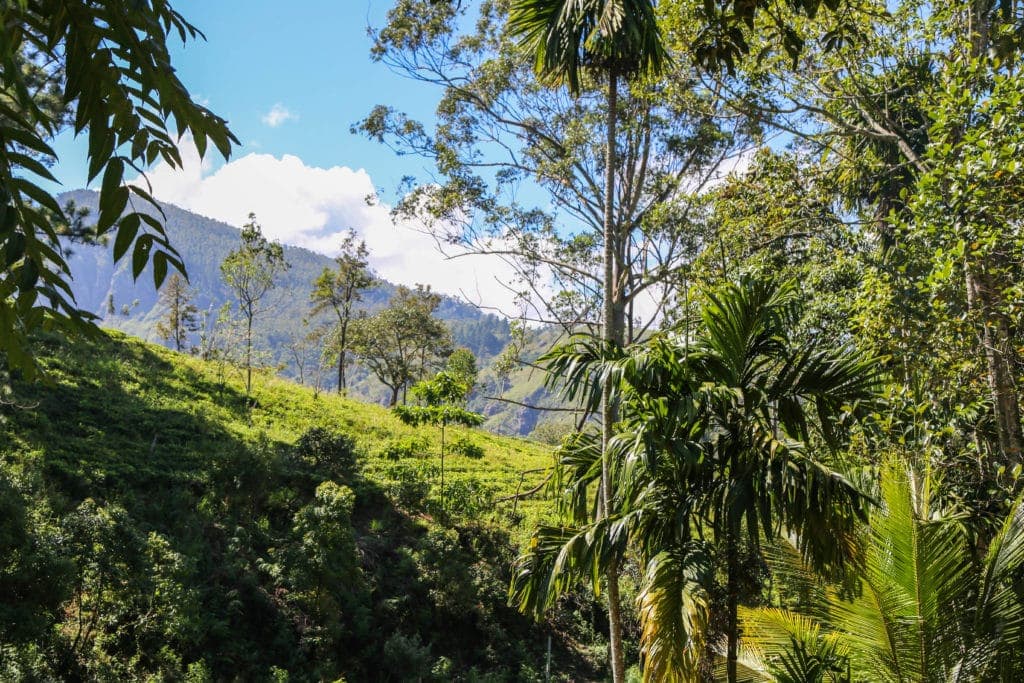 The view outside Villa Eden Paradise was just beautiful!

Where to eat in Ella 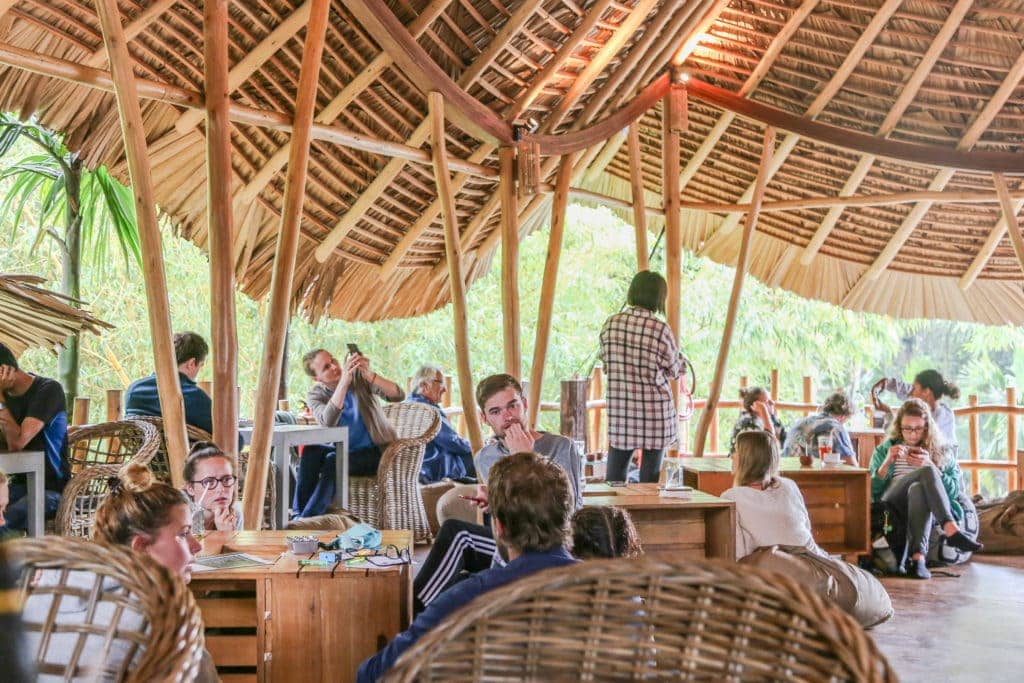 We went straight to Cafe Chill after reading a blog here. Make sure you go right up to the top floor as it’s a gorgeous space that you could literally spend the entire day there. And I suspected many people just did that because there were bean bags set up, even docks to charge up your phone or laptop. This place was definitely somewhere to chill out for the day, especially as it was raining. It was the first Westernised place we’d seen in a long time, so naturally we ordered some very Westernised food such as Fish & Chips and a pizza. The cocktails were also good too 🙂 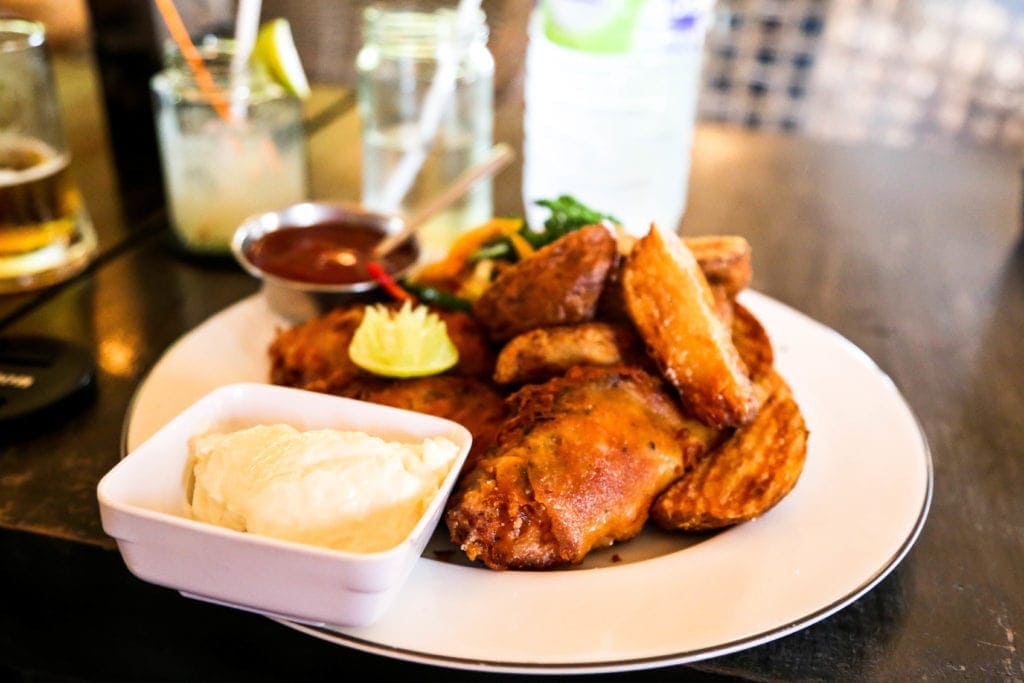 A break from rice & curry as we delved into Western food again.

Because it was raining, we spent most of the day at Cafe Chill before we returned back to our accommodation for the night.

We went to another place for food nearby which had more of a local feel to it. We tend to prefer to eat locally because it’s cheaper and better food than in the tourist places but we were happy to splash out at Cafe Chill for the night.

What to do in Ella

At the top of Little Adam’s Peak

Although the weather wasn’t performing, Ella itself is beautiful. It’s surrounded by loads of hikes and we actually chose to do the Little Adam’s Peak (don’t get it confused with the big daddy, Adam’s Peak) which goes in a bit of a circuit to the Nine Arches Bridge and back into the town. It’s an easy one hour walk to the top of the peak which over looks Ella Rock, a beast of a mountain that can also be climbed in a couple of hours. 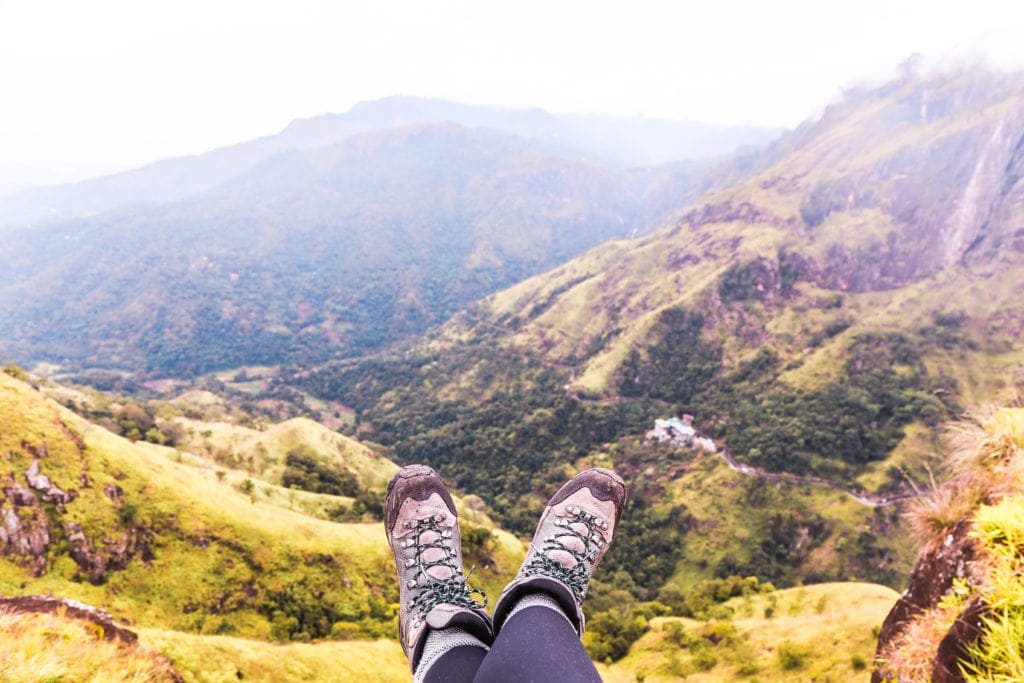 At the top of Little Adam’s Peak

After we got to the top, we continued on along to the famous Nine Arch Bridge a bridge that is still used today for train journeys that took about 20 minutes. 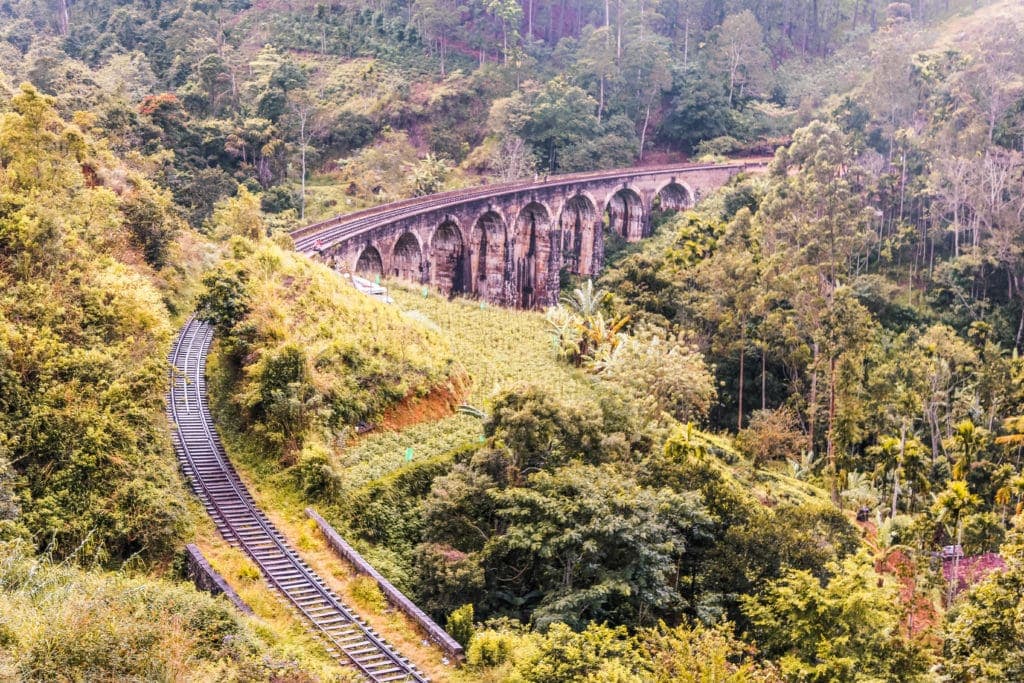 When we got to the bridge, there were more people than I hoped to be there, even as it was raining! We wanted to get our drone out but because the weather wasn’t great, we had to sack that idea off unfortunately. The scenery was stunning and felt like we were in a tropical jungle! 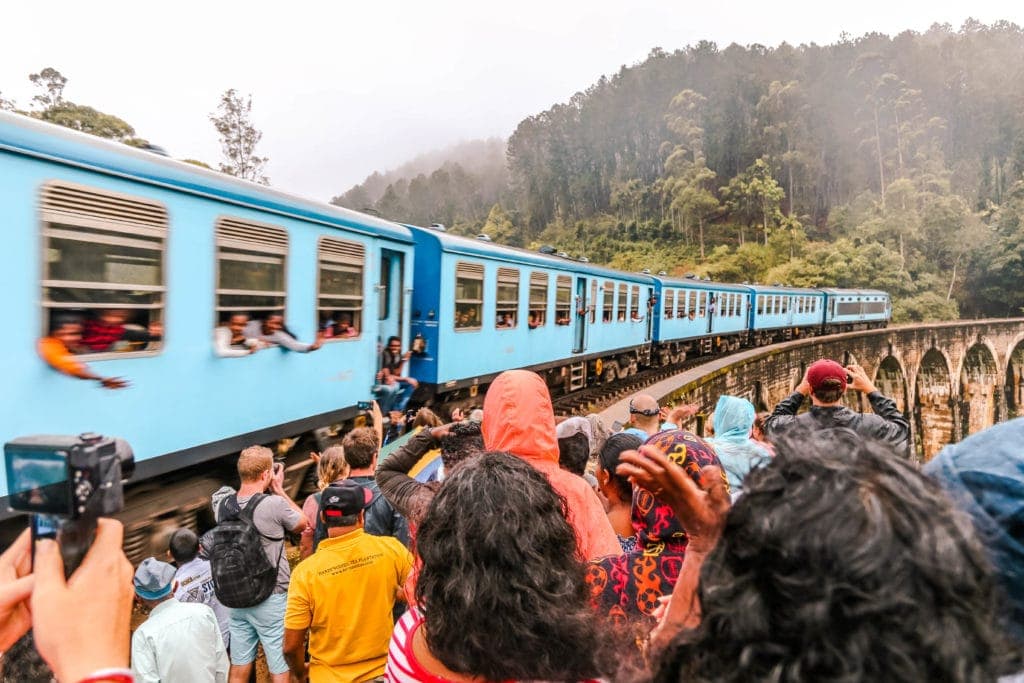 Everyone getting excited about seeing a train!

We managed to time it well as a train was about to pass through, something that many tourists didn’t quite understand that a train could mow them down at any second as they just walked slowly over the bridge. It always baffles me that people seem to think they are invincible when placed in situations like this. But, we got to see the train go right passed us and everyone loved it. 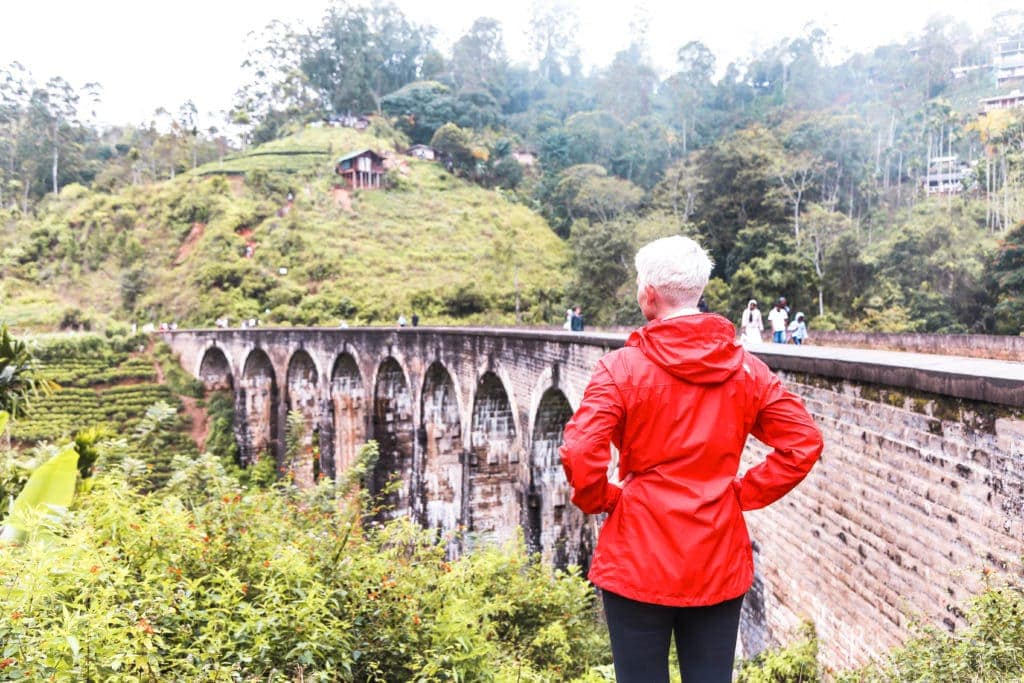 After we walked across the bridge, we jumped into a tuk tuk to take us back to town. You can walk back which is a couple of KMs but seeing as it was raining, we just caved in and spent a hefty 500R on the ride back into town. This also means you can just get a tuk tuk to the bridge as well so you don’t necessarily need to do any hiking.

If you’re going to hike to Little Adam’s Peak and the Nine Arches Bridge, you can do this in trainers. I wouldn’t advise wearing flip flops but trainers would be OK. The tuk tuk guys know exactly where to be to make some money at Nine Arches Bridge!

And as we woke up the next morning, the sun was typically shining as we checked out of our guest house and boarded into a private car to take us to our next destination – the beach!

I really liked Ella a lot for the guest house we stayed in and their friendly, welcoming nature but also because the town was the first chilled out and quiet town we had visited in Sri Lanka and not forgetting, it was a beautiful town as well.