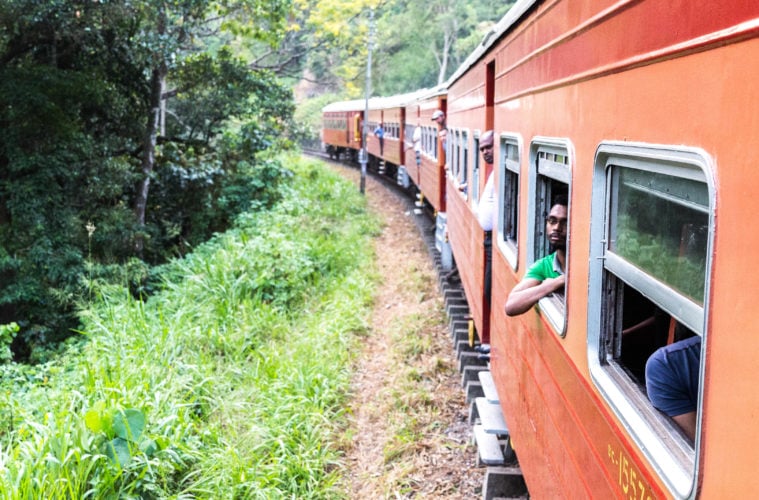 After three days in Kandy, we decided to head up to Dambulla for two nights to specifically see the famous Sigiriya rock and the incredible Dambulla Temple Caves.

How to get to Dambulla from Kandy 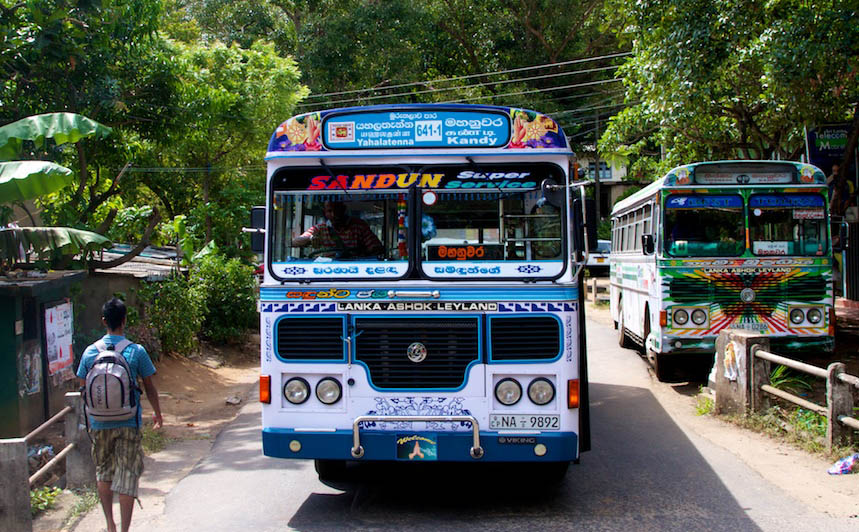 There’s only buses to Dambulla

The only way to get to Dambulla from Kandy is on a local bus (unless you have a driver or pay for a taxi). You just need to go to The Good Shed bus station behind the railway station and once there, you’ll have a thousand touts all over you like a rash trying to get you on their bus. There are different types of buses like an express bus which has aircon and costs 380R each. It takes 1.5 hours and the buses go like every ten minutes or so. We just jumped on the local bus and paid 110R. We didn’t need aircon because there was a good breeze coming through the bus anyway and it was actually more fun. The journey took just 2 hours to get there.

Now getting off the bus was a bit chaotic. The bus driver stopped for half a second, got our backpacks out of the bottom of the bus and we were left with buses flying towards us, left, right and centre. So, once again the tuk tuk drivers swarmed us and we finally agreed on a price and headed up to our accommodation.

Where did we stay in Dambulla? 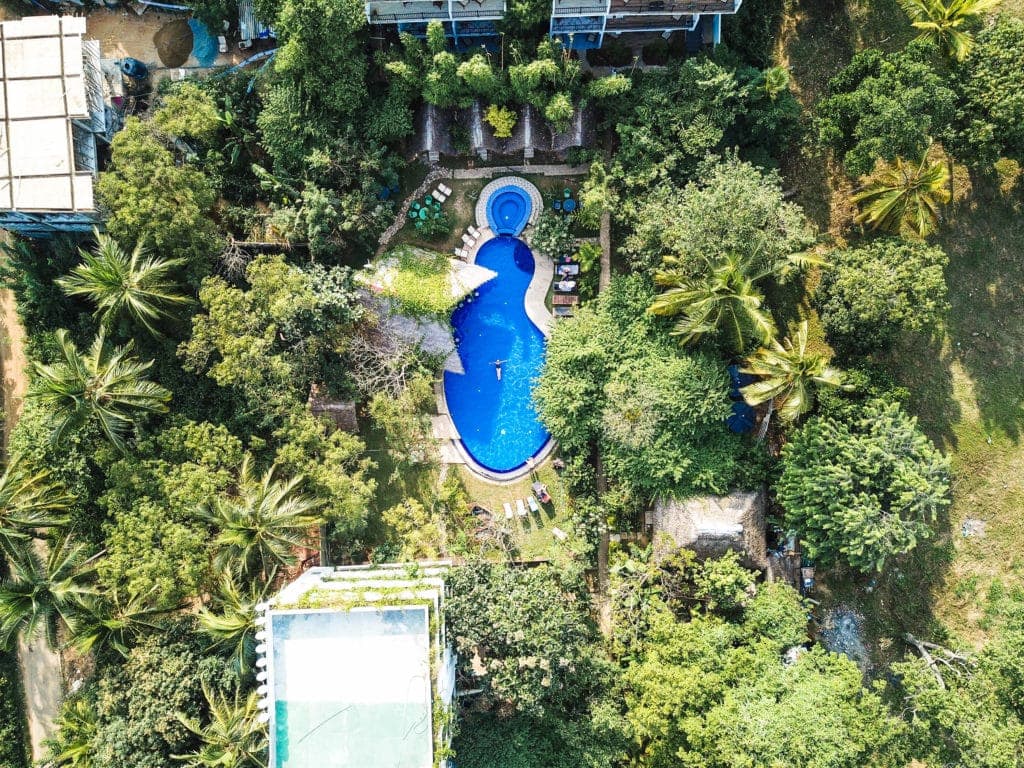 Getting the pool to myself at Sundaras Resort & Spa

We stayed at the Sundaras Resort & Spa and I’m glad we did because it was like a little jungle paradise once again in a hectic town. As we walked through the gates, we were surrounded by lots of trees and a warm welcome from the receptionist. Once we were taken through to the resort, we saw a massage parlour, a huge pool and a pool bar. It was huge relief knowing that we had just found a slice of heaven after our chaotic time in Sri Lanka so far. Guests ranged from families, young couples, older couples, pretty much everyone! 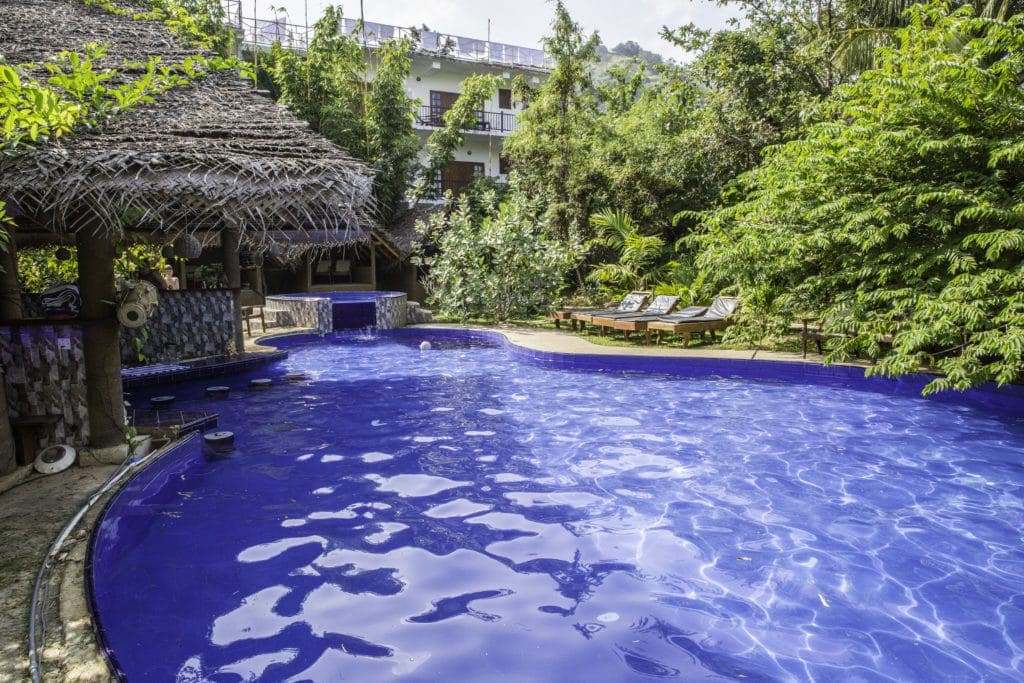 When we were taken up to our room, it was big, modern and clean and it was the perfect place to stay for the next two nights. 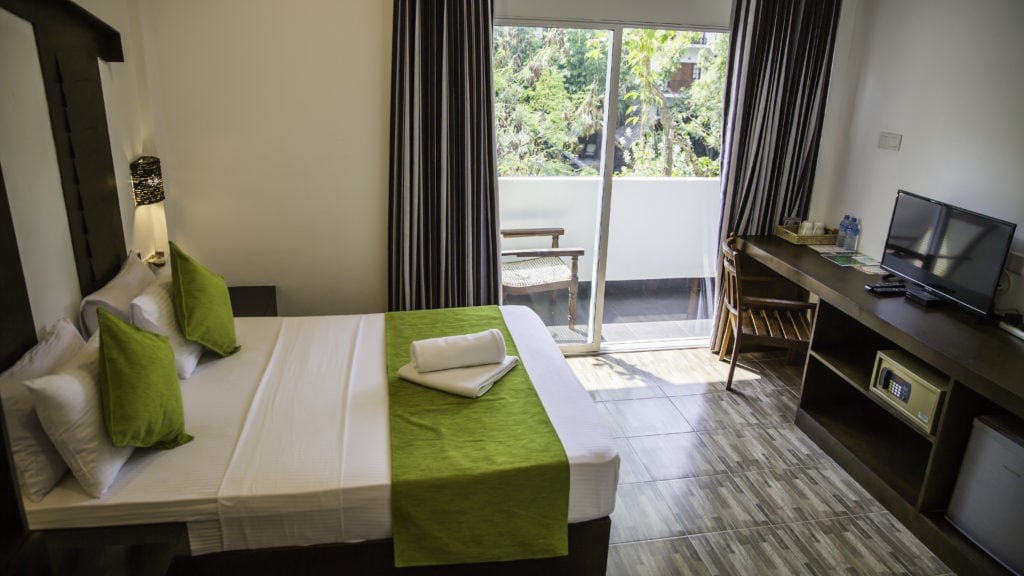 Our room at Sundaras Resort & Spa

They had a fair few young travellers working there on internships, a partnership owner Damian had set up with various universities around the world. I thought it was a nice idea for the students to learn a few skills about hotel management before finishing uni. But, he doesn’t only help students in Western countries but also the local people, offering them their first job before they go onto bigger things. It was quite remarkable and it made me feel good that we weren’t staying somewhere generic but somewhere that was actually helping the local people. 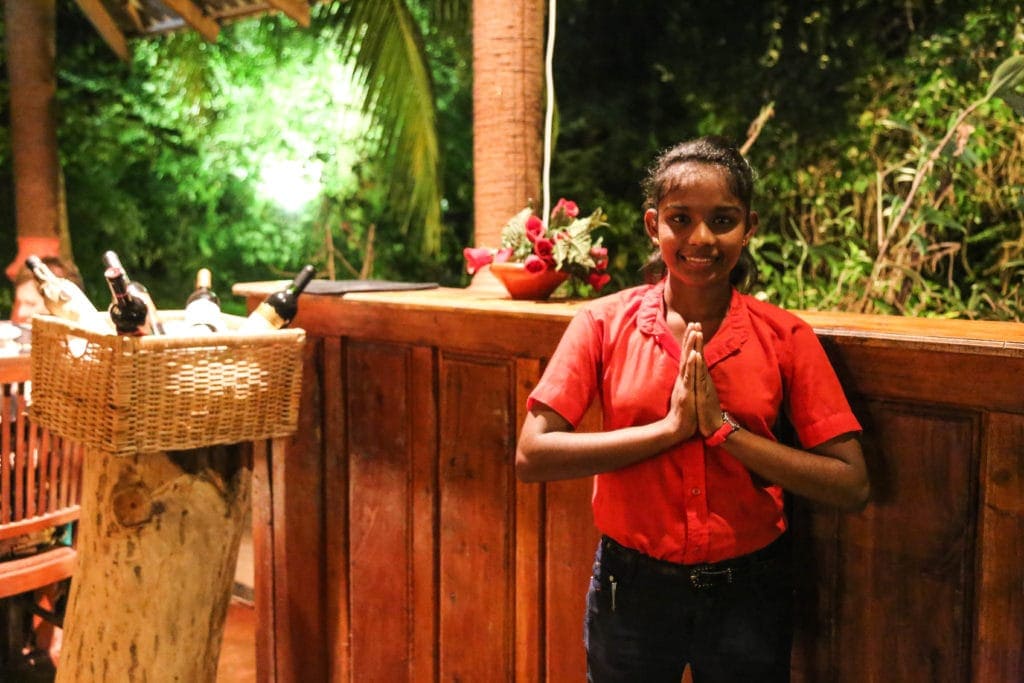 We had their buffet dinner one night which was 1500R but totally worth it. The amount of various dishes on offer were amazing and quite frankly delicious. The chef told me they cater for the guests each night, swapping up various themes such as Italian, French and other Western dishes as well as Sri Lankan too. 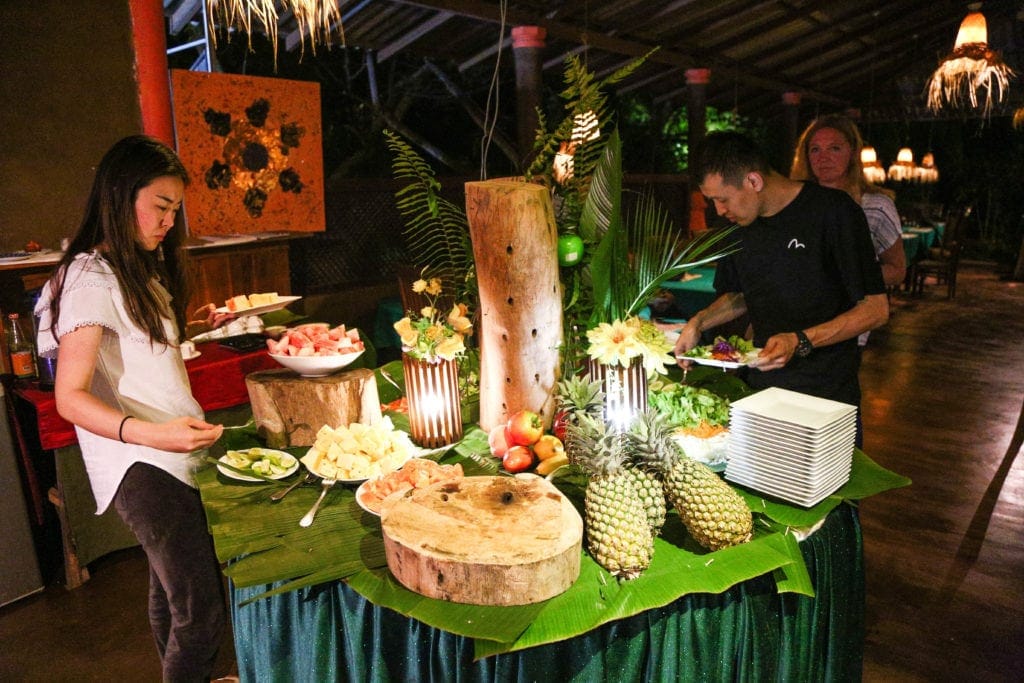 Things to do in Dambulla 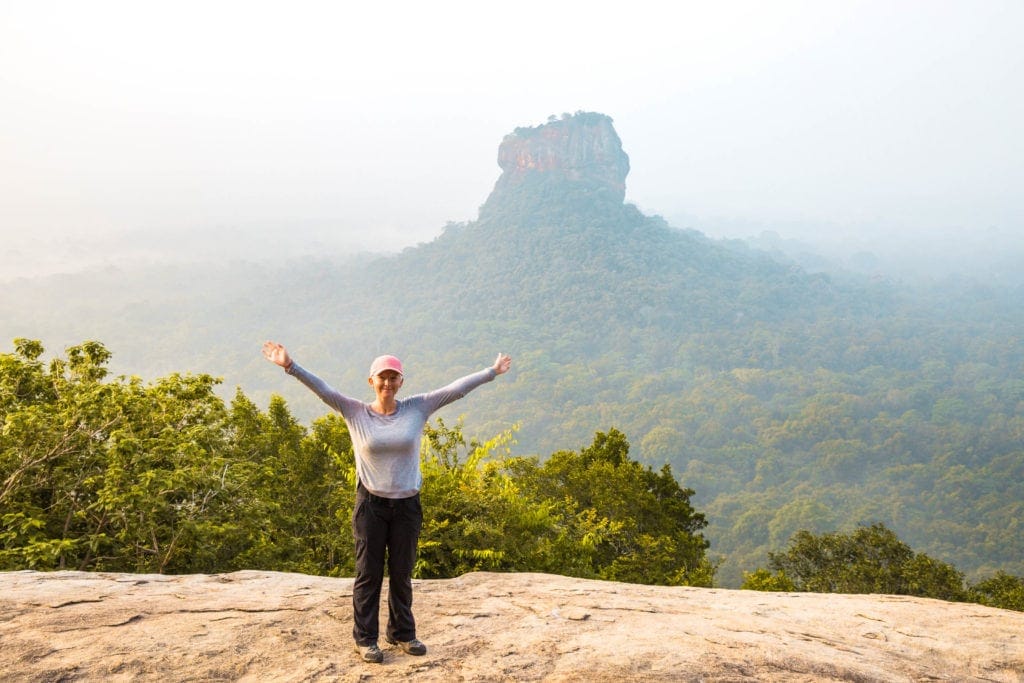 On the top of Pidurangala Rock opposite Sigiriya Rock

So the first morning we were in Dambulla, I somehow managed to get Steve up at 4:30am to go on a sunrise tour to Pidurangala Rock, the rock next to Sigiriya. The first thing I learnt about Sigiriya is; it’s the most expensive tourist attraction in the country costing US$30. So you’re paying that much just to climb a rock essentially. Instead, we paid US$15 each to climb up the rock next to it (entrance fee was 500R). I’m a bit bummed out that we paid US$15 each for a tour because it wasn’t really a tour and more like paying for a driver instead. If we had arrived earlier in Dambulla the day before, I would have just arranged something with a tuk tuk driver for much less like other people did. But, I enjoyed the walk up to the rock which took about 30 minutes. Just make sure you bring a torch with you although the light on your phone should also be OK too. When we got to the top, there were probably about 30 other tourists up there too, although not as busy as Sigiriya as I heard. 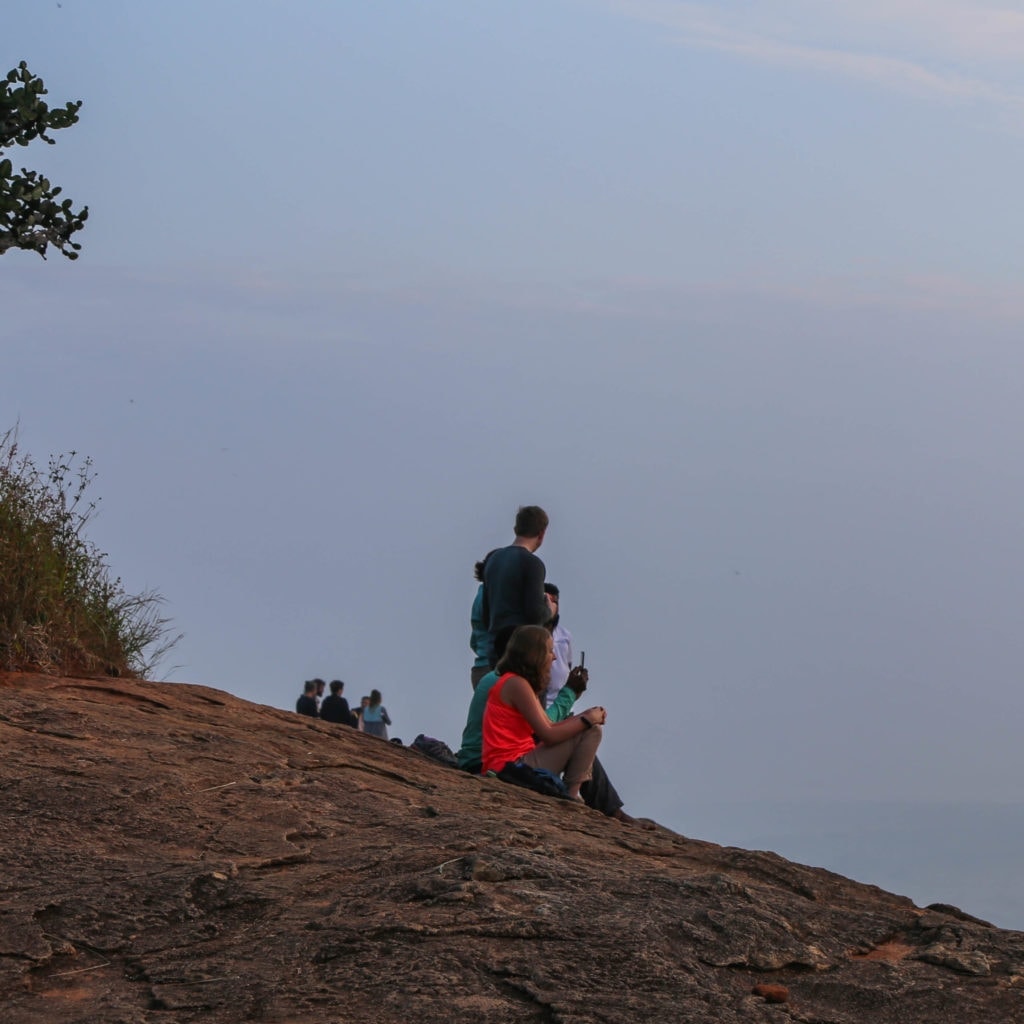 Other tourists admiring the view at the top of Pidurangala Rock

It was beautiful seeing Sigiriya from this mountain and the view out to the distance. There wasn’t much of a sunrise but we waited it out until the sun’s rays started to shine down through the jungle and by that point the majority of other tourists had gone. I overheard them mention how it was much quieter there than at Sigiriya rock so that was a blessing in disguise for us. 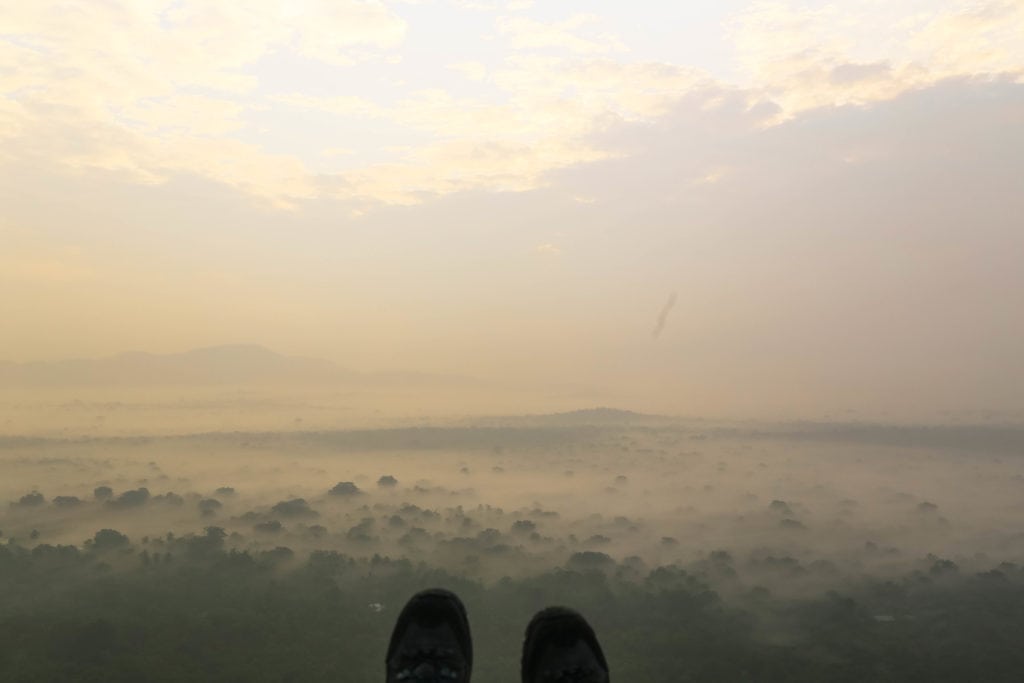 At the top of Pidurangala Rock

After the climb to the rock, we asked the driver to drop us off at the Dambulla Temple Caves. 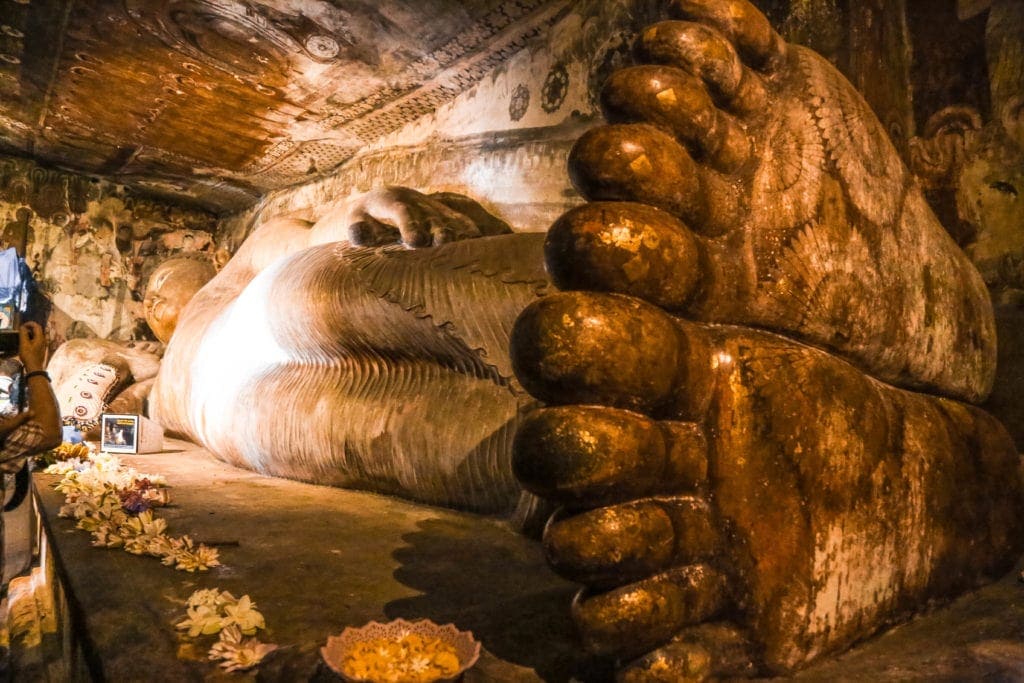 One of the many temple caves in Dambulla

Originally we wanted to visit here as soon as it opened at 7:30am to avoid the crowds but our hotel seemed to think it would be fine visiting at any point of the day and it was also only a five minute drive from our hotel. We could even see it from our hotel room, it was that close! 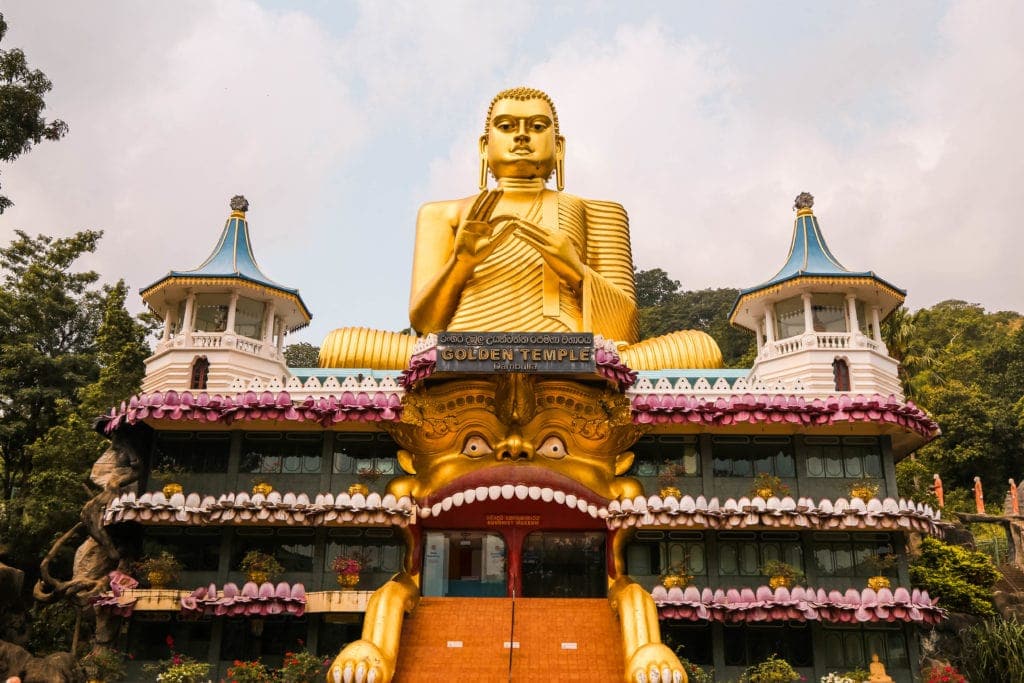 But when we arrived, the mass tourism had truly taken over this place. A friend of mine saw my insta story from when we were there and she couldn’t believe it. She sent me a picture of when she went there a few years back, it looked very quiet, serene and beautiful. This was not what we were seeing. Firstly we were charged once again to visit this temple 1500R each (something my friend was shocked to hear as payment wasn’t requested when she went) and again to put our shoes away because you can’t walk into a temple with shoes on. 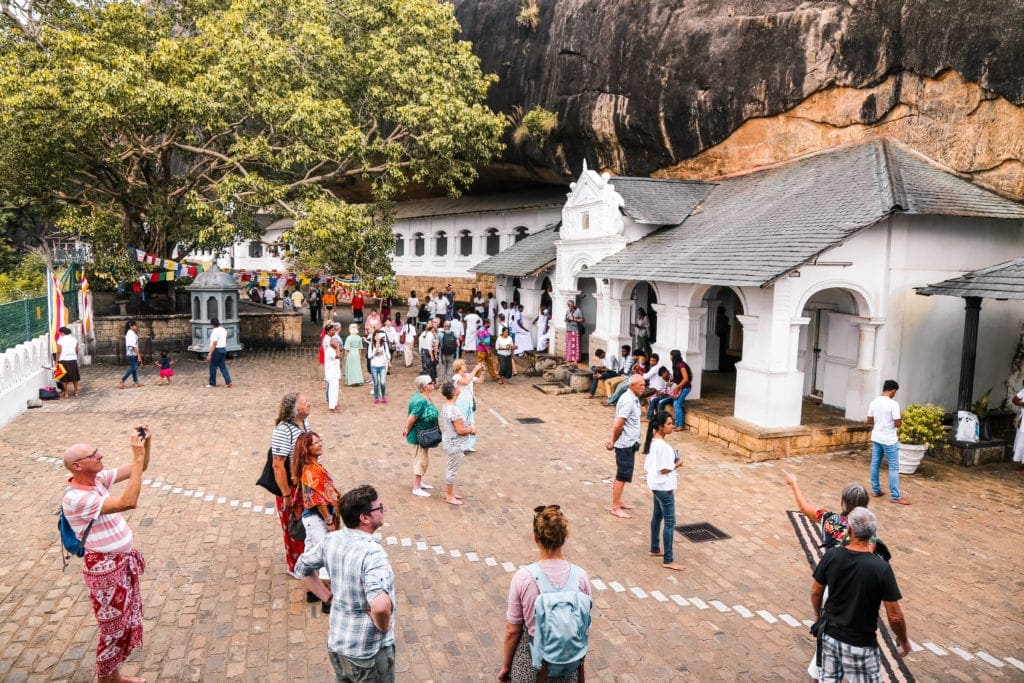 There was chaos with tours, people everywhere and no real sense of structure. Monkeys were everywhere trying to pick-pocket tourists, and trying anything to get to their hands on food. It was sad to see that the tourists were more interested in the monkeys and taking photos of them rather than the actual caves because the caves were absolutely incredible. 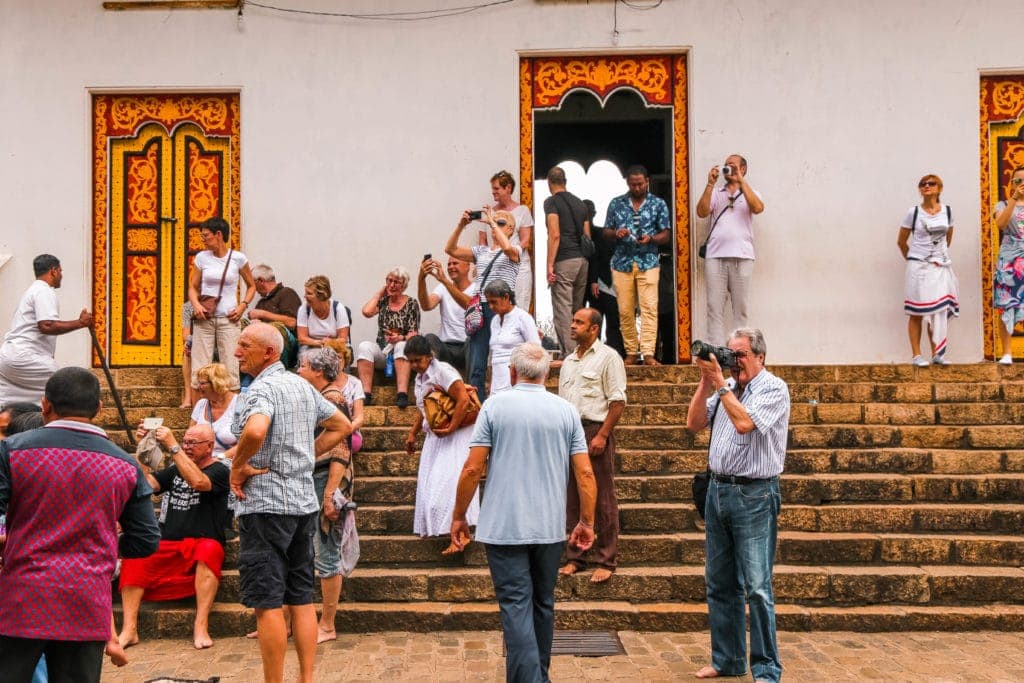 Tourists seemed more interested in the monkeys than the caves!

We counted around 5 caves in total which included incredible murals on the walls, buddha statues in each cave that must have been thousands of years old, and yet we couldn’t pick up much of a good energy in any of them. I suspect the mass tourism and now theme park esque feel to the place had completely ruined it. But I can walk away from the caves saying they were definitely worth the visit to Dambulla. 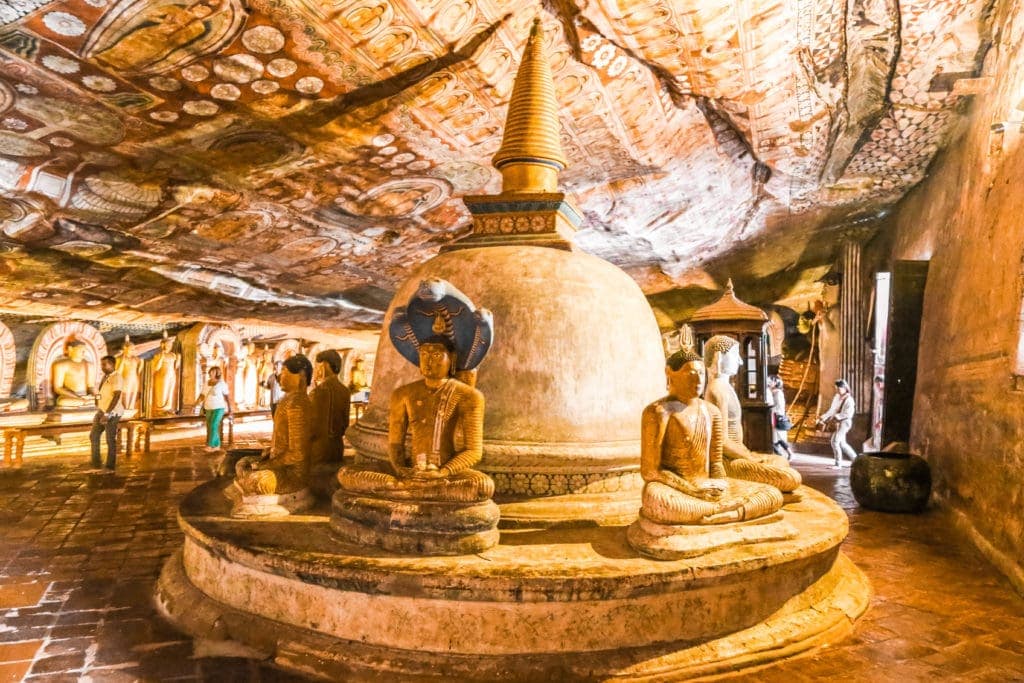 Inside the incredible Dambulla Cave Temples

So, after a great stay at the Sundaras Resort, I can definitely say I’m pleased we went up to Dambulla for a couple of nights, especially to visit the cave temples because they were incredible. I just wish we went there first thing in the morning before the crowds turned up. Lesson learned for next time!

Have you been to Sri Lanka, let me know how you found it below!