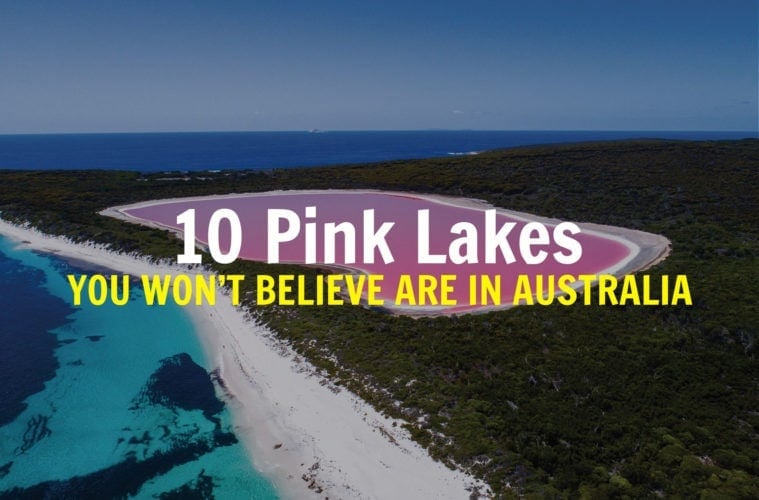 Did you know there are over 10 pink lakes in Australia?

It’s funny to think we thought Mexico had a rare pink lake when we nearly visited one there last month, but it turns out there are loads of pink lakes right on our doorstep in Australia.

Find out why you need to put the pink lakes in Australia on your bucket list right now!

Visiting Australia for the first time?

Buy our favourite travel guides below! 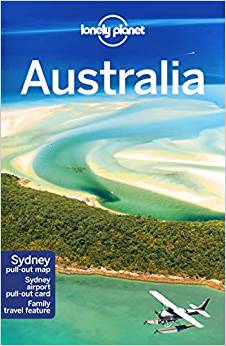 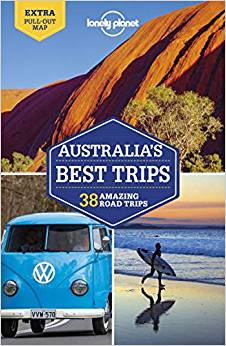 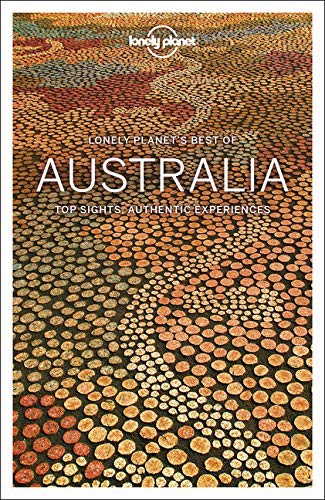 How we found out about the pink lakes in Australia 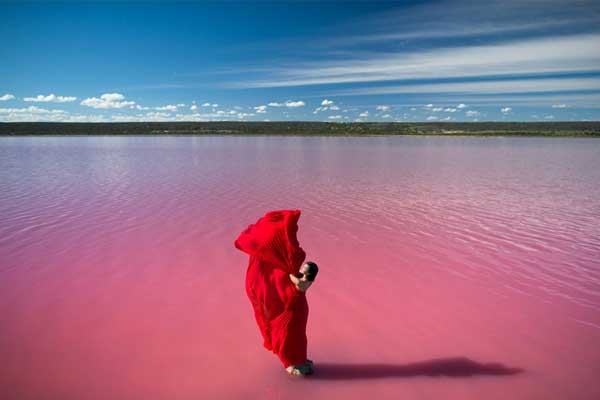 Then we remembered when Gary Pepper Girl did that Lancôme campaign right in the middle of one of Australia’s pink lakes. So, we did a bit of research into the pink lake phenomenon and it turns out there are over 10 pink lakes in Australia worth visiting.

Why are there pink lakes in Australia?

Just a quick one if you’re wondering how a pink lake is formed:

⇒Firstly, it has to be a salt lake

⇒During the hot weather, the algae in the water mixes with the salts to turn the lake pink. It’s as simple as that.

⇒Most pink lakes don’t stay pink permanently, they change colour all the time mostly from a lilac to a bright bubblegum pink colour throughout the day and in certain times of the year.

⇒If you’re wondering whether you can swim in a pink lake, there’s no reason why you can’t but most pink lakes in Australia are off limits as the locals are trying to protect them. If you find a pink lake you can swim in, make sure you don’t have any open wounds as they’ll be seeing a lot of salt in them once you take a dip. 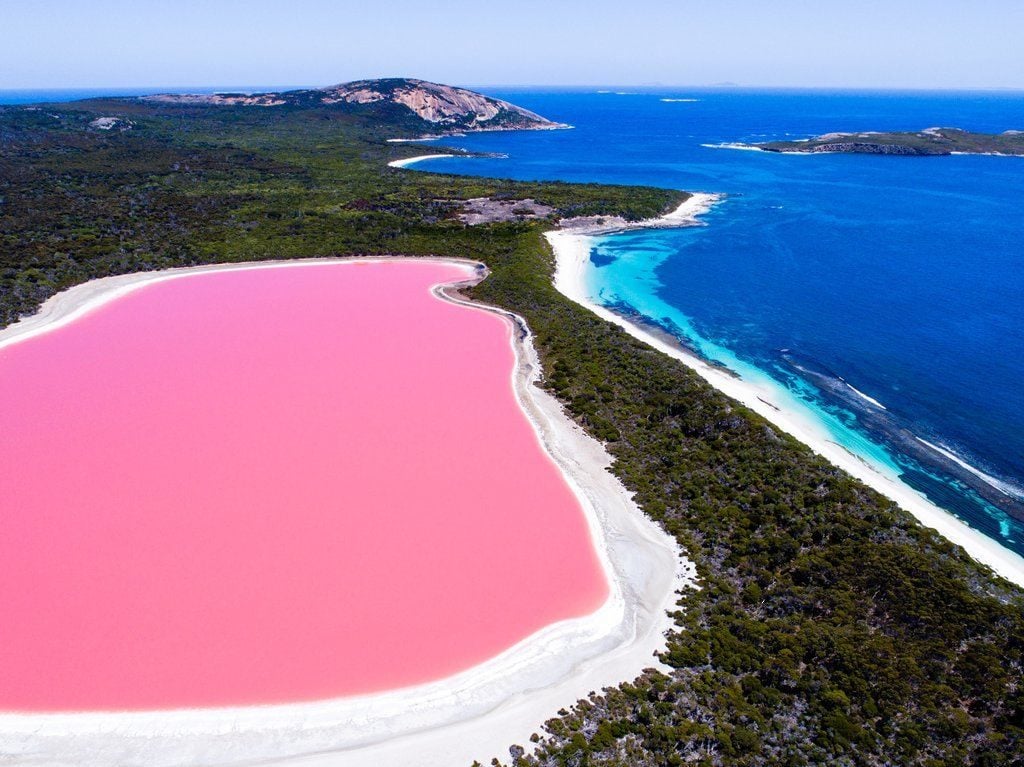 Starting with Australia’s most famous pink lake is Lake Hillier located on Middle Island  in WA. Unlike other pink lakes, Lake Hillier stays the same vibrant bubblegum pink all year round.

It’s not that easy to get to the 6km island, you can only view the pink Lake Hillier by a scenic flight or by boat. If you’re going via a boat tour, you’ll be dropped off on the island to explore the camp ruins of Australia’s only ever pirate called Jack Anderson from the 1830’s. Pretty cool hey?

Although it’s totally safe to swim in, swimming is actually off bounds to protect this natural phenomenon. We’d imagine you’d be floating as much as you would in the Dead Sea due to this amount of salt in this water.

How to get to Lake Hillier:

Boat tours start from with Esperance Cruises and start from 7am – 4pm. They don’t run often and the next available cruise will take place in April 2019. It costs around $290 per person and includes lunch.

Helicopter tours start from $370 for adults and $310 for kids and last for 1h40m from Esperance with Goldfield Air Services. 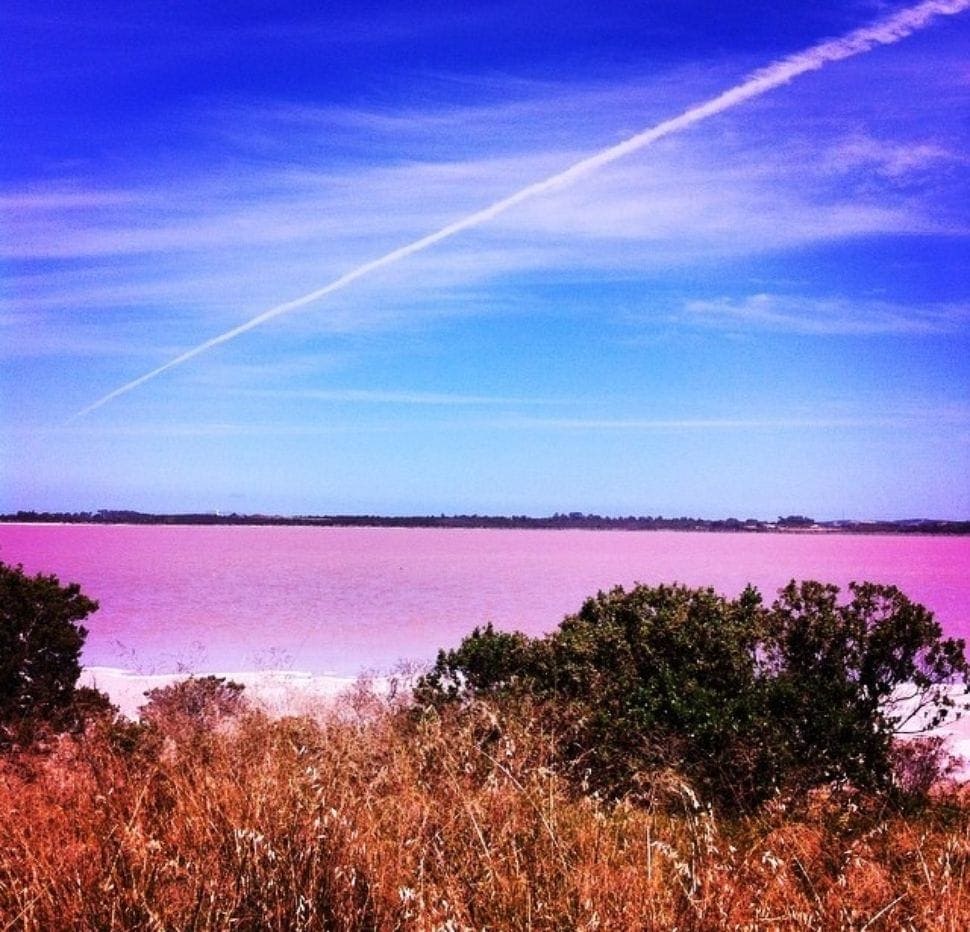 Lake Hillier’s neighbour is the infamous Pink Lake. Apparently many people get completely confused with the two lakes because of the names.

Unfortunately the Pink Lake has lost its colour over the years due to many contributing factors such as; the salt mining ceased in 2007, a new construction of a railway and highway nearby caused the loss of the colour. Although it disappoints many tourists, there’s another lake worth visiting next door.

The good news is, just five minutes away from Pink Lake is Lake Warden. Expect a bright pink lake to visit if you’re not up for a helicopter flight or boat over to Lake Hillier.

How to get to Pink Lake and Lake Warden:

The Pink Lake is just an 8 minute drive west of Esperance in Western Australia. Lake Warden is literally next door to the Pink Lake.

5.5hrs north of Perth lies Hutt Lagoon, a pink lake which stretches over a massive 70KM. Hutt Lagoon is also a favourite set location for fashion brands like Lancôme and Myer.

As mentioned, Gary Pepper Girl made headlines with the beautiful read dress she wore on this lake as well as Aussie model Jennifer Hawkins shot a fashion shoot for a Myer campaign here as well.

Depending on the weather, Hutt Lagoon’s colour can vary from lilac to bright pink and can even turn silver, it just depends on the cloud cover and the time of the day.

Hutt Lagoon isn’t just a fashion set, it’s actually farmed to make cosmetics and supplements as well as used as a natural food dye. If you’re wondering how, Hutt Lagoon’s pink colour lake is formed due to the algae in the water that produces beta-carotene. You might know beta-carotene is also found in vegetables like carrots and is used to farm these products.

Although the water might dry out during Summer and will lose it’s intense pink colour, don’t try and drive or walk over it as it’s very salty and soft meaning it can be quite slimy as essentially it is still a salt bed.

How to get to Hutt Lagoon:

Hutt Lagoon is a 5h30m drive from Perth located near to the main hub of Geraldton nearly half way up the WA coast.

Quairading Pink Lake is just a two hour drive out of Perth and what makes it unique is the fact that there’s a road that runs right in the middle of it. This road actually determines that there’s two different shades of pink throughout the year.

How to get to Quairading Pink Lake:

It’s just over a 2 hour drive west of Perth to get to Quairading Pink Lake! 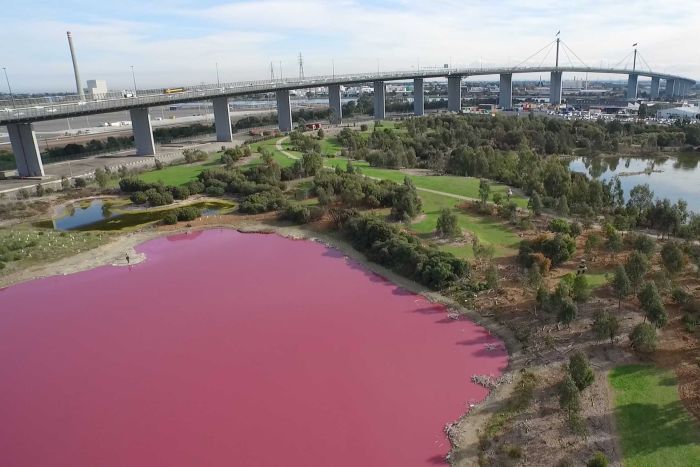 In 2017, Westgate Lake near the Westgate Bridge made global headlines as it changed  colour overnight to a bright bubblegum shade of pink.

There were many theories about why Westgate Lake changed colour but it’s actually  due to the warmer weather. The mixture of high salt levels and high temperatures caused the salt lake to turn pink. During the winter months it returns to its normal cooler colour.

And there was us thinking you had to travel far to see the pink phenomenon and you can see it right in the middle of Melbourne!

How to get there:

Read some of our favourite Australian posts 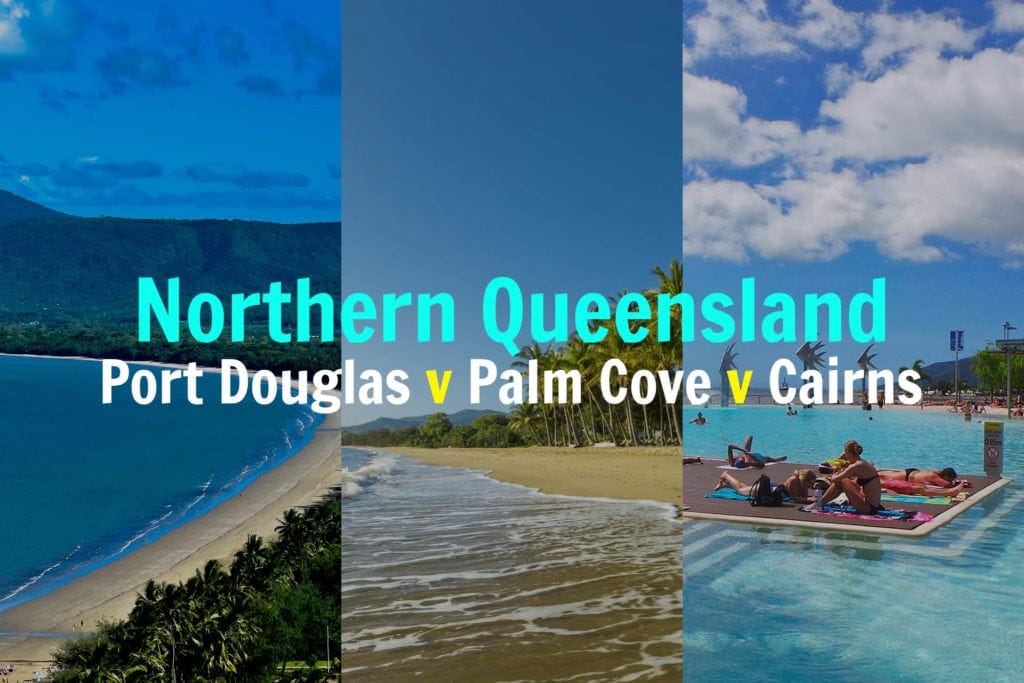 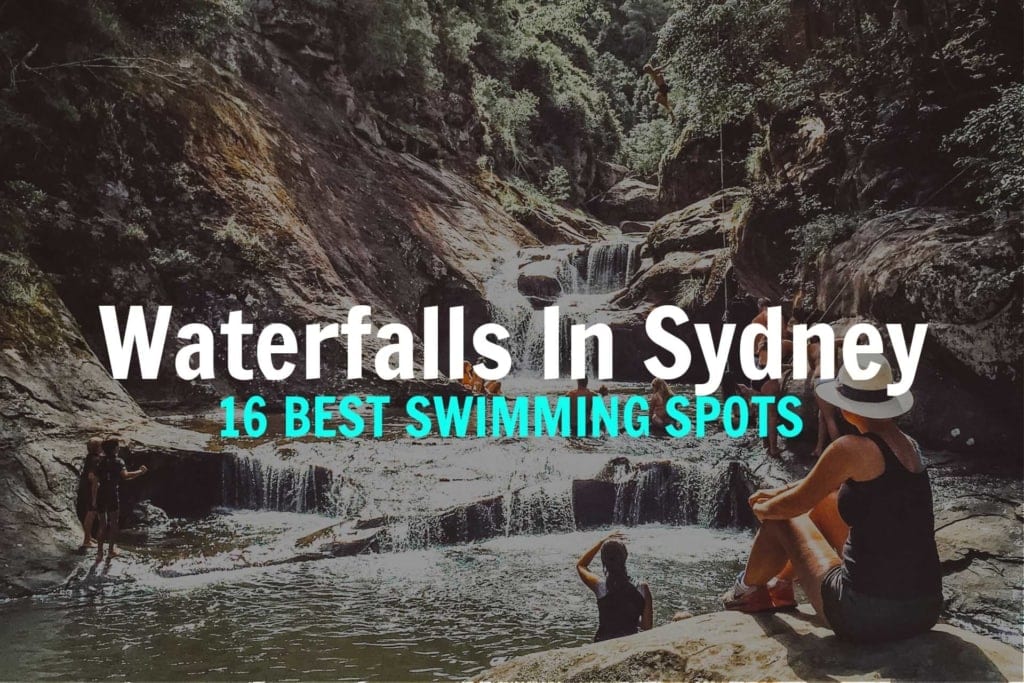 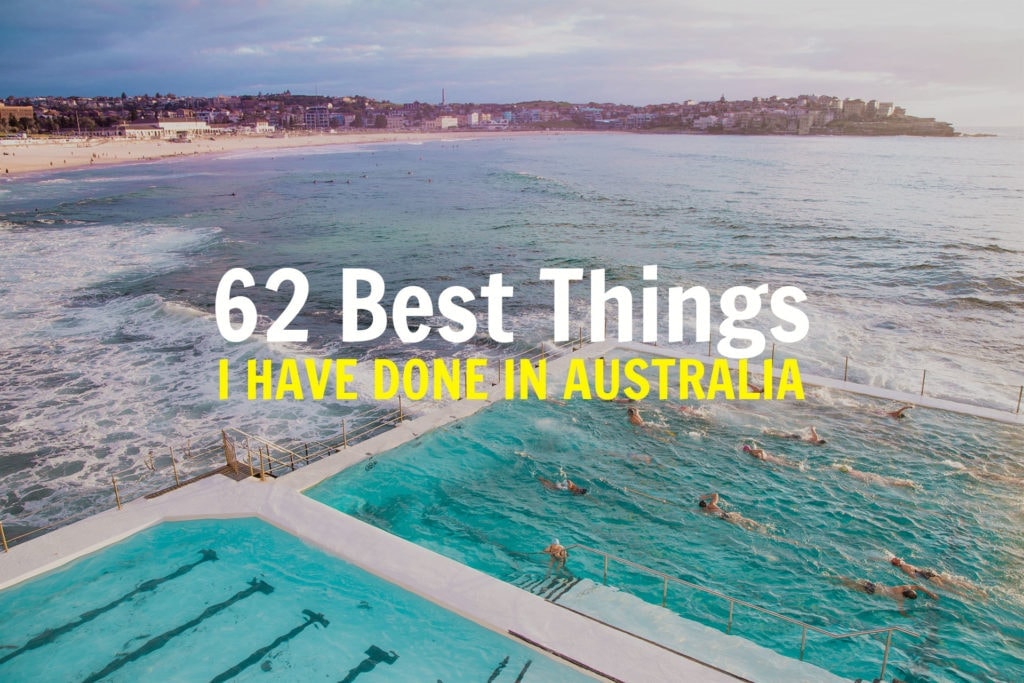 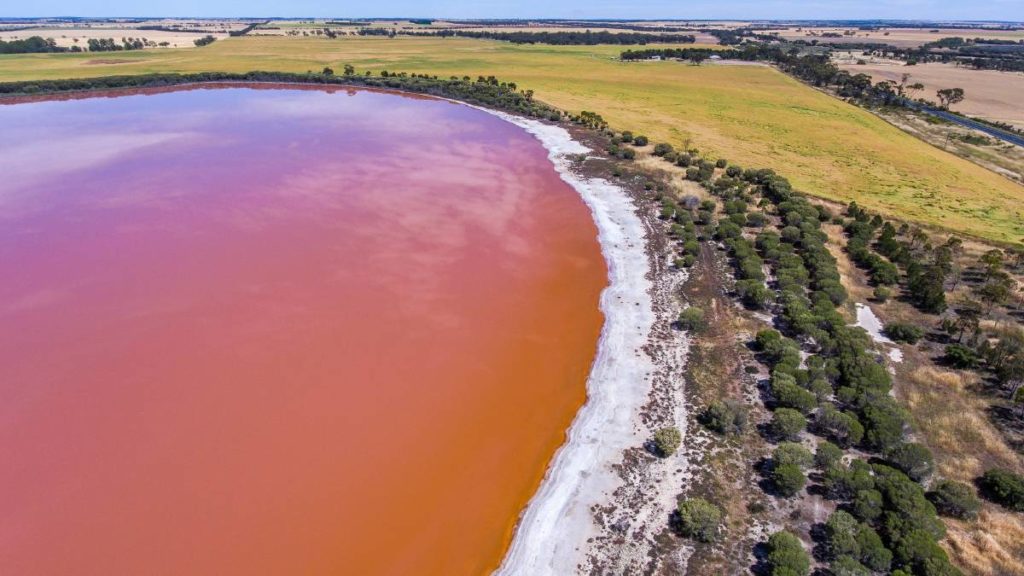 Although they aren’t as well known as some of WA and SA’s pink lakes, Victoria still has some awesome pink lakes worth mentioning.

The colours range from mauve to the classic bubblegum pink after rainfall and get whiter throughout the day.

There are walking tracks between the four lakes and you can camp at either Lake Crosbie or Lake Becking. 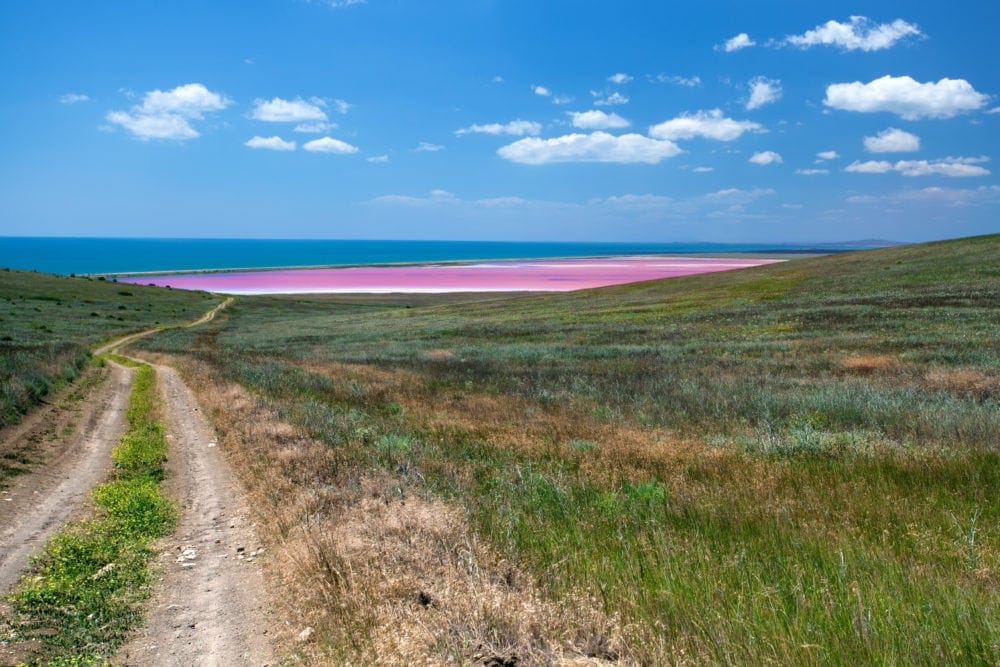 Just imagine camping at Lake Becking with views like this.

How to get to pink lakes Victoria:

Murray-Sunset National Park is a 5h30m drive North East of Melbourne and is actually closer to Adelaide by a whole 1h45m!

If you’re looking to camp at Murray-Sunset National Park, check out this post by Parks Victoria. 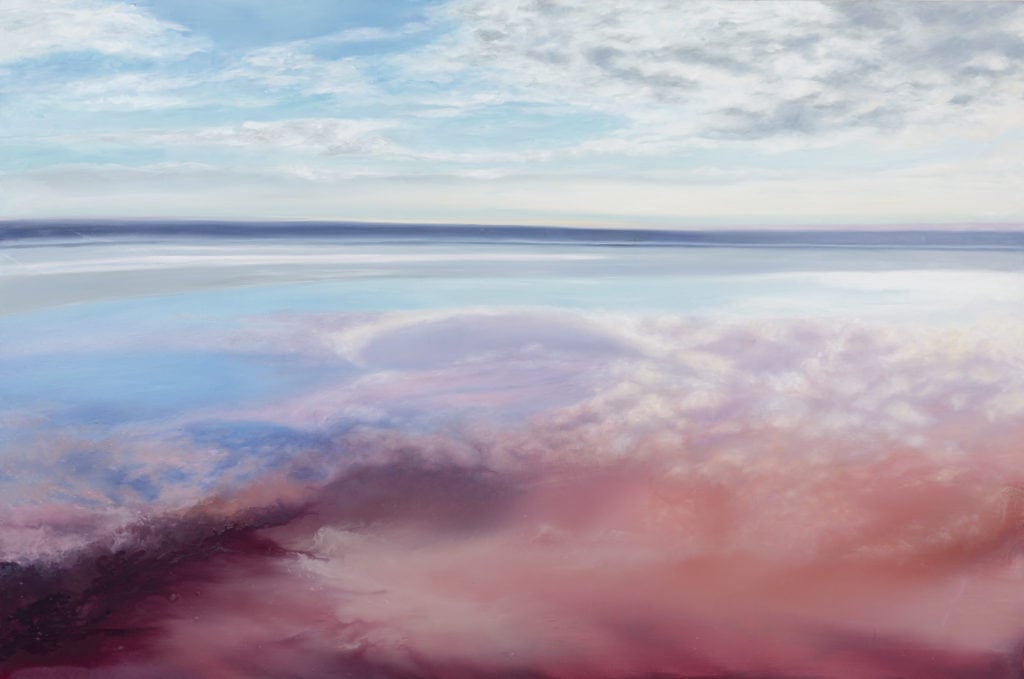 It might not be as easy to visit the other lakes as Lake Eyre actually only sees water every 3-10 years. When the lake fills up, the beautiful wildlife bring the lake alive and it’s a sight to be seen.

How to get to Lake Eyre:

Lake Eyre is a good 8h drive north from Adelaide. 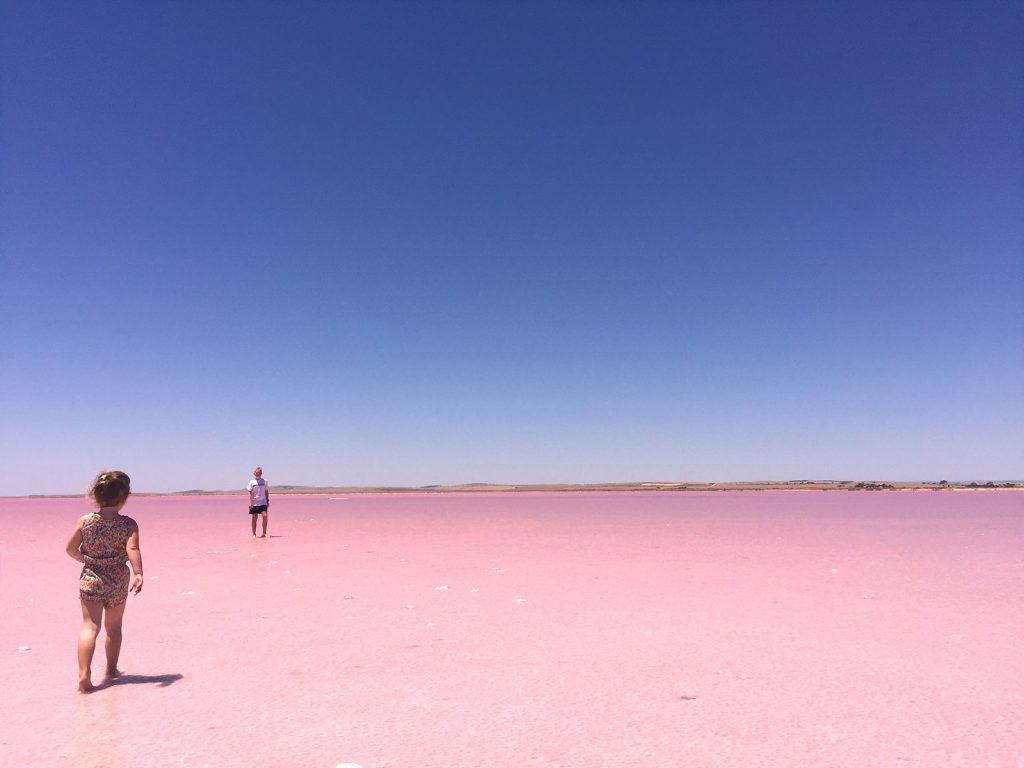 Easy to get to, Lake Bumbunga is only a 1h40m drive north west of Adelaide near the famous wine region of Clare Valley. The lake is actually really shallow so it’s a popular spot for instagrammers and photographers.

How to get to Lake Bumbunga:

Located near the town of Lochiel, Lake Bumbunga is a 1 hour and 40 minute drive north west from Adelaide. Lake Albert is just a 1h40m drive south east of Adelaide and is named after Prince Albert. The lake sits as the gateway to the Coorong National park which has salt pans, sand dunes, wild beaches and wetlands which stretches over 150km.

How to get to Lake Albert:

Lake Albert is a 1 hour and 40 minute drive south east from Adelaide.

One of the most popular pink lakes in Australia is Lake MacDonnell. Although it’s becoming a popular Instagram spot, it actually takes a good nine hour drive west of Adelaide to get there.

Previously a salt mine, Lake MacDonnell is the largest gypsum mine in the southern hemisphere and can produce more than one million tonnes of gypsum a year.

How to get there:

It’s a 9 hour drive west of Adelaide to reach this insta-famous pink lake!