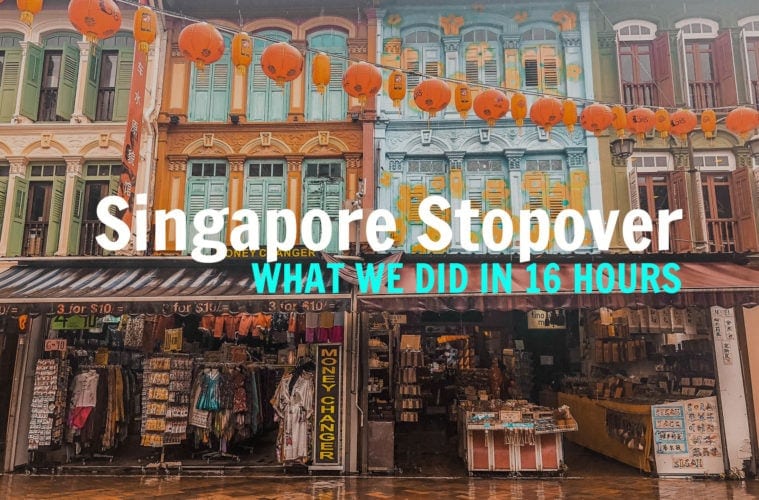 Singapore stopover: what we did in 16 hours in Singapore

Because we booked our first destination of our around-the-world-trip from Sydney to Maldives (which only cost us $350 each with Scoot), we had a stopover in Singapore for 16 hours. To be honest, we hadn’t researched it that much, but I knew there were a few things I wanted to tick off the list such as;

An 8 hour flight meant we arrived into Singapore at 3:30am, that’s 6:30am Sydney time. Surprisingly I pretty much slept through the entire flight but we still needed a few zzzz’s. We found an area with a few people sleeping before we passed through to the arrivals gate, and so we got a space on the floor and got some more rest. 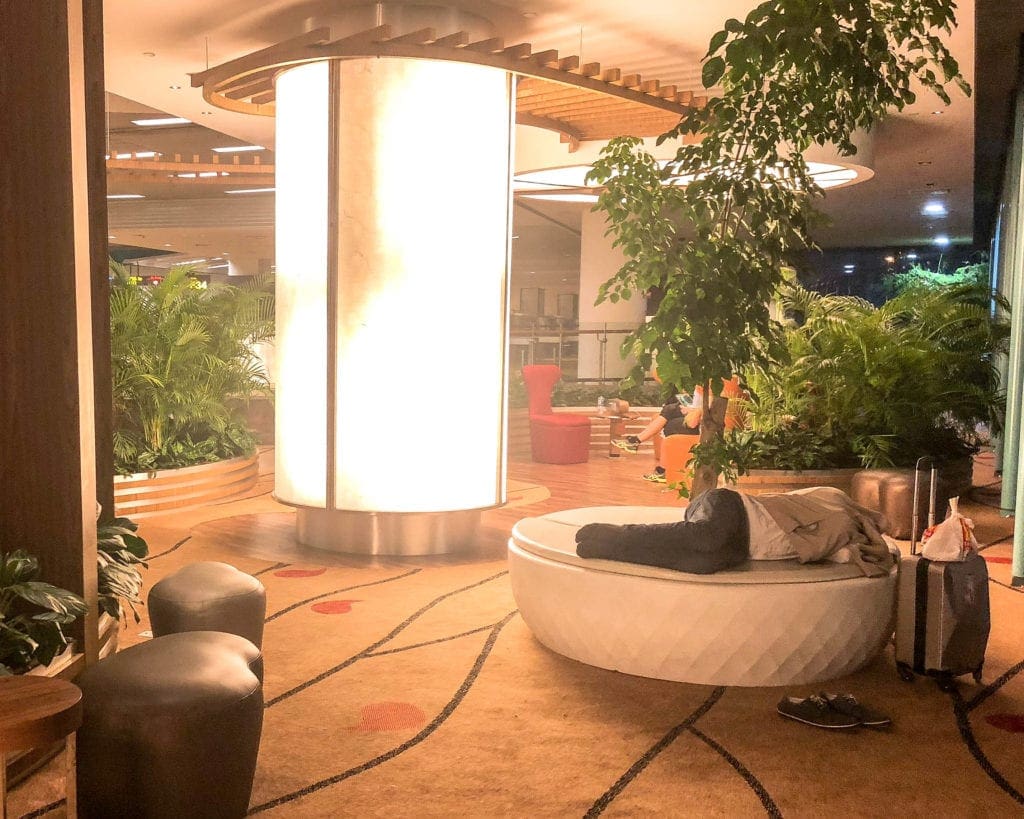 The sleeping area just before you go through to immigration

I woke up at 5am, did some research and by 7am I got Steve up and about to start our adventure into the city. 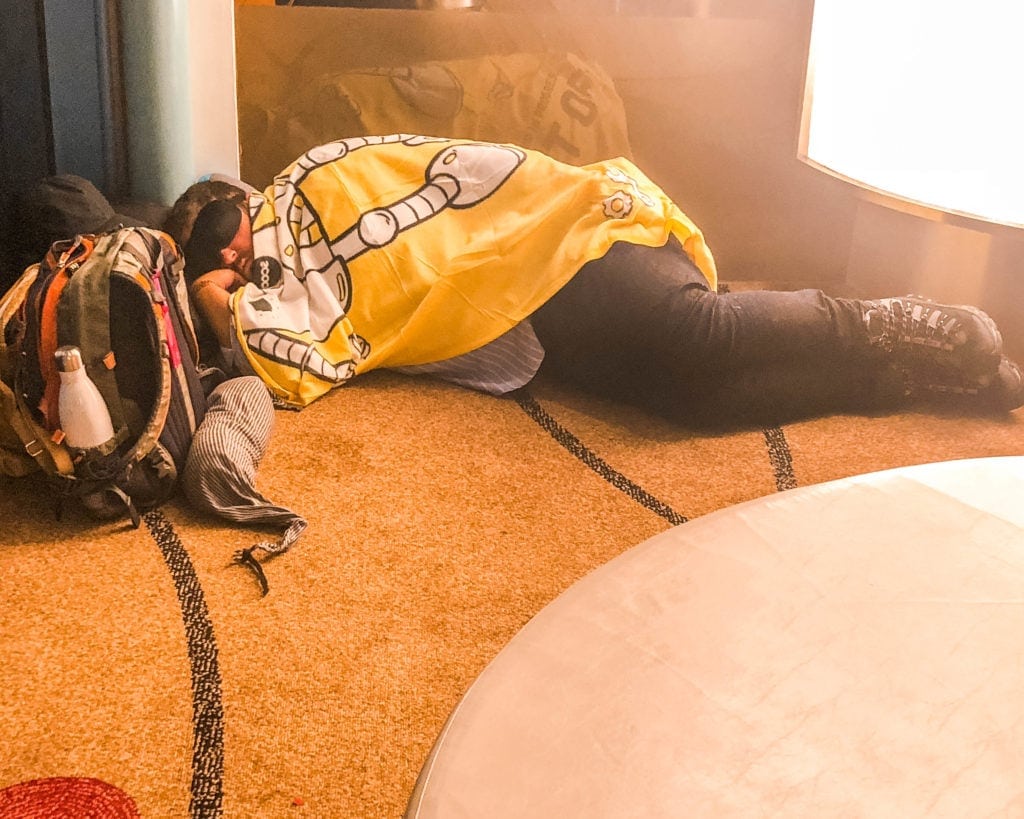 Stevo fast asleep on the floor in the airport!

We waited until 8am when the MRT (metro train) ticket office opened so we could purchase the travel day card which gives you access to unlimited stops on the trains.

As we waited for the ticket office to open, we went to a café in the airport to be astounded at the cost of $9 for a cup of herbal tea. WTF? It must win the award for the most expensive herbal tea I’ve seen anywhere in the world. To conclude, Singapore was expensive. I had read electricals were cheap, but nowhere near as cheap as in Australia. For example, a GOPRO product I wanted was $110 in Singapore compared to the $60 in Australia. Steve nearly screamed when he was told a bottle of beer was $19! Seriously, $19 for a beer?? I’ll tell you what we actually spent at the end of this post. 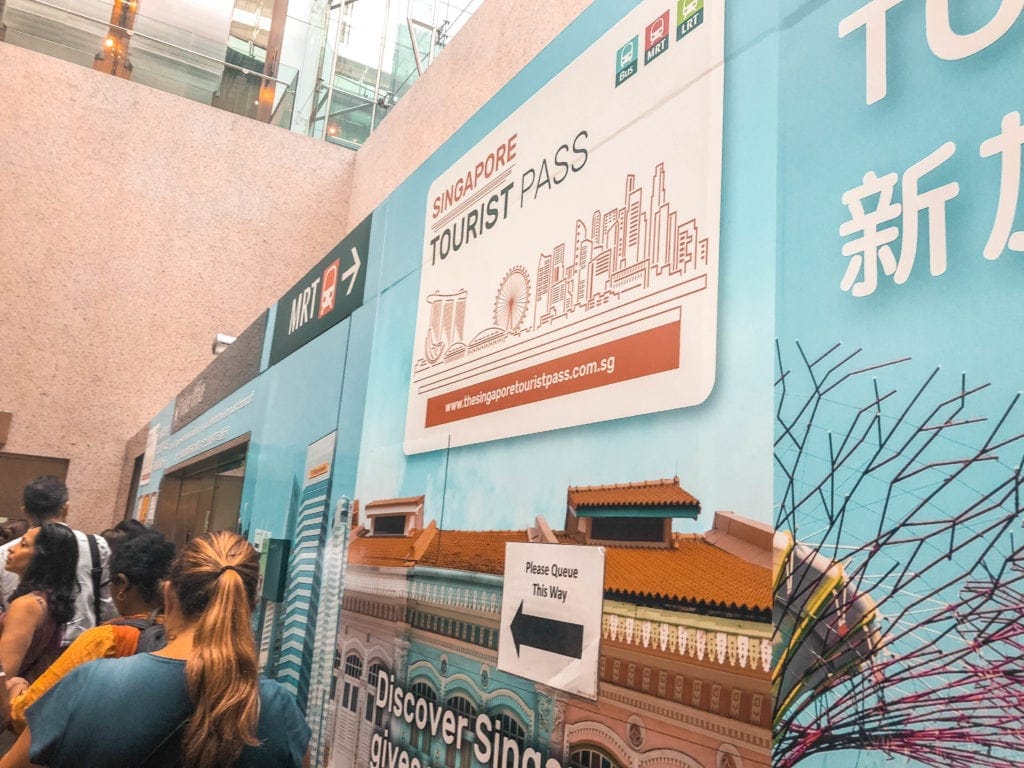 Queuing up to get a tourist travel day card.

Getting the train was super easy and we didn’t need any help at all. Everywhere was well signposted and I was very impressed with how easy it was to get around. 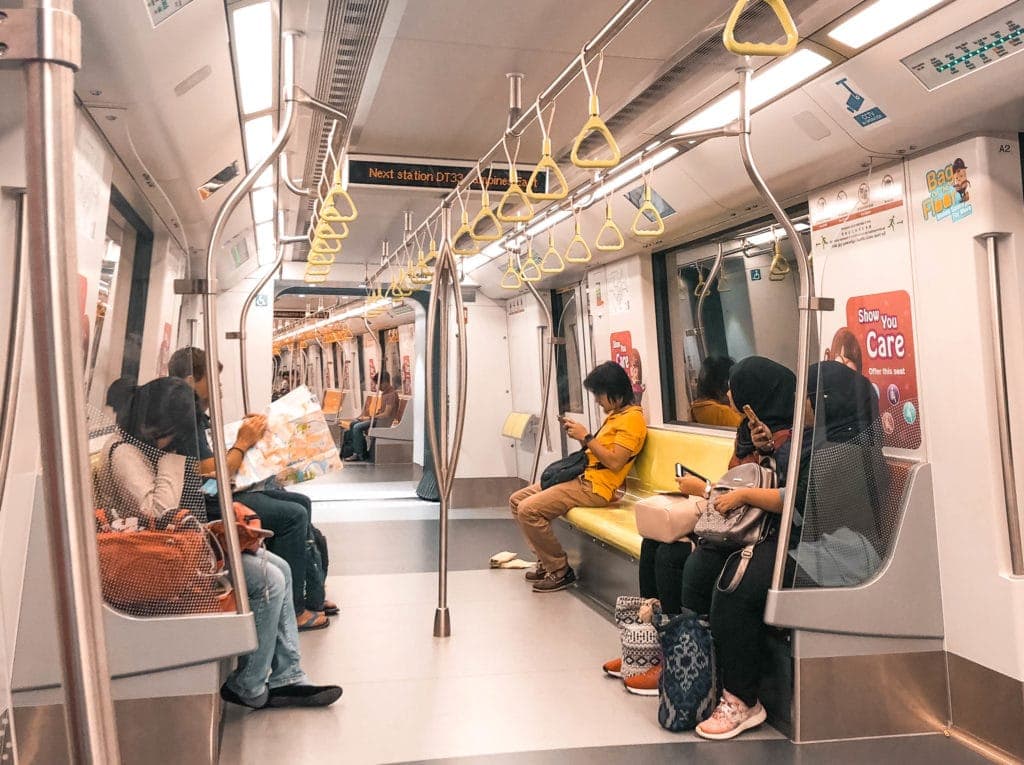 The first thing I noticed was how clean everywhere in Singapore was from the airport, to the trains, to the streets. I remember reading Danny Wallace’s ‘Yes Man’ book (which is hilarious) where he ended up going to Singapore for the weekend and was worried he’d get thrown into jail for having chewing gum in his bag. Yep, chewing gum is banned in Singapore.

Furthermore, when we went through customs, the customs officer offered me a mint from his desk, probably because I had bad breath. I went to put the wrapper in my bag which must have offended him and he made me take it out and put it in his rubbish bin because I’d get into trouble otherwise. I’d get in trouble? Straight away I knew this was going to be an interesting city. 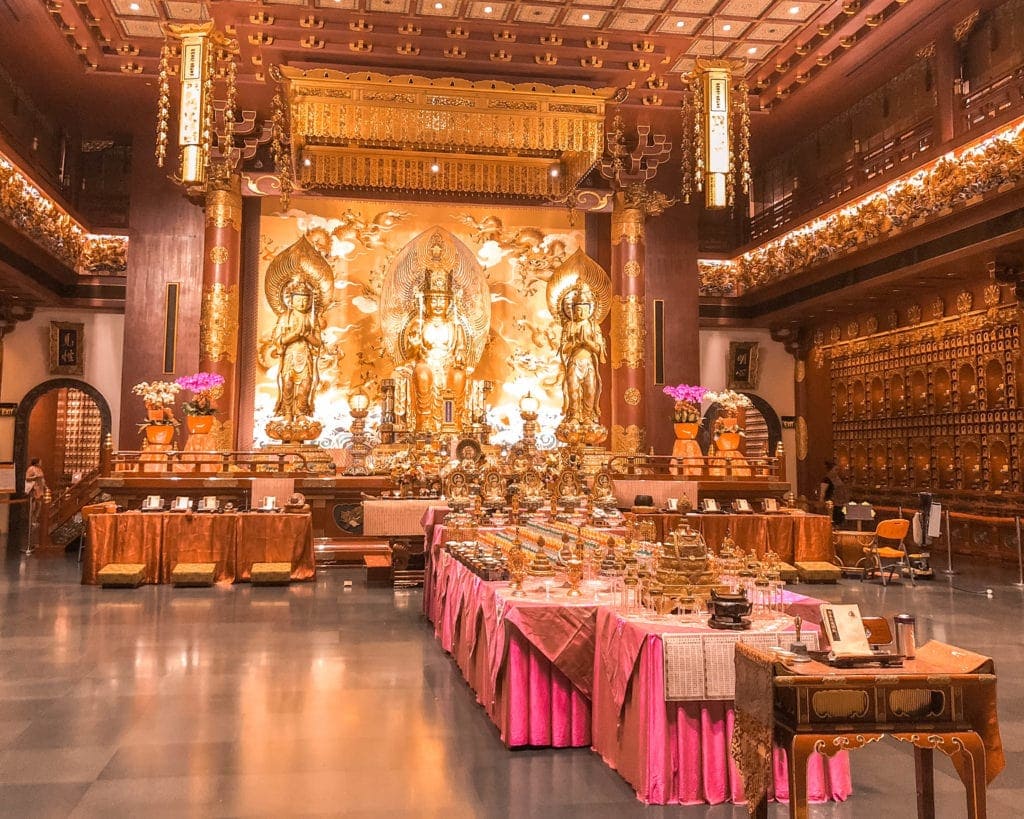 So back to the train. We jumped on the train, changed lines after one stop at Expo to the blue line called Downtown Line started our day in ChinaTown at the temple which holds Buddha’s tooth relic. Steve’s a Buddhist so I thought it would be a great way to start our time in Singapore. It was a beautiful monastery in the middle of ChinaTown and the actual tooth is located on the 4th floor if you’re heading there.

We tried to go to Maxwell Centre for food but it was raining so hard, I was worried my DSLR and Laptop were going to get soaked right through my bag so we just stopped off at a local café for a $5 chicken and rice dish (only for me to get a dodgy stomach almost straight away!). 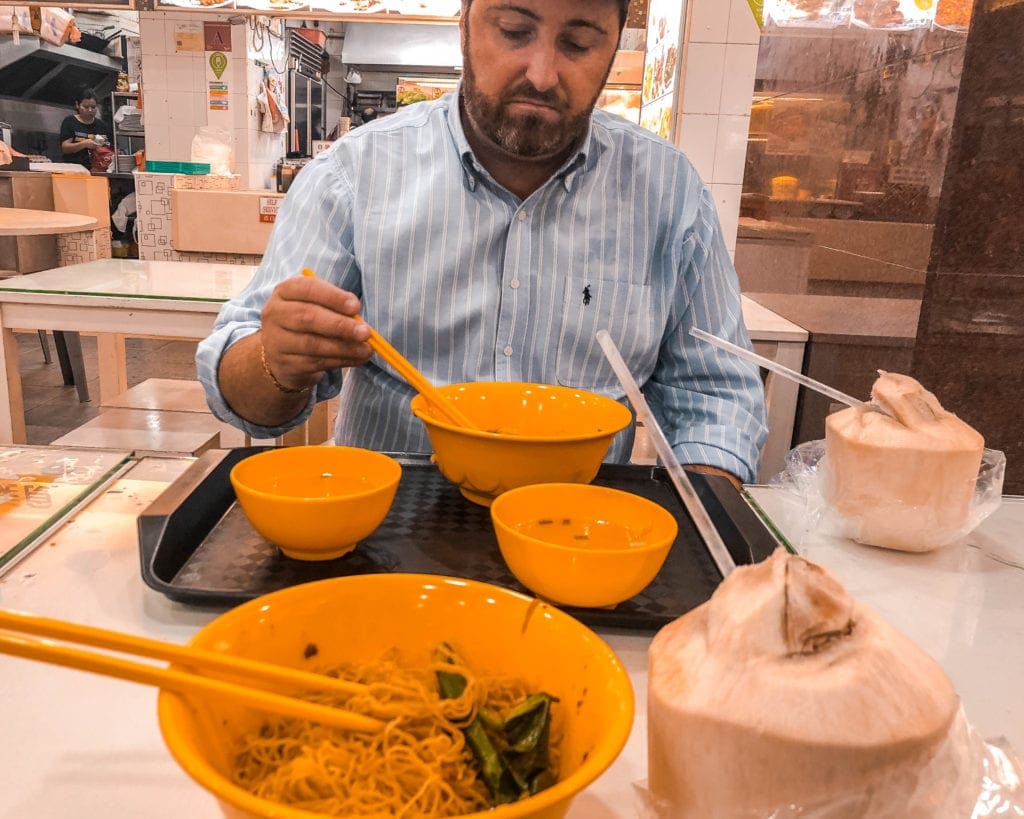 Trying out the local food in Singapore

We wanted to go and visit Little India but because it was raining, we didn’t think it would be much fun. Seeing as we’re back off to India anyway, we thought it wasn’t worth visiting but I do regret now as there looked to be some awesome temples there. 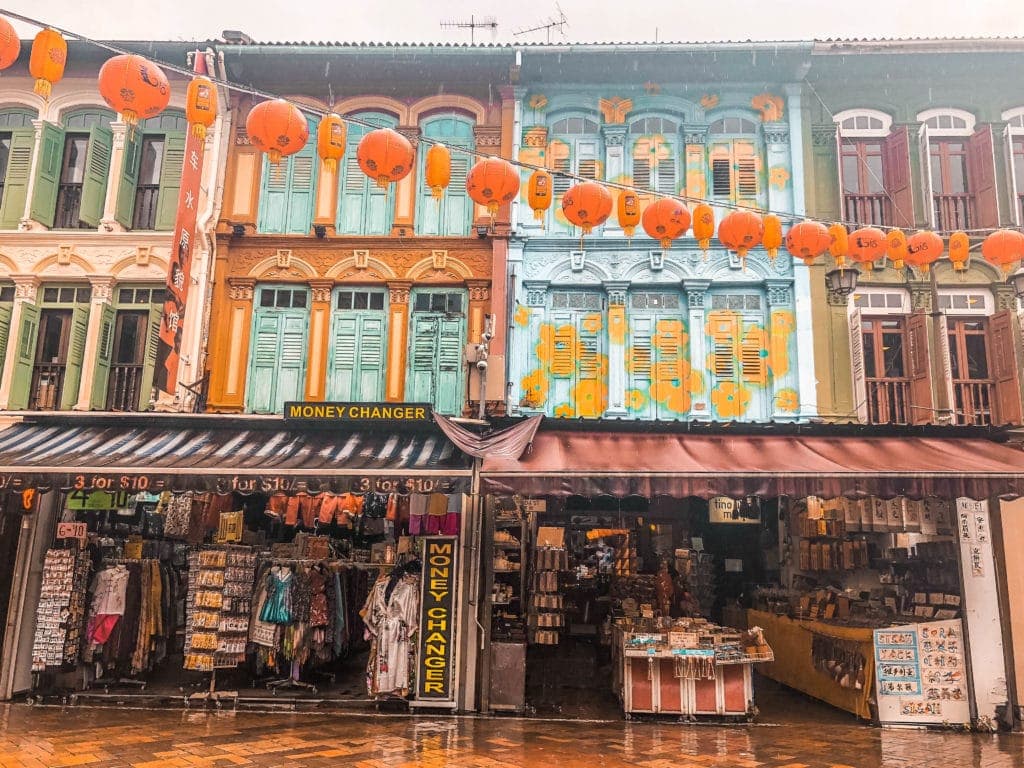 We thought we’d make a beeline to the Gardens by the Bay, somewhere we both wanted to visit and thought it might be a good idea to see the indoor gardens whilst it was raining. When we arrived, the raining had stopped, but carrying a backpack of more than 10Kilos worth wasn’t fun, and I was getting to the point of not wanting to do much more. When we arrived, they had this shuttle bus for $3 each, I thought, great idea, this means we don’t have to do more walking. But it’s not really worth the money as they only drive you a few minutes down the road to the actual indoor gardens. It was going to cost us $28 each, which would be $56 between us. Was an indoor garden really worth $56? It’s probably not much to you but when you’re travelling, every bit of money amounts up. We noticed that everything had a price on it in these gardens. If you wanted to go up to the lookout in the big trees, it was going to cost you as well. But at least the outside gardens were free and I’m pleased we got to see them as it was pretty impressive. 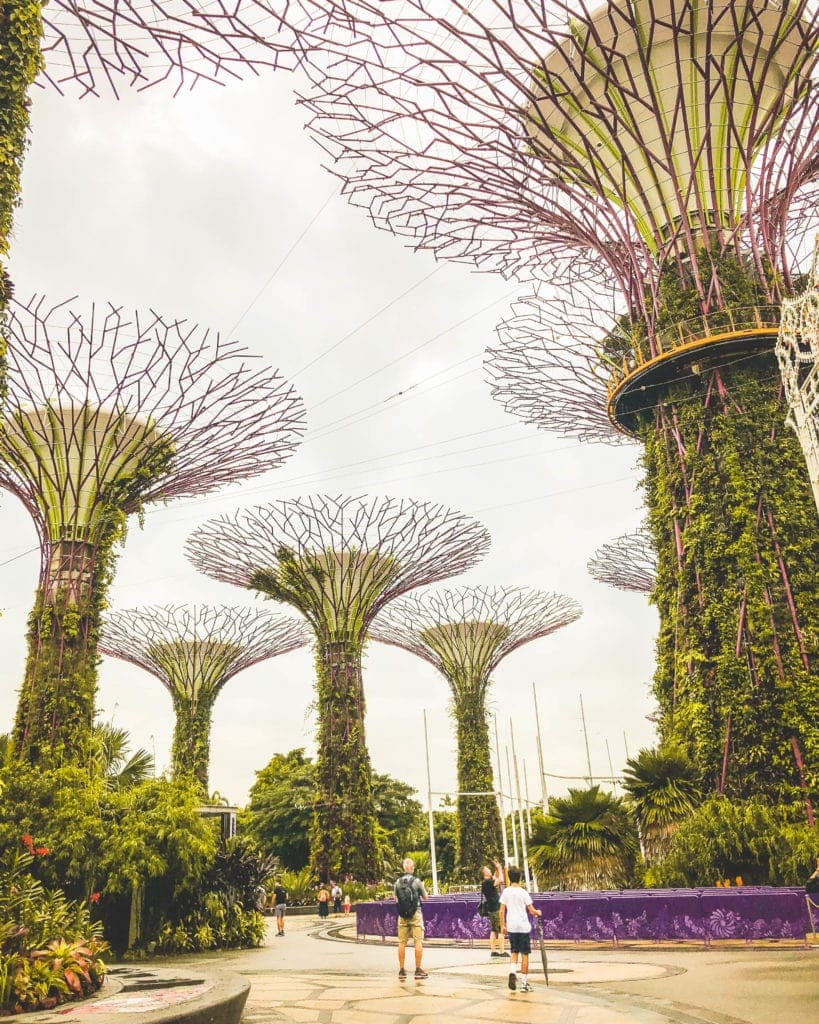 Gardens by the Bay. This would have been a fab shot to be in, but I was in hiking gear and hadn’t washed for over 24 hours.  No pretending it’s all glam here!

So we sacked off the indoor gardens and walked through the amazing outdoor one in the rising humidity. When we actually found the ticket booth for the skydeck of the Marina Bay Sands Hotel (just ask concierge in the hotel for where the ticket booth actually is), we paid $20 to go to the rooftop to see the observation deck. 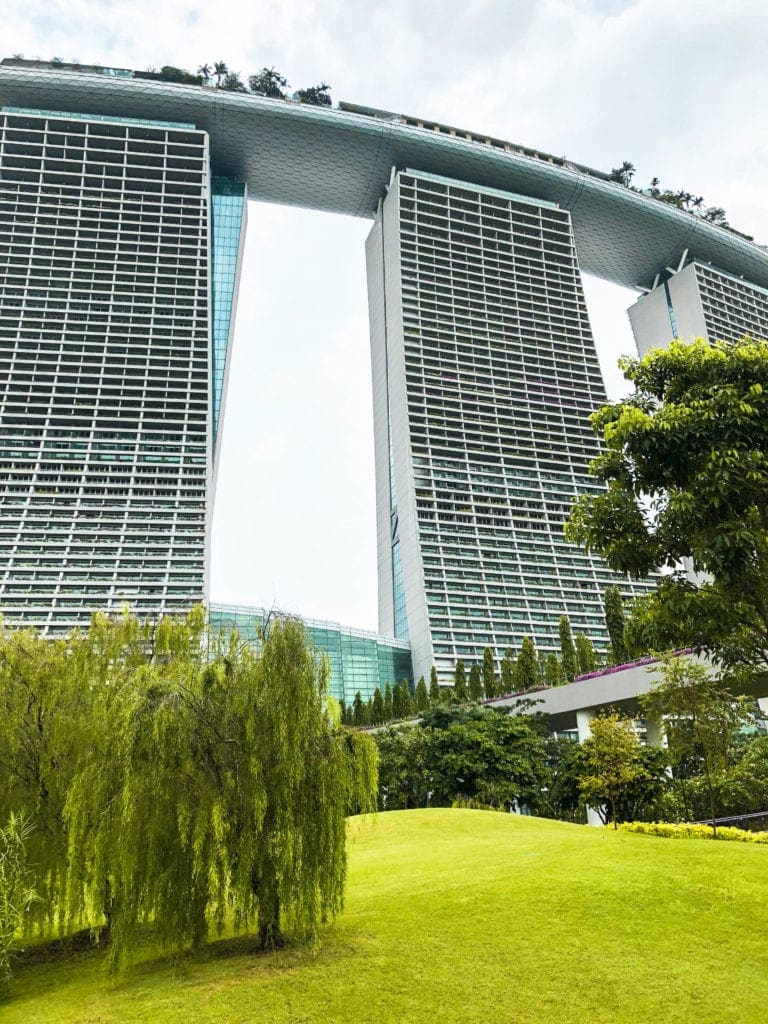 Really, I wanted to go to the famous pool but seeing as we couldn’t get in, we still wanted to check out the rooftop of the impressive building.

The famous pool at the Marina Bay Sands Hotel

When we got up to the 56th floor (in a matter of seconds, thanks to the super fast lift), we were both amazed to see the view of a sea of high rises, a floating footie pitch and obviously the famous garden we had just walked around as well as well as the rest of the city. 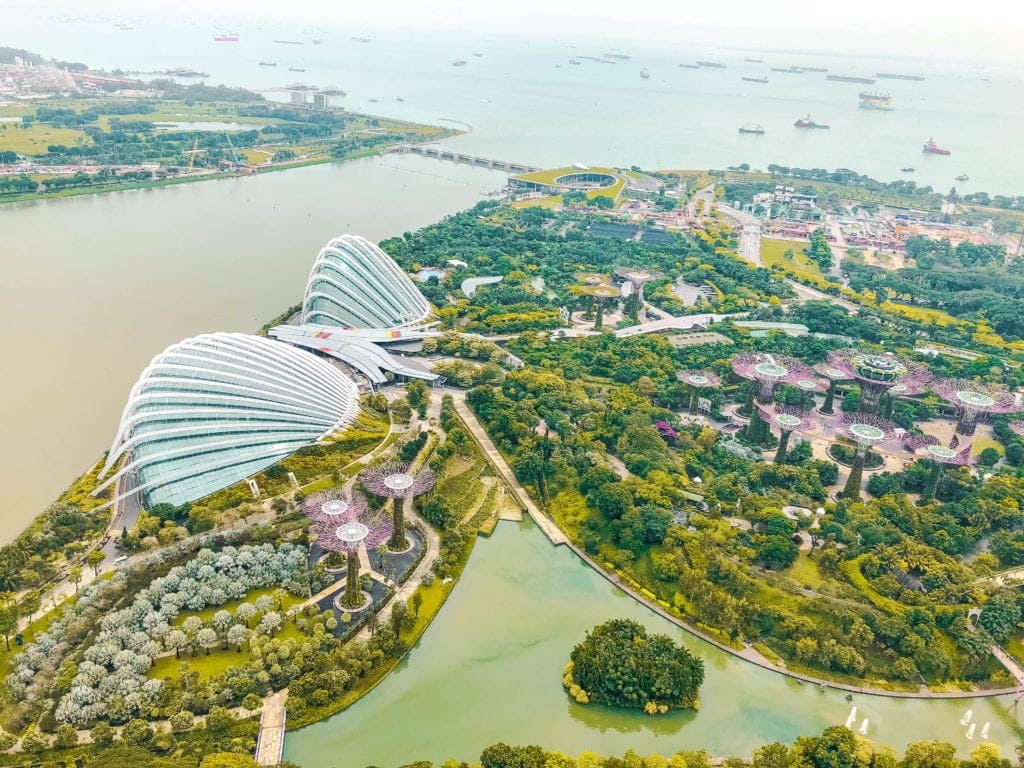 At the top of the Skydeck observation tower, Singapore

It was amazing but it was very steamy up there. We had 2 ice creams each, one after another, not only because they were good, but definitely needed.

After we had fun looking at the views, enough was enough. We were knackered. We had spent about 6 hours catching various trains and looking around and had walked a good 10KMs with over 10kilos on our backs in the sweaty temps. We decided to head back to the airport, a good 5 hours early for our flight, but we didn’t care. 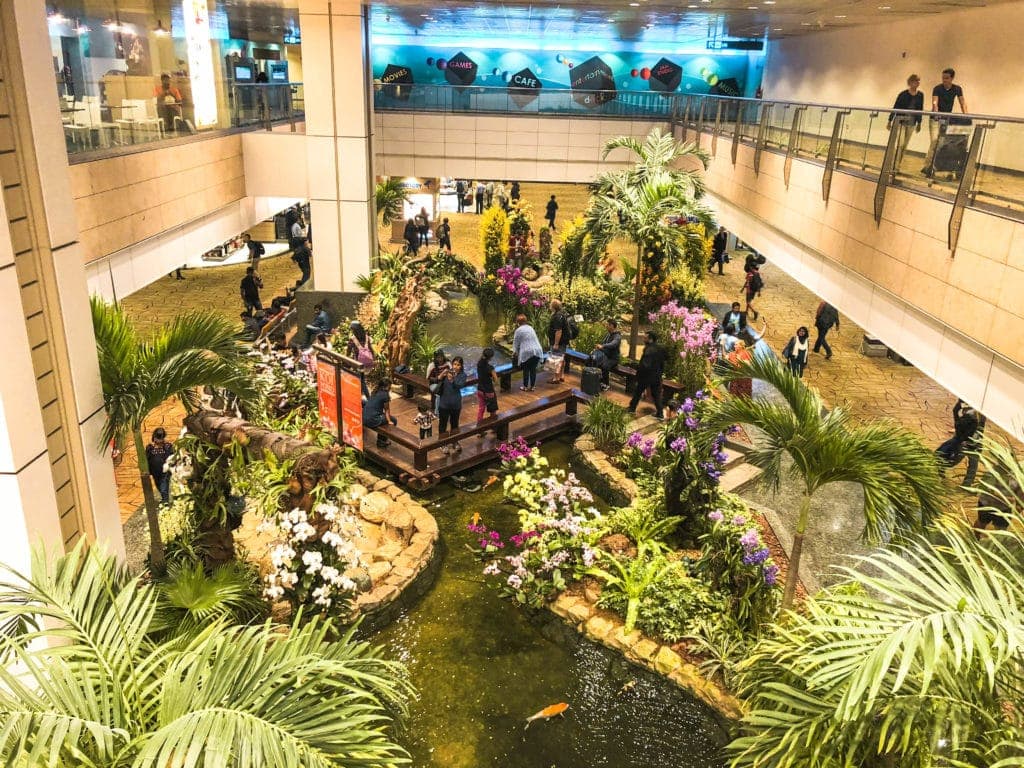 Even gardens in the middle of Changi airport

When we arrived at the airport, we were greeted with unlimited wifi, and an entertainment room. Yes, that’s right, a free cinema and games room to keep entertained, let alone a gym, and spa to use as well (at a fee). My favourite part was the rooftop garden full of my favourite flowers, the sunflower. Could this be the world’s best airport and the best thing about Singapore? 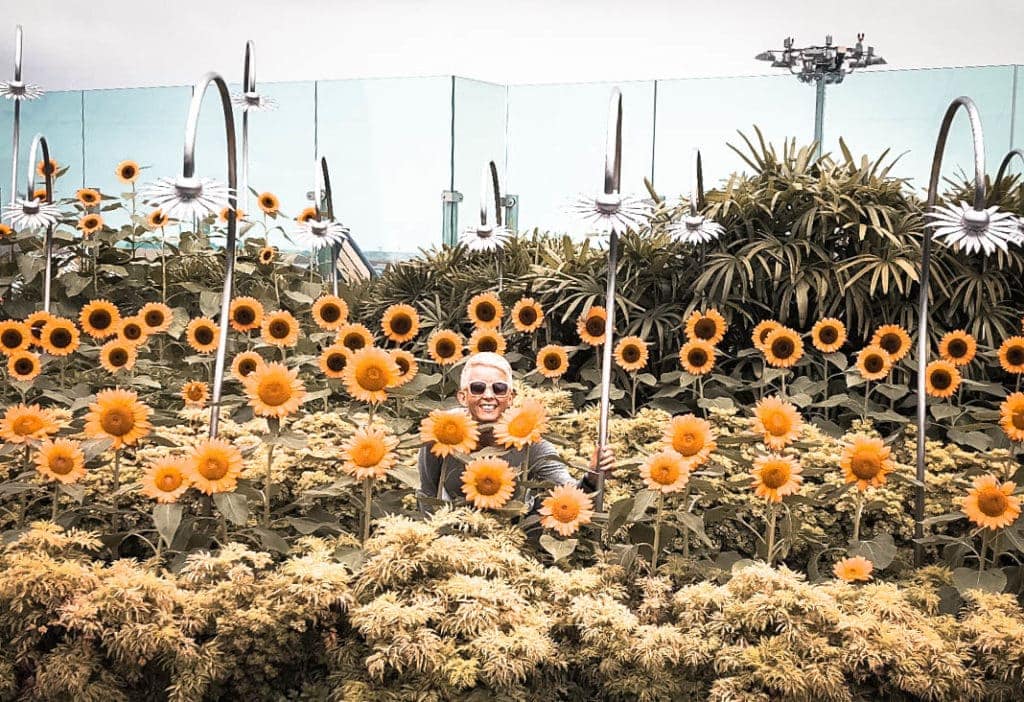 So how much did we actually spend in Singapore? Here’s a breakdown of costs:

Would I recommend Singapore?

I loved how easy it was to get around Singapore as all of the tourist sites were easy to get to with the help of the train. 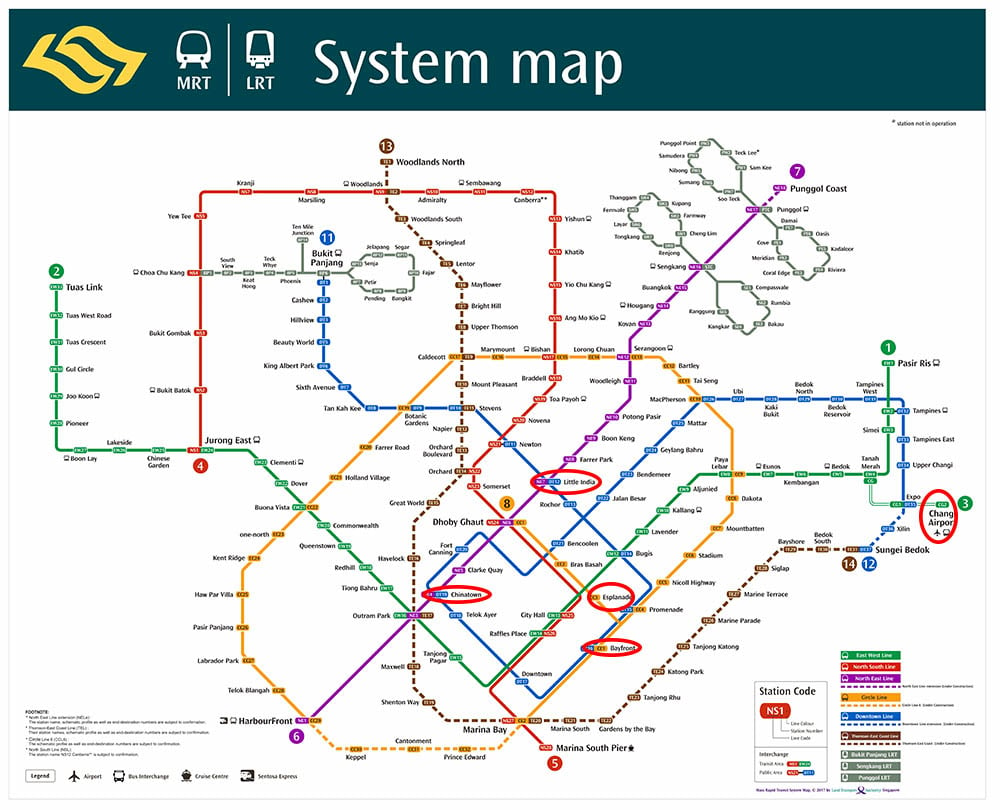 I’ve circled everywhere we would have gone if we could have gone to Raffles (Esplanade stop) and Little India so you can see how easy it is to get around.

I also appreciated how clean it was, but we hardly saw anyone around which we couldn’t get our heads around seeing as we saw a sea of high rises that went on and on. Now, I’m not meaning the tourist sites we went to, I’m talking about the trains which I’d assume were in rush hour at 8am and in general, it was very quiet. 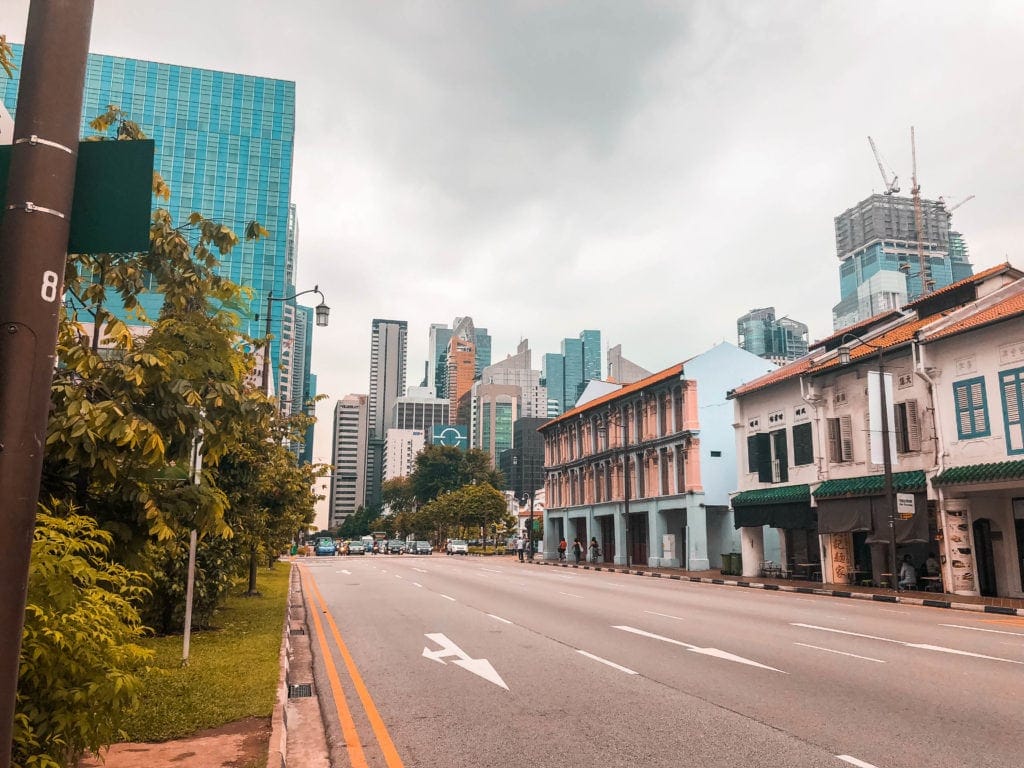 I also couldn’t get a sense of a vibe in Singapore, it just felt flat to us. Maybe it was because we hadn’t been there long enough but we got bored of it which is why we went back to the airport early. The airport alone is worth the transit if you’re on a long haul flight like from London – Sydney but I wouldn’t personally be going there for a holiday any time soon.

One thing I did learn was, it takes so much more time than you think to see everything. Raffles was off the list due to restoration, and we didn’t see Little India due to the rain, but what else did we miss? I know the zoo is supposed to be good but I’ve always felt a bit unsure about them as a whole. Obviously I’m sure there’s much, much more we missed out on, but with first impressions, I was glad it was just a stopover.

Make sure you check out our vlog of our time in Singapore below!

Have you been to Singapore? I’d love to know how you found it, just let me know in the comments below.