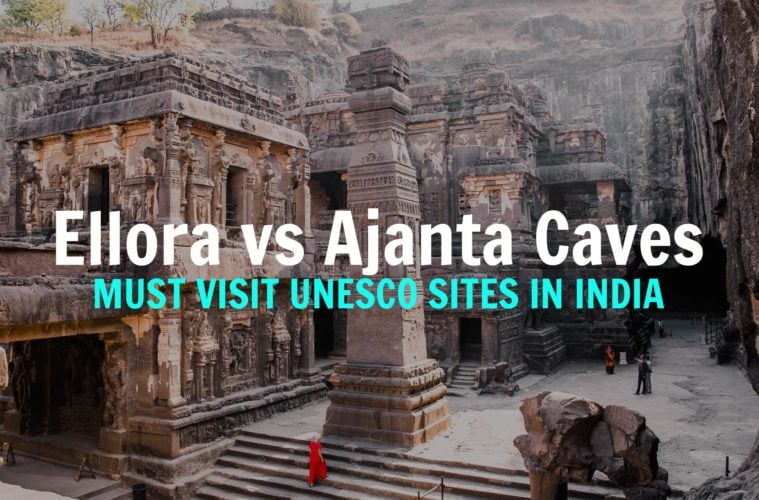 Why you need to visit Ellora and Ajanta Caves

After a relaxing few days in Goa, we made a beeline for Aurangabad (approximately 6 hours west of Mumbai) to visit the incredible Ajanta and Ellora Caves, some of the largest rock-cut cave complexes in the world.

If you’ve not heard of these caves before, put them on your bucket list because I’ve not seen anything more impressive in my life! If you’re also heading there and need  information about how to get to Ellora caves and want to know which ones to visit, read on below. 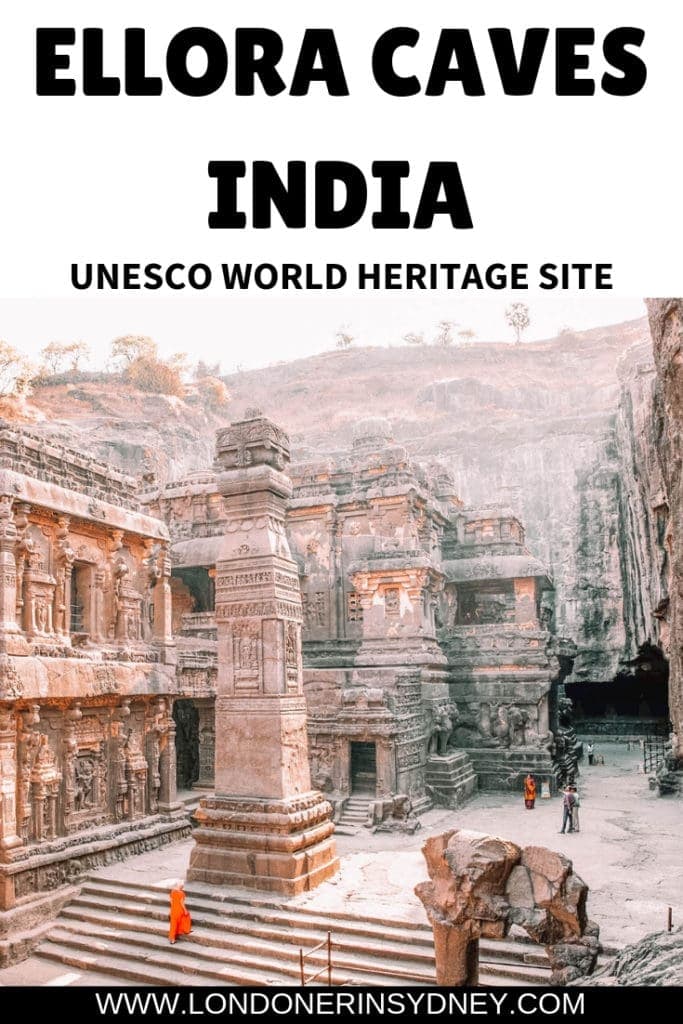 How to get to the Ellora and Ajanta caves

[wpgmza id=”78″]
If you happen to be coming from Goa, expect it to take a while. It took over an hour from North Goa to the train station in a taxi, then we got on the train at 4pm before having to change trains at Manmad at 10am the next day. It then took another 3 hours before we arrived in Aurangabad at 2pm which is the closest city to the caves (just 1 hour from Ellora and 2 hours to Ajanta).

If you’re coming from Mumbai, it’s just a 6 hour journey.

We then hired out a driver to take us to the caves over two days which cost R4000 (AU$80). You can sort this through your hotel. 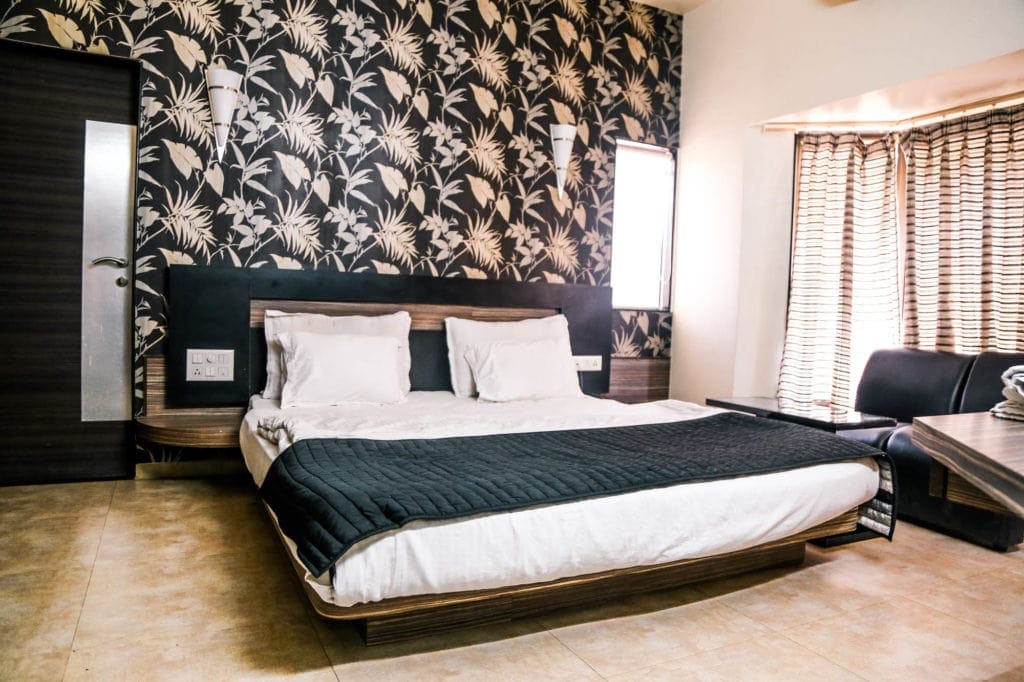 Our room at The Hotel Leaf in Aurangabad.

We stayed at The Hotel Leaf which was brilliant and exactly what we needed, a modern clean room with aircon (definitely needed for the time of year we went there as it was 40C in April 2018) with a comfy huge bed and TV, and a decent restaurant downstairs. 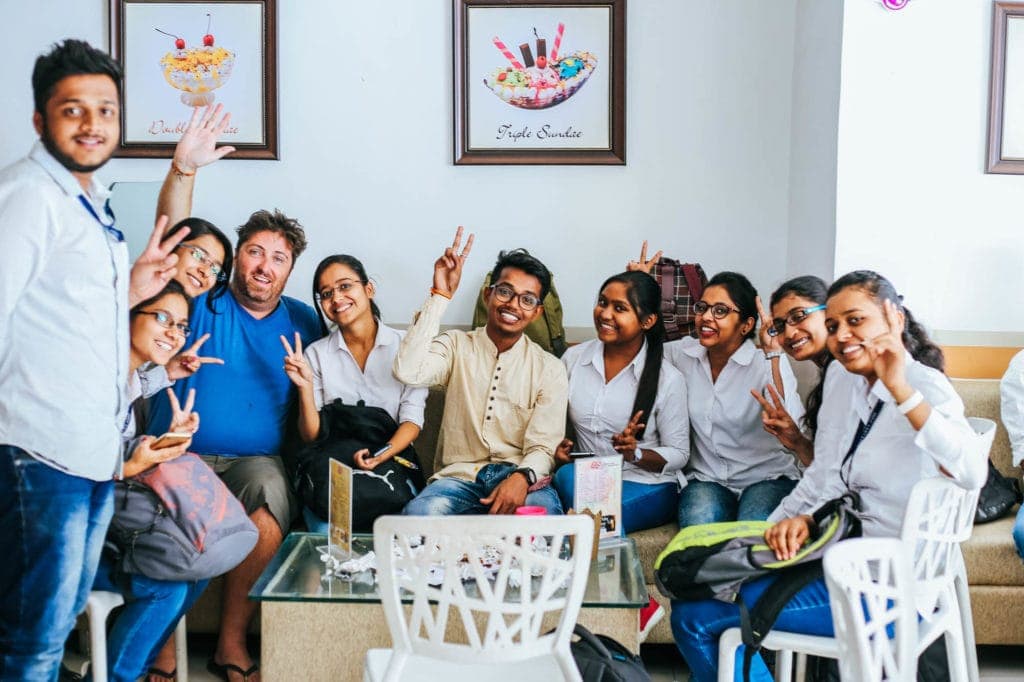 Stevo being a celebrity in the ice cream shop!

There were other restaurants around the corner as well as an ice cream shop which was a dream that one actually existed and it was right next to our hotel. Because we were only in Aurangabad for a couple of days, we didn’t see much of the city.

Get $76 off your first airbnb booking right here

If you’re looking for a great deal, then check out the below.


How did we hear about Ellora caves? 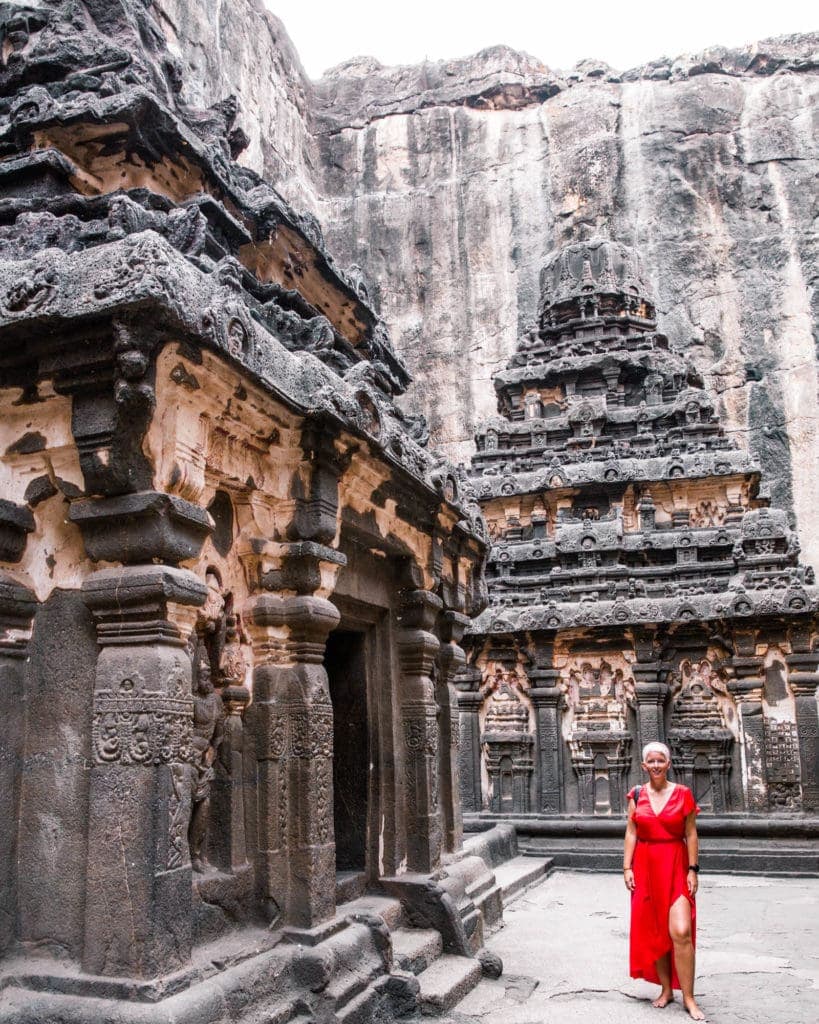 Funnily enough, whilst watching a documentary about British former model and actress, Joanna Lumley travelling around India, she featured the Ellora caves. We were absolutely blown away by it and knew we had to make the effort to go there.

It was actually so quiet at these caves, we couldn’t believe how they weren’t rammed full of tourists. It honestly felt like we had found one of the world’s biggest gems.

If I have only one day, do I visit Ellora or Ajanta Caves? 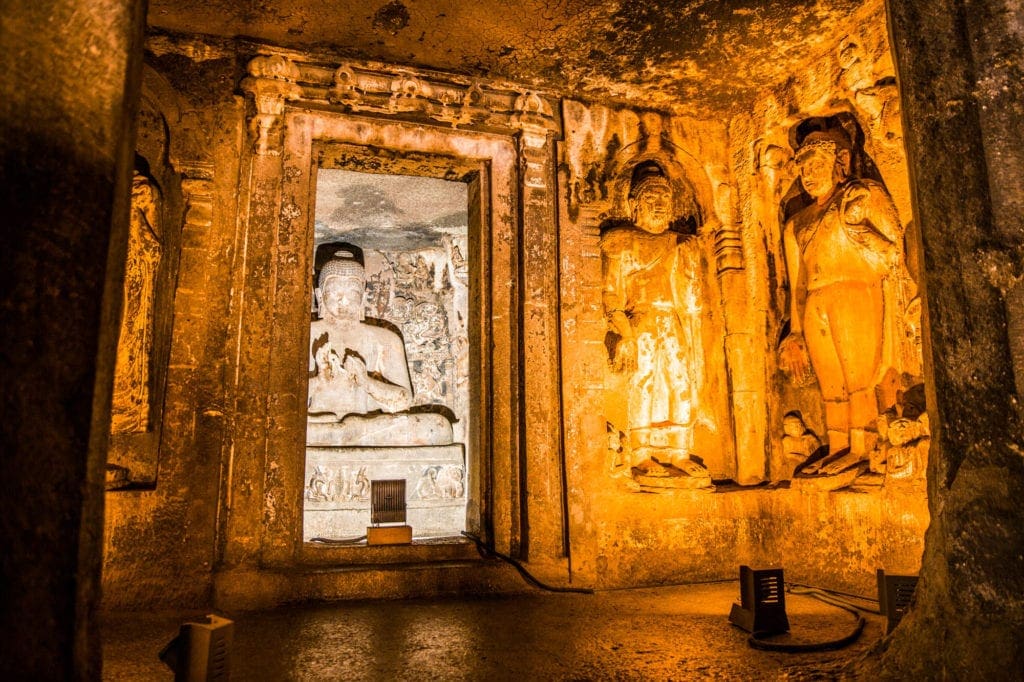 Inside one of the caves at Ajanta.

We didn’t know if we’d have time to visit both caves because of timings but luckily we saw them both. Be careful because Ajanta is closed on Mondays and Ellora is closed on Tuesdays. But if you had to pick only one cave to visit, which would it be? Here’s my rundown of what we experienced.

We hired a driver to take us to both caves. You could technically do both in one day at a massive stretch but I’m glad we spent two days seeing them because you really don’t want to be rushed. We spent the entire day at Ajanta Caves and after Ellora, we went to visit the mini taj mahal! Yes you heard it right… more on that later! 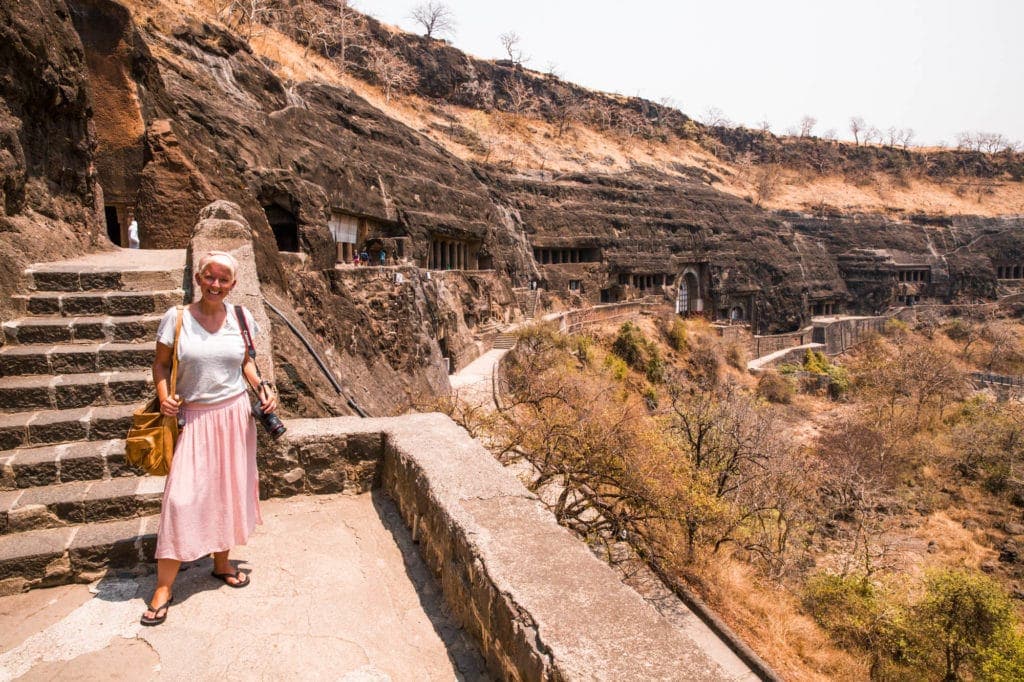 We started off with Ajanta because it was slightly more of a mission to get to and a bit further out of town, a two hour drive out of Aurangabad. The driver cost us R2500 for the day. Don’t expect a tour guide service as you’re only paying for a driver. What I loved about Ajanta was the setting of the caves. We honestly felt like we were in the middle of the desert, like in the middle of nowhere. It was such an amazing sight to see a cliff face with all these Buddhist caves dating back to the times of 2BC. 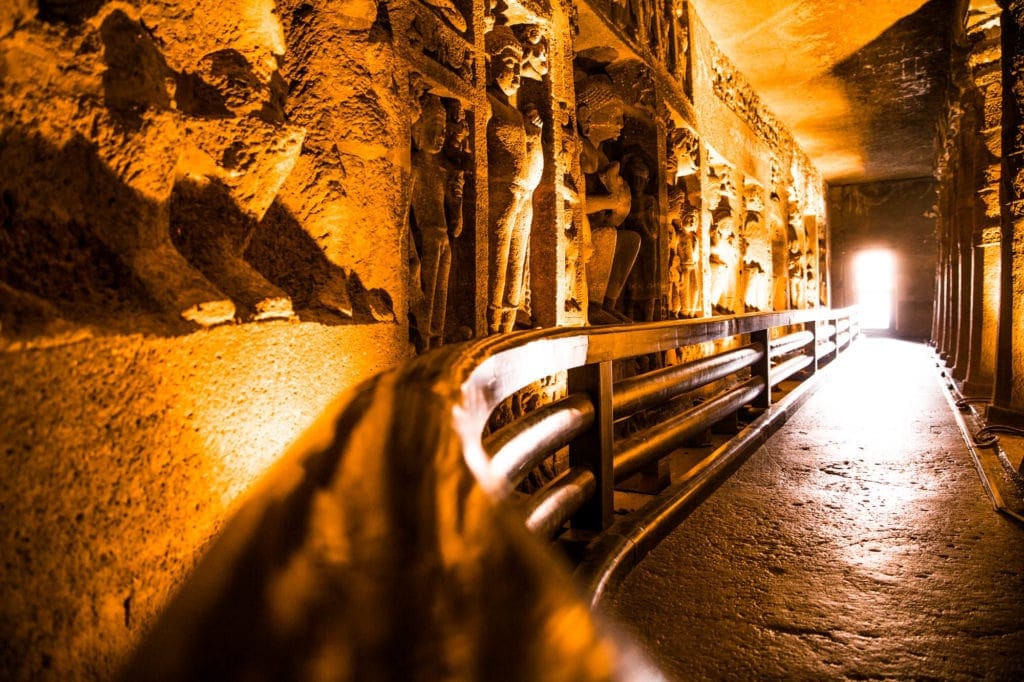 It’s set in a canyon and I’m sure when it’s during the right season, it would look even more magical with a river and waterfalls running through it after the monsoon. Maybe that’s why we didn’t see many Westerners or Indian tourists here because at 40C it was hot but, boy it was an incredible sight. 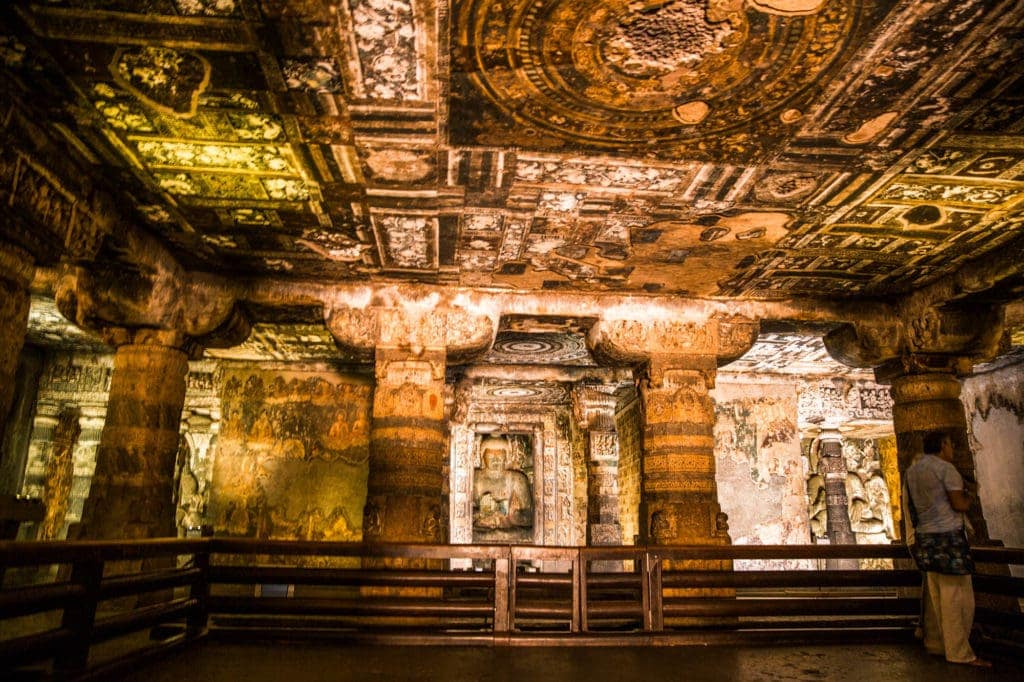 Each cave was completely different and it blew our minds how incredible the sight was, not only for the architecture but for the paintings inside. 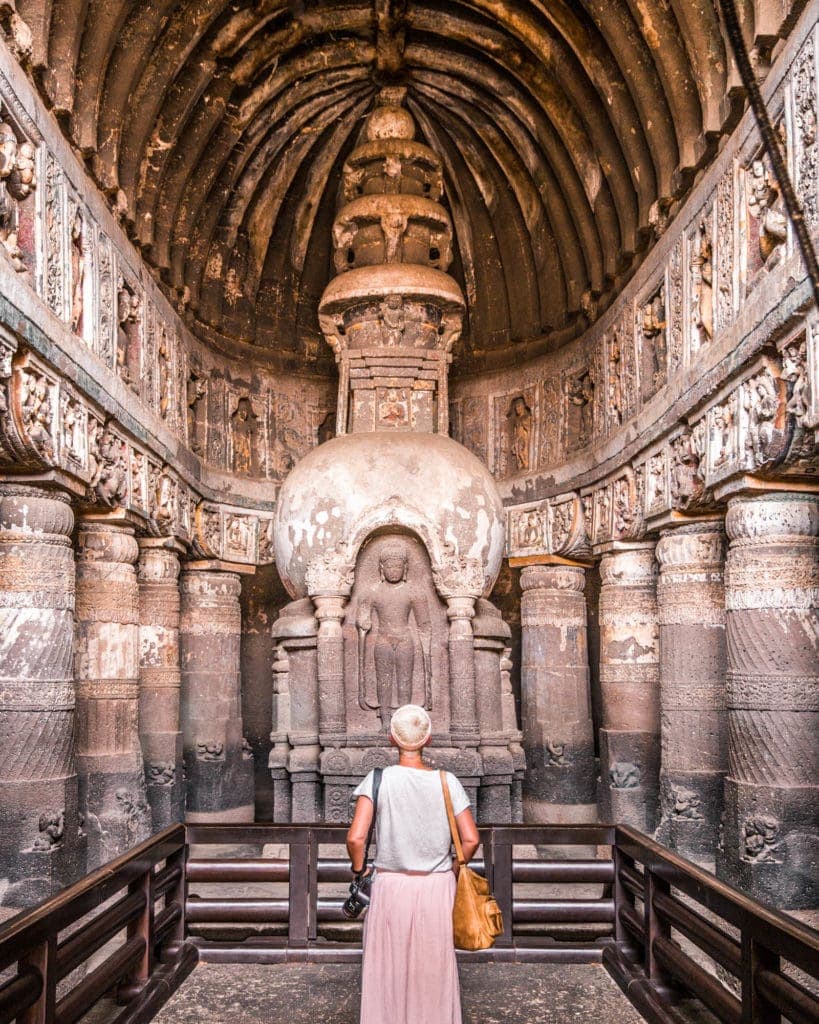 We met some Dutch tourists and they told us that these caves were a billion times better than the famous Petra sight in Jordan, a country we had been considering whether to visit next. Once I found out there’s actually nothing inside Petra, my mind was made up and I felt I didn’t need to visit there just yet. I was already more than satisfied with Ajanta and wondered whether I would spend the whole time comparing Petra to these caves. 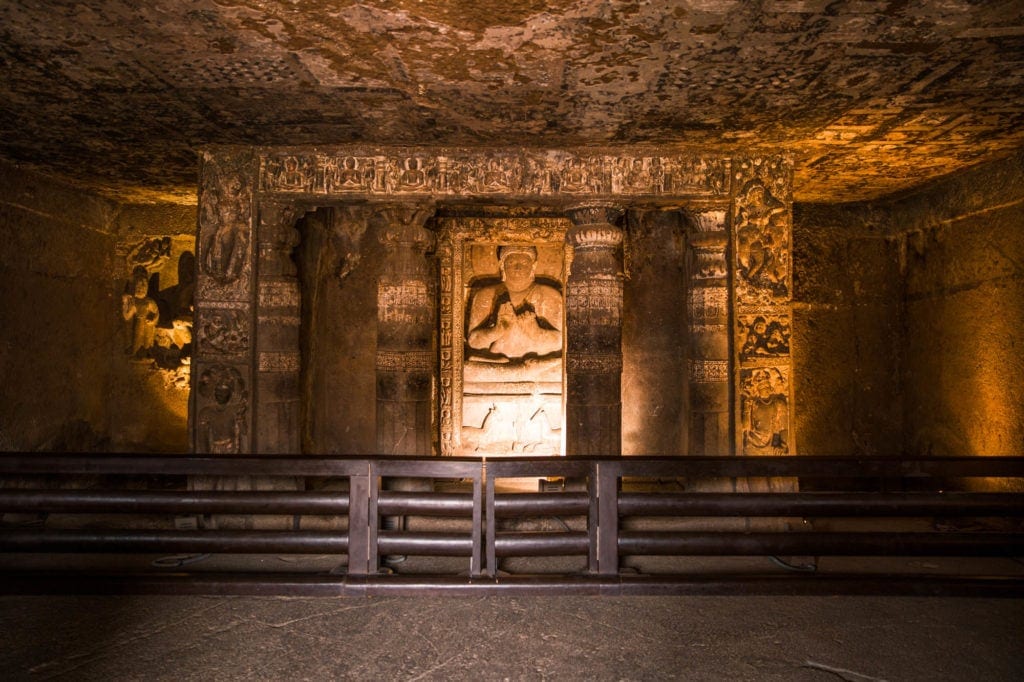 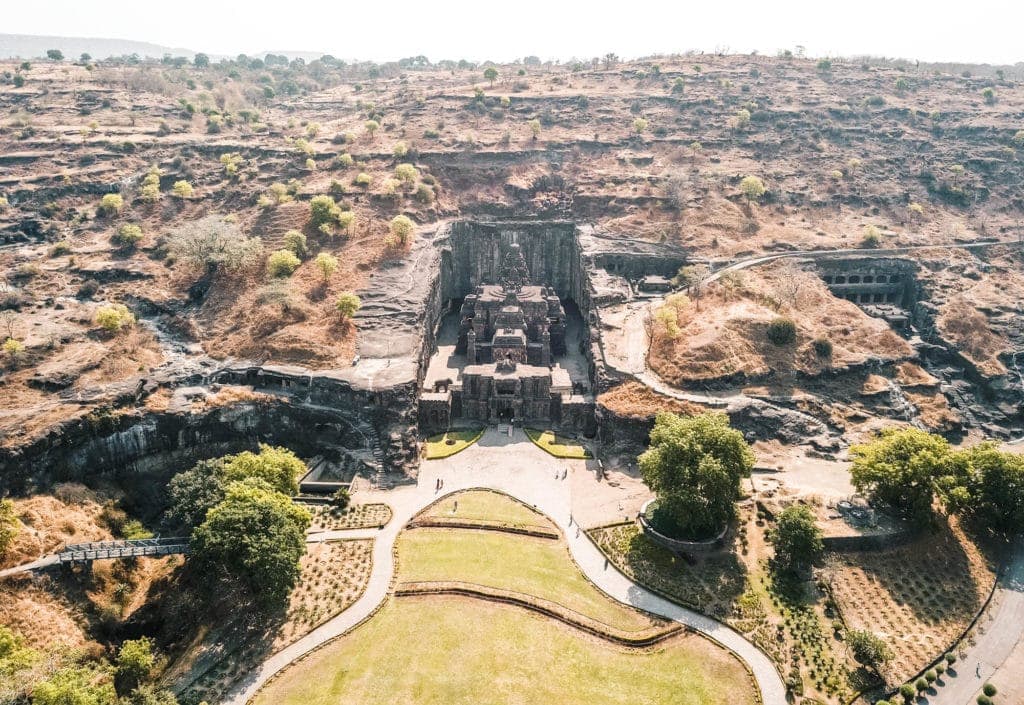 We managed to get a couple of drone shots at Ellora Caves!

Our same driver picked us up at 6:00am the next morning (for R1500) to go to Ellora because we wanted to get there for just after it opened before any crowds turned up. These caves are different to Ajanta because they were built as temples and monasteries to celebrate many different religions in India such as Buddhism, Hindu and Jain and although not as old as Ajanta they are still an impressive 600 AD. It is believed however that these caves might easily be a lot older than it’s told though. 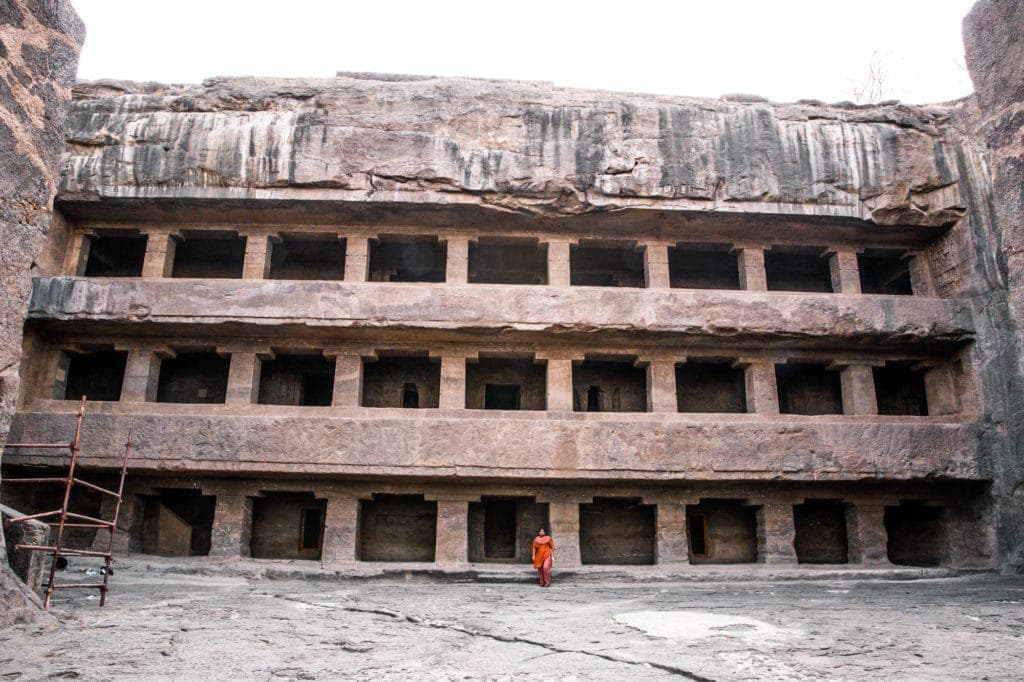 One of the monasteries at Ellora Caves.

The funny thing about Ellora is it’s set next to the main road which to me wasn’t as impressive as Ajanta.

BUT, the caves sight was incredibly impressive, especially cave number 16 below which is the largest and oldest temple in India, single handedly built out of one granite rock (how they did this I don’t know), and dedicated to Shiva.

It’s also twice the size of the Parthenon in Athens. 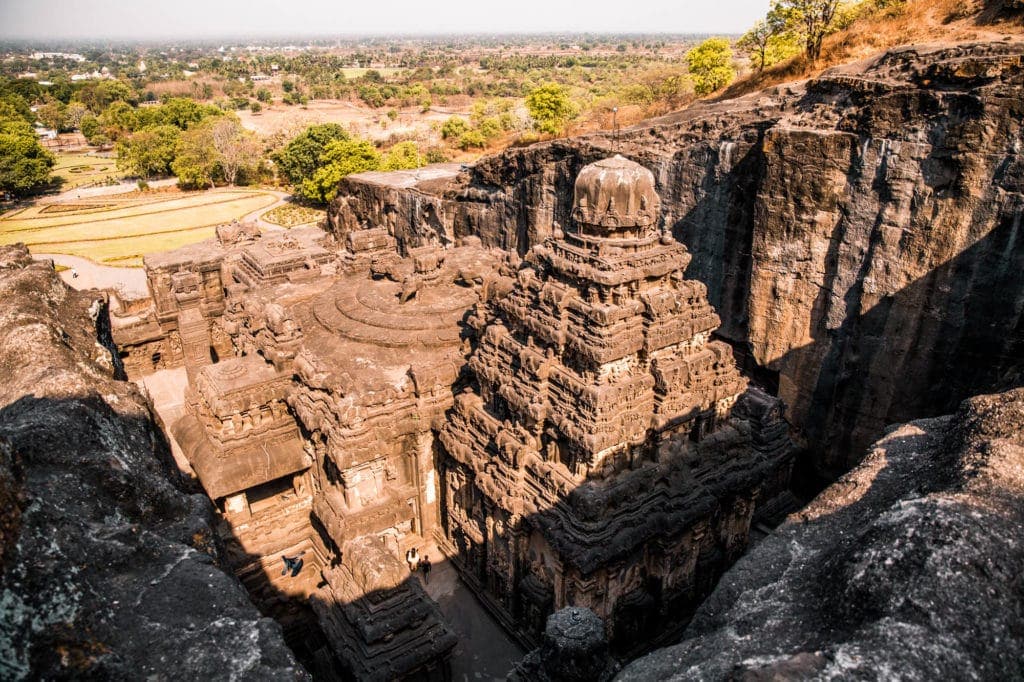 This time there were about half of the caves open to visit, around 16 of them (although there is a total of over 100 there). I think the rest were closed due to a cliff fall but the main cave to visit was the final cave, the one featured on that Joanna Lumley show.

It was huge, a sight you could spend ages wondering around and we spent a good few hours just totally overwhelmed with how amazing it was. 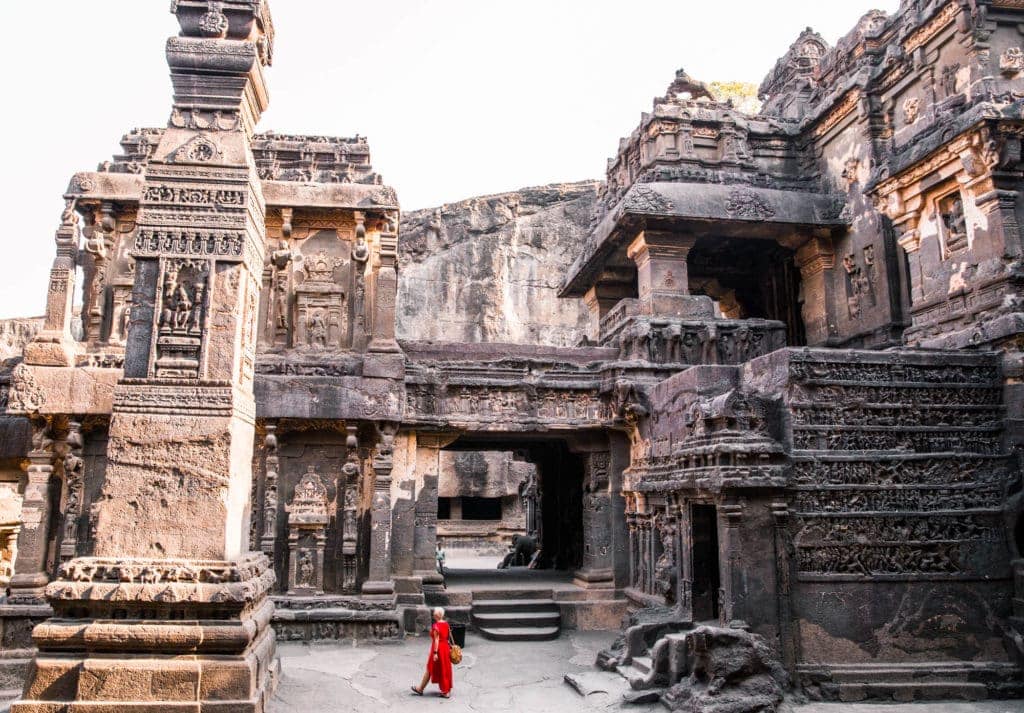 The only problem about Ellora caves for us was because it was easy to get to, there were so many Indian tourists who started to arrive about 20 minutes after us and then it became exhausting. They were really loud when walking into each cave (it’s really a place you want to be quiet to appreciate it), and every single one would ask us for a photo. At first I would say OK, then 50 of their friends would come into the photo and then all ask for one too.

I suppose you have to accept that Indian’s love a good photo with a Westerner but for us, it was way over the top and non stop that I had to start saying no that eventually we just left because it was all too much. 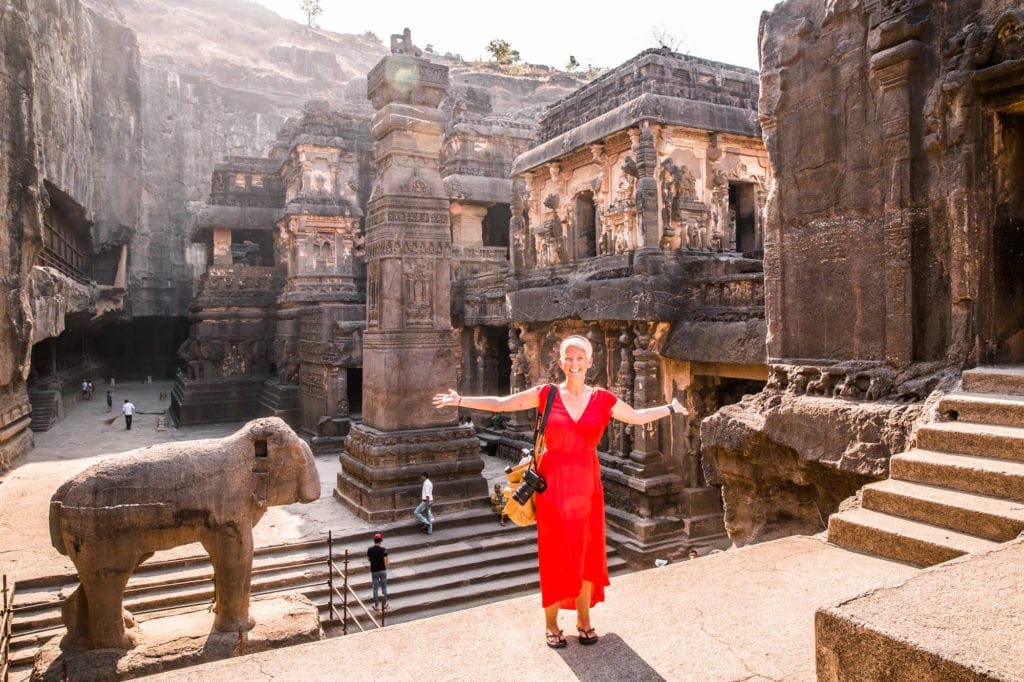 At Ellora Caves, but Ajanta was more special for us.

If I had to choose only one cave to visit, I’d go to Ajanta just because it was really amazing. We spent way more time there as we just zipped through Ellora until we got to the impressive big cave. That is worth in itself to visit hands down because it really is an incredible sight. But maybe it was because half of the caves weren’t open when we visited Ellora. To sum it up, Ellora is incredibly impressive for it’s architecture, whilst Ajanta is impressive for what’s inside the caves as the paintings are incredible. 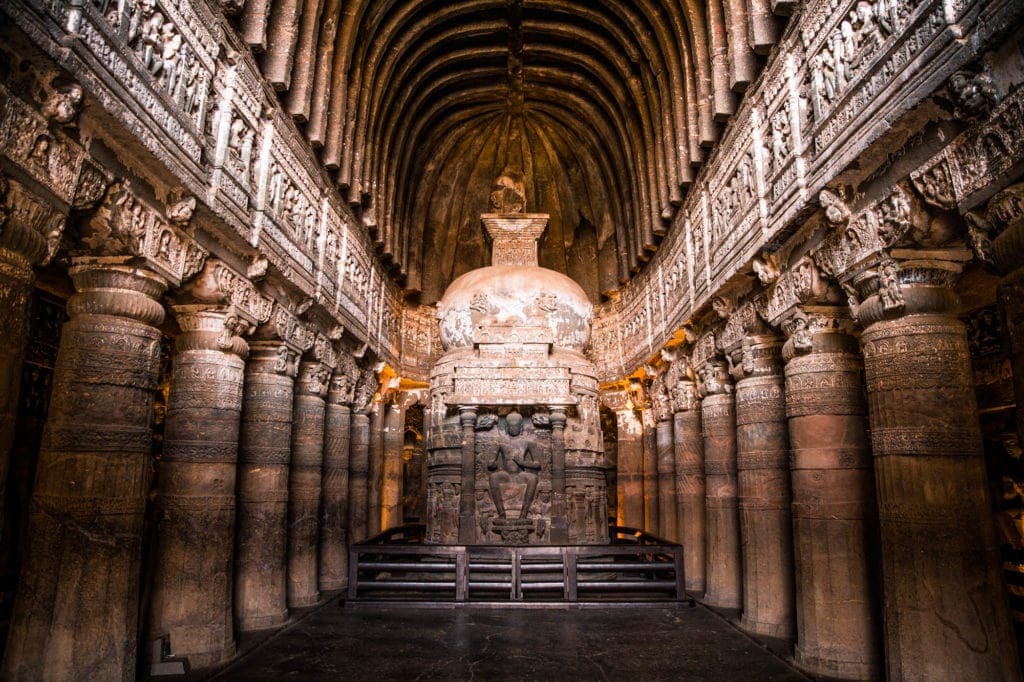 There were also other sites to visit in Aurangabad and after we visited Ellora, we were taken to the mini Taj, a crap replica of the top site itself. I thought this place was hilarious and loved it as we’ve both been to the main Taj before. At least there weren’t any crowds at this one 😉 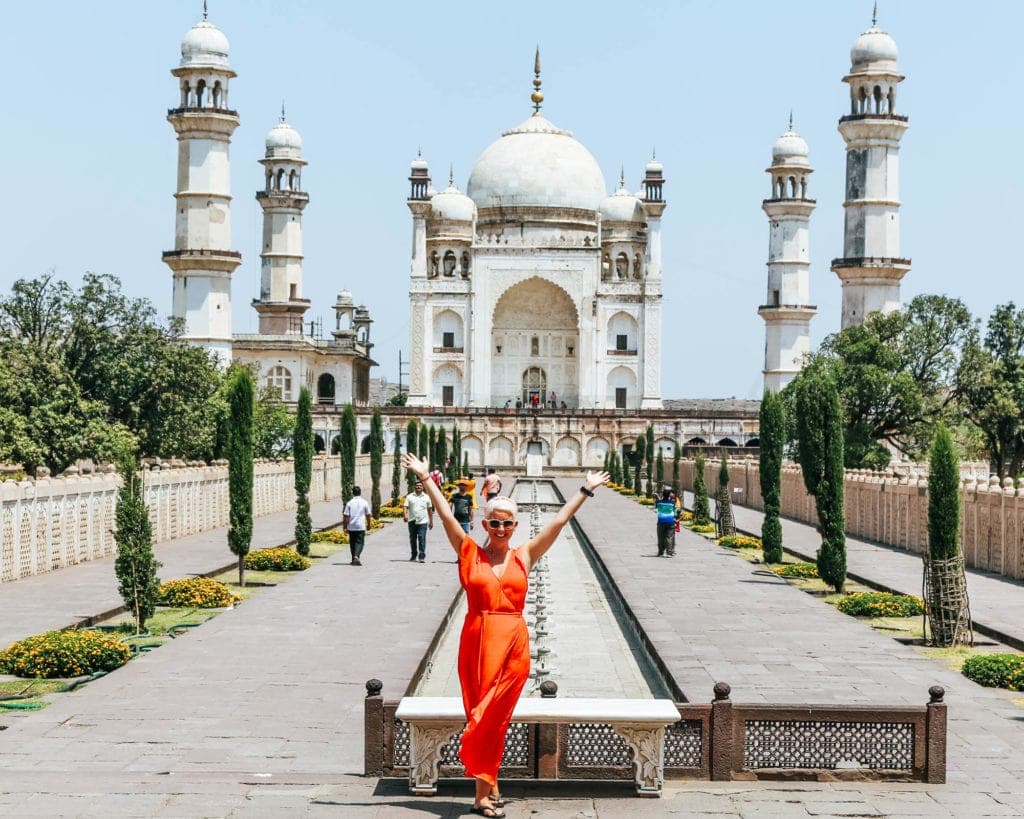 Loving the mini Taj in Aurangabad!

If you’re heading to India, put Ellora and Ajanta caves on your bucket list because they were easily the most impressive sites we saw during our entire 10 week trip in India, if not in the world! 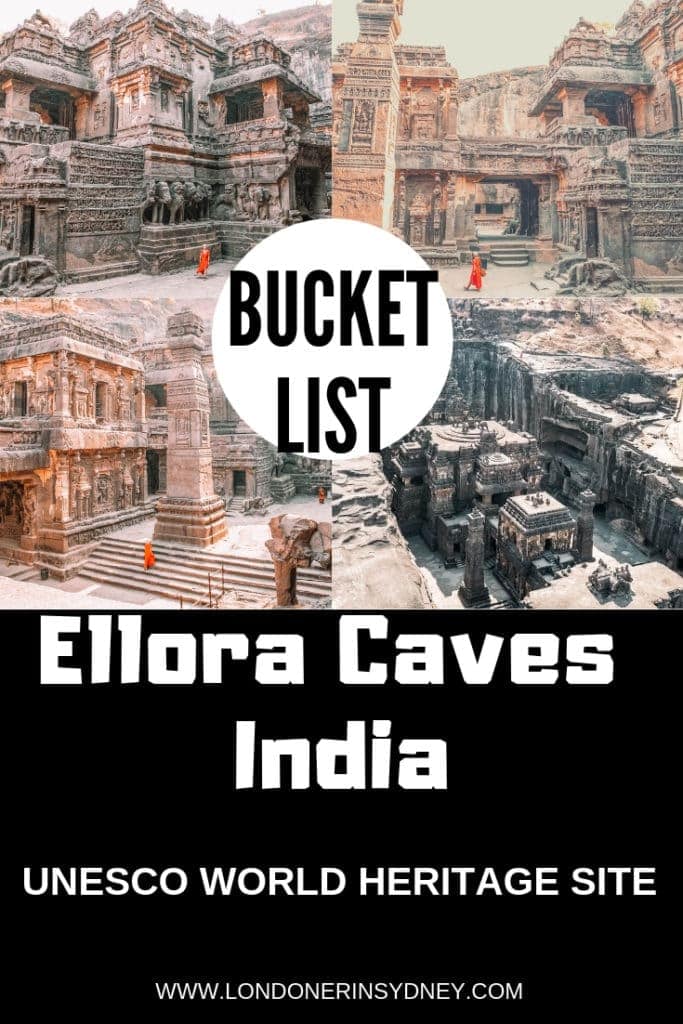