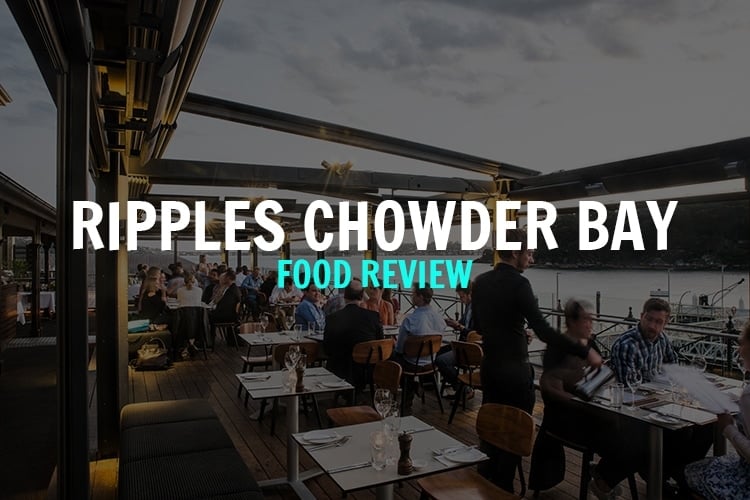 AnnieJuly 27, 2014
BlogWhere to eat in Sydney
Rate this post

Steve & I used to drive around a lot of  suburbs in Sydney to scope out a potential area to eventually move to in the future. We really like North Sydney for it’s quietness and stunning views across the harbour and one day while driving around the exclusive area of Mosman, we came across a restaurant called Ripples in Chowder Bay. It was perched on the edge of a cliff as we looked over from a park we randomly found placed in a small bay next to the water. We googled the restaurant and noticed they had a British chef who put on a Sunday Roast every week. We said we’d go there one day.

A few months later and after starting our little Sunday Roast Club in search of  proper good British Sunday Roast, we knew Ripples had to be on the list. So last weekend we picked up our Club buddies Jules & Bex and headed over to the North Shore. Jules & Bex are quite new to Sydney and had no idea where we were taking them. Seeing as the Roast wasn’t starting until 6pm, we were driving in the dark through a residential area. We ended up parking next to a Navy Base and started to walk down to find the restaurant.

One of the reasons we booked was because they were putting on an Aussie tradition of Christmas In July. I’ve never experienced this before, had no idea what we were in for but thought it would be fun! Obviously its summer at Christmas time here where most people will have a salad or BBQ for Christmas Lunch so there is a big tradition of seeing people celebrate Christmas with a roast dinner in July. It’s quite weird seeing people wearing Christmas jumpers and I’m thinking ‘this is so wrong for this time of the year…’

When we arrived, the restaurant was packed full of families wearing their party hats and having fun. It was beautifully decorated with mainly fairy lights lighting up the tables. We were showed to our seats by well presented staff to a table full of christmas crackers. This was lovely and nostalgic! We then had a set menu and this is what we had all for $35 per person. Massive bargain!!! And it was also BYO wine which we did and we were given an ice bucket straight away.

Sides of potatoes, brussel sprouts, carrots and parsnips (we could order as much as we liked for free)

Stevo and Jules had the roast pork and Steve said it was the best pork he had ever eaten. The roast turkey was also amazing. The whole food was amazing. Not knowing how much extra the bread was an an entre, it was amazing too. I loved the fact that we could keep on ordering more roast potatoes and veggies free of charge. The sticky toffee pudding was also awesome and we were all incredibly full by the end. They even did a raffle for a free meal which was a nice touch and the person who won was actually celebrating their birthday there which was nice.

Overall, this place is awesome. The people dining there were more of the upper middle class but that’s expected if you are going to go for dinner in Mosman but these are the type of people where there is no pretentiousness in sight. I always find that people with less money try to make out they have more than they do and end up coming across really arrogant and very unfriendly. Why is that? It was similar when I worked in Radio where you’d meet a lot of famous people and it was always the way that the more famous the celeb was, the friendlier they were. If it was a band that had released a single, they would just be a nightmare to deal with. Sydney seems to have a lot of young people acting like they are the band whose had that one single out. It’s funny to watch!

I feel like Ripples is a really well kept secret hidden in the middle of Mosman that produces amazing food, professional staff and a beautiful landscape to look out onto. We all couldn’t believe the value for our money, I doubt you’d find this quality and price anywhere in Sydney. At the moment, we are all putting our money into Ripples being the best roast so far and totally out weighs the one we had at The Lord Dudley a week or so before. And so, the hunt still continues. Will we find anywhere as good as this? Let’s see.