Hi there, we’re Annie & Steve and we started Londoner In Sydney back in 2014 as a guide to help expats moving to Australia.

Little did we know back then that Londoner In Sydney would grow into having a monthly audience of 130,000+ readers which is insane when we think about it.

We’ve built Londoner In Sydney to be a resource for anyone moving to Australia in a honest and authentic guide. We’ll tell you how it truely is to live a life in Australia as an expat.

You’ll also find some of our travels around the world. We’ve included this aspect because our blog is about inspiring others to visit some the awesome places we’ve seen around the world too.

If you’re interested in getting stuck into our content, go to our Start Here page. Here we’ve broken down all of the popular parts on our blog so you can get a clear understanding and find out what content our readers love the most.

Take Me To Your Start Here Page

If you’re interested in our story about how we met, we think it’s a good un. So we’ve decided to share it with you below!

How did we meet?

Let’s take a little step back from the blog for a minute; we absolutely LOVE to travel.

You know, we actually met during a meditation retreat in the Himalayas (in the town where the Dalai Lama lives) in India back in 2011.

Annie had just started her six months trip around the world as she gave up the corporate London life and Stevo was at the end of his one year away.

Read more: The best meditation retreat in the world

We were put into the same small group within the retreat where we had one hour a day to talk about Buddhist topics. It was there Annie started to have a crush on Stevo (because let’s face it, she has a thing for Aussie men) and fast forward to a few weeks later, we bumped into each other in the very North of India, right in the middle of the Himalayas.

Stevo convinced Annie to go on a trek the next day and before we knew it, we shared our first kiss 4,000 metres above sea level right in the heart of the mountains.

Side note, trying to kiss that high up is actually pretty impossible!

So we spent three weeks infatuated with each other and travelled around India together. Annie’s visa unfortunately ran out and on our final day together in India we had thousands of Indians watch us whilst we had an emotional goodbye at Jaipur train station. Imagine people hanging out of the train doors, the windows, the top of the trains, on the platforms, everywhere. Everyone watched us and it felt like we were in our own movie as Annie got on the train to Agra with tears running down her face.

Fast forward to a month later Annie was working in a tourist bar on Koh Tao island in Thailand and Stevo had been sunning himself on the Andaman Islands.

One day we were both online at the same time and skyped each other. After three hours of talking, Annie convinced Stevo to come and visit her in Thailand before he was to embark on a teaching career in Taiwan.

Within a few weeks, Stevo changed his plans at the last minute, and told Annie he was coming to Bangkok in a few days time. So Annie fled her current trip around Cambodia and made a beeline back to Bangkok. It was then she knew it would be her final few days before spending the rest of her life with Stevo. Mind you, we only knew each other for a couple of months beforehand, but she just KNEW he was the one.

Meeting each other at Bangkok airport was literally like another scene from a movie. Annie jumped over the barriers at the arrivals gate and when Steve walked through, he flung his backpack off and they just ran towards each other. Hundreds of people watched on as we faced one of the most romantic moments of our lives!

From that day on, we’ve travelled to over 30 countries together, spent pretty much every single day side by side and we are now living our dream of inspiring others to travel and helping people live an awesome life in Australia.

Thanks for following along, we really do appreciate it!

Top 25 Expat Blog In The World 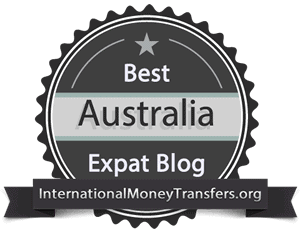